We believe in Rescue Dogs --
Dolly was one, Doogie was one
There are so many dogs without homes
That it makes sense to adopt rather than buy a new puppy

And with the internet it's rather easy!
Petfinder.com
Makes it easy

We didn't care whether it was male or female

Browsing the net, this picture came up: 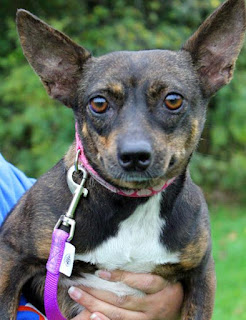 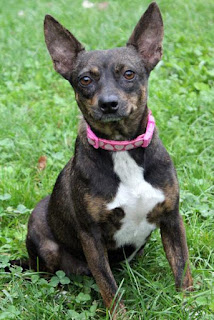 She had a look about her!
A mostly Rat Terrier look

But there was a "catch"
The Humane Society of Greater Kansas City prefers to adopt in the Kansas City area
But it does make exceptions.

It was a good meet and greet.

We interviewed a couple of other "applicants"
Which were immediately dismissed by Doogie with a low growl.

Husband Jim, however, wanted "Senshi" since we first laid eyes on her.
I was the one who insisted that we interview others. 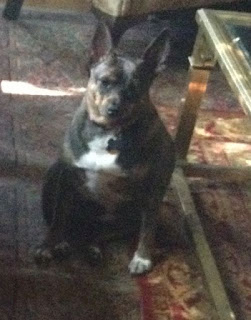 Doogie greeted her like an old friend
And even invited her to play
But she was tired and wanted to rest.
And deemed under the coffee table as her "safe place"
(The sofa is Doogie's)

The first night went well . . .
And this morning 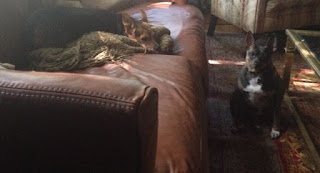 She came out from under the coffee table 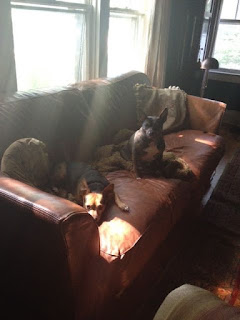 And joined Doogie on the sofa 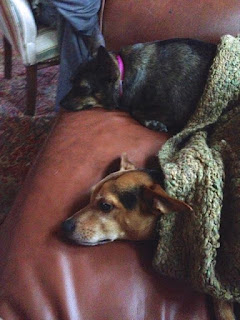 Both decide that it is the perfect place for a nap!

She's not totally acclimated to Linderhof
But she's getting there.

And I can't preach "RESCUE" enough
There are so many homeless dogs
The good thing, though, is that are a good many no-kill shelters

If you're looking for a dog, please look at a shelter to see if you can find a dog
that will fit.

And wherever you get your dog -- spay and neuter --
I can't say that enough!
That's why there are often so many dogs in shelters!

They are there, just waiting for someone to love them
And the love they give in return . . .

Congratulations on Daisy! She's quite lucky to be at your loving home. We recently lost our Winston (french bulldog), hubby is devasted. We have one sweet poodle left. For now I say no more but if I ever change my mind will certainly consider your suggestion. Enjoy your Daisy.

What a lovely story to read tonight, Martha!!! Our Biscuit is rescue dog for sure...was abandoned and then on end list with one day left in Pittsburg. We saved her and brought her home. I wish we brave as you to take on more than one! I know you will all make a nice family!!!!

There is a special place in heaven for people that rescue animals - any animal. We have four rescues right now and if Vet bills weren't so expensive, I would have more. Keep up the good work.

Lucy -- it is HARD to lose a dog -- however, we find that two entertain one another and make it easier on the dogs when you go away for the day!

Oh Martha, that is so very sweet! Congrats on the new dog, the new rescue dog. Our little Yorkie that we just lost was also a rescue dog and our next one will be too.
I know you and hubby will have fun watching the two dogs warm up to each other.
Take care,
Gina

Awwww..... Daisy is so sweet looking and I'm so glad that Doogie gets along with her. It was obviously meant to be :)

I have had all kinds of rescue dogs. In fact, Mini is one. She followed my daughter home one day. We found the owner, but it turns out he had let her go and didn't want her, so we took her in.

I think Daisy Dawg is gorgeous!!!!! What a sweetie and so dear of Doogie to share "his" sofa;) So happy for your family! Love that we're all sharing adoption as the way to go!!!
joan