Somewhere we bought the old wheelbarrow
I'm really not sure why
But we did
And the first year we had it we planted it with pansies
In the fall . . .
(Much to my disdain -- I sent The Great Scott to the store for mums --
And he brought home pansies!
That was the year I learned what a joy pansies were
A mild winter and the wheelbarrow was abloom for most of it) 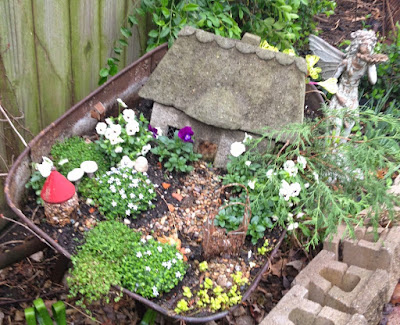 And it does
With a wee cottage, an arbor, plants, a bath and fairies here and there and even a potting
shed, similar to the one at Linderhof! 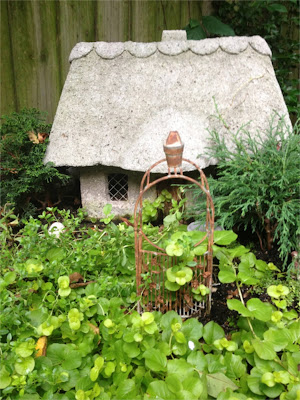 The cottage I made myself at a class!
It looks like some of the cottages we saw in England
I must saw that come July, the fairies are not very tidy gardeners!

Yesterday, I was at Red Cedar and fell in love
With a myrtle topiary made into a "wee" fairy garden
Alas, it was more than my purse could bear
But they did have the components
And the components were very reasonable 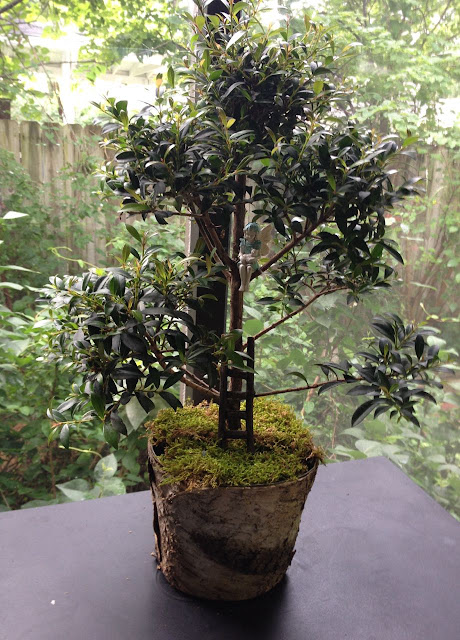 And so it all came home with me
I put it together this morning
It's a charming fairy garden
for inside!
I had the birch planter which I think is even more perfect for this fairy garden
Than the pot that theirs was in!
It lends a woodsy air to the garden! 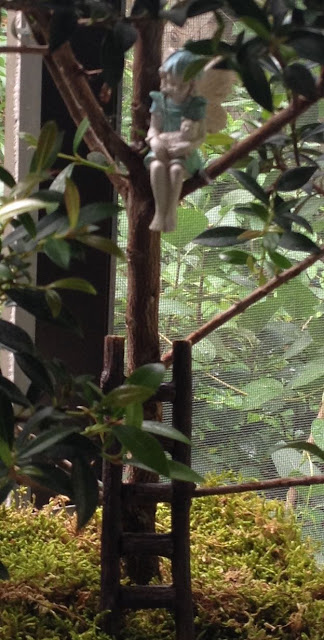 A little moss to cover the soil,
a wee ladder
And a fairy in the "tree" holding a cat!

It reminds me of my childhood
When I would prop a ladder to a tree and climb up on a low branch
And sit and take in my surroundings from this high up perch.
Sometimes I would even take a book and read!

And while at Red Cedar, I also bought a house and things
to transform a planter into a fairy garden for Grand Girl Lucy --
her second birthday present from Poppy and Nana.

I climbed up and up and read for hours in our weeping beech.
Margaret

I think Lucy will enjoy seeing all this!

Hi Martha,
I have always liked the idea of having a fairy garden in a wheel barrow, very cute! Your new purchase is darling too! What fun for Lucy!
Gina

We did a similar idea with a wheelbarrow, yours turned out great!! I would recommend checking out eFaries.com They have oodles of really neat fairy garden things, and their shipping is just great.