When we moved to Linderhof we used it first as a secondary television room
And then when we got home computers, as an office/television room
When it was the "office" it saw a lot of use
But with laptops, you don't need a dedicated office space.

A few years ago, the flashing on the chimney failed
and the wall suffered water damage
I should have taken before pictures
but I didn't and so I found some old pictures of the room before
I got to be really good at taking pictures from angles that did not show the damage! 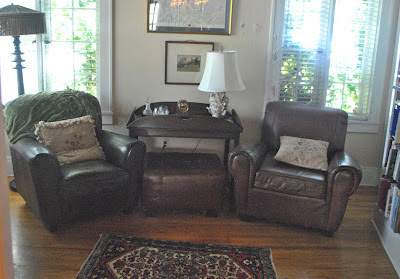 The damage originally was mostly above the large picture on the wall
But then it got worse and that wallpaper came loose and I took it off
exposing the plaster wall
(And whenever I looked at it, I just pretended that I was in Italy and it was "trendy"
-- hey, it works well for Italians) 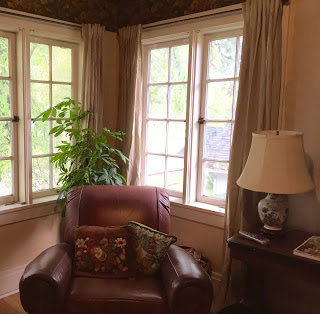 There was a Victorian dark green border around the room
(remember when borders were all the thing?   This one came from Victorian Trading Company --
from their outlet store and had been up at least 10 years)
And the ceiling had been painted the dark green of the paper
The walls a sort of beige

Sometimes it takes a while to get things done

Thursday the workmen came
And pulled off the paper 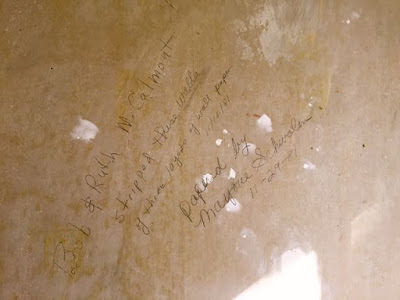 A voice from the past
Ruth who was mistress of Linderhof before I
(but not the one we bought the house from)
had left a message . . . .

And the worked and mudded and primed and painted Thursday and Friday
And Friday evening . . . 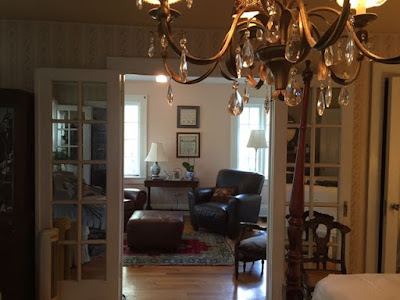 The sunroom was put back together and looked like this! 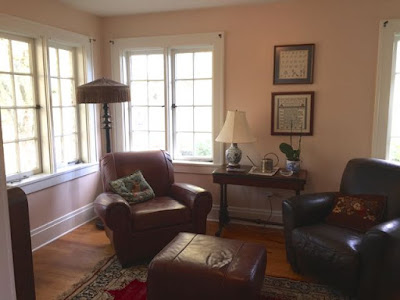 Furniture all in place
But alas, no curtains at the windows
I had yet to iron the curtains! 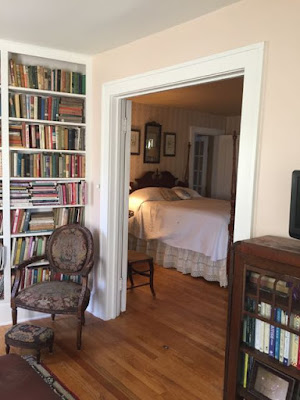 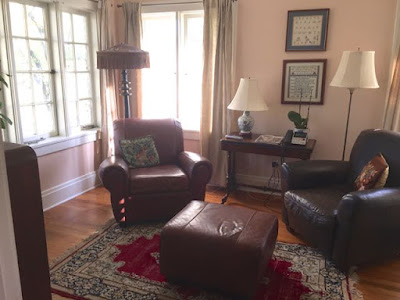 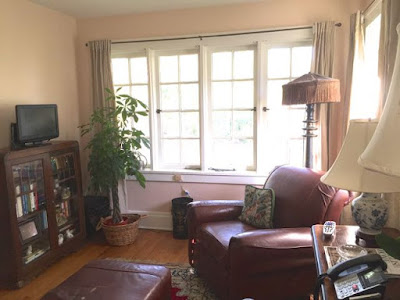 Looking from the bookcase wall to the front of the room 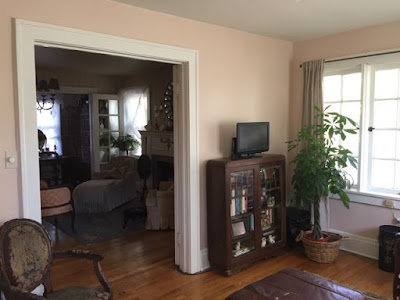 And the bedroom wall which is really more door than wall! 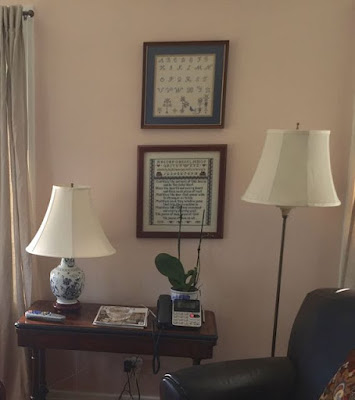 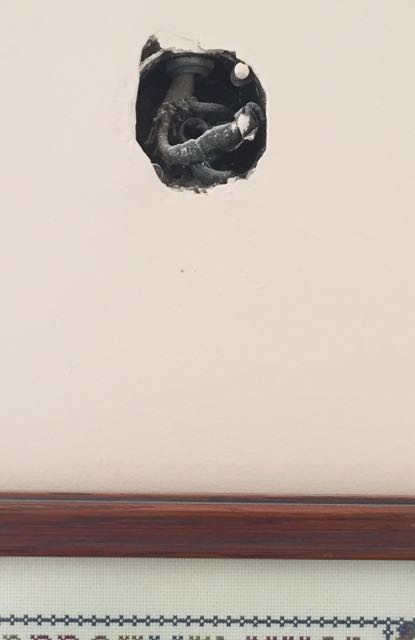 Wiring
For a sconce
I had them leave it as is and not cover it up
For I'm still on the fence about whether I want to add a sconce or not! 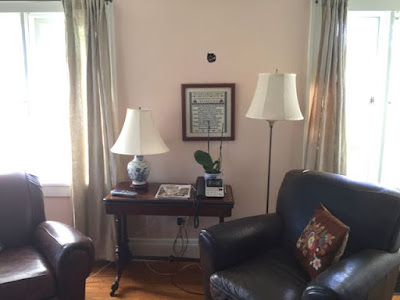 Obviously, if I do, I'd remove at least one of the lamps
Too much lamp concentration for me!

And what, you might ask, did I do with the writing on the wall?

I took a picture of it 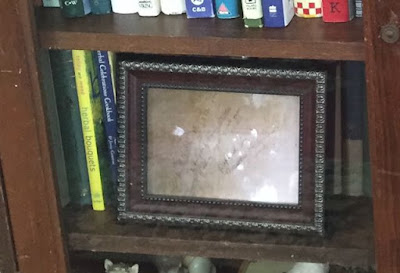 Had an enlargement made and framed it 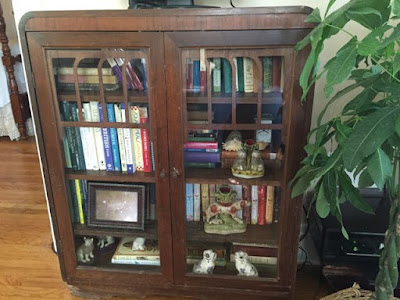 And put it on a shelf in the bookcase
Which is just below the spot that we found the writing!

The bookcase itself is special to me
My parents started their housekeeping with it!
And it used to store the set of children's books which they bought for me
Which I loved!

It seems perfect for this spot!
And it hold many happy memories for me!

It's Monday and I'm sharing my Sunroom Redo with Susan at Between Naps On the Porch for Met
Monday.

And I'm sharing my Sunroom Redo with Marty at A Stroll Thru Life for Inspire Me Tuesday.
Posted by Martha at 6:37 PM

What an awesome post - room looks great - love the wallpaper surprise note. Glad you honored the people who thought of doing so. Somehow it is good kharma or something.

Wht a nice space to have off a master bedroom! Light and bright! : - )

That is such a nice room, Martha, and you have worked so very hard on it. We have done some maintenance this past summer, too, and it is such a good feeling to have it done. By the way, I have left you a personal message.

That looks fabulous all complete. Love your hardwood floors too with the rugs being a focal point!

Thanks for the tour. Such a nice space. Always fun to find notes from the past. Whenever we open a wall or something where we can write a note in our house we do. Maybe someday, they'll be found by another owner.

This looks lovely and I really enjoyed the fact that you framed a photo of the writing on the wall. Your home has a very warm feeling.

It looks beautiful, Martha.
Finding that little note from the past is a treat and I love how you have honoured the past by framing a photo of it.

Martha,
Mystery solved!!!
I adore finding "hidden secrets" to one's home!!!
The sunroom looks magnificent, dear friend!!!
I'm sure it will provide many more entertaining hours. . .
and that you'll add some special memories of your own!!!
Fondly,
Pat

You have a most beautifully decorated home. Your sunroom changes turned out wonderful. I love how you took a picture of the writing on the wall and framed it. Good idea to keep the wires available for a future light to hang. Someday you might just come across the perfect one.

What a wonderful room! Like a little sitting room off the master bedroom! I love the idea of as sconce!