When one gets to be a teen, spending Sundays at Grandma's isn't as much fun as it used to be!
In fact, it was like "not again"
For you see there wasn't cousins to play with --
it was just my brother and I -- just like it always was at home
And although I had a doting Grandma and Aunt,
it was like I wished I were anywhere but there!

And to entertain myself,
I sat in my Uncle Clinton's recliner
and read my Grandma's cookbook 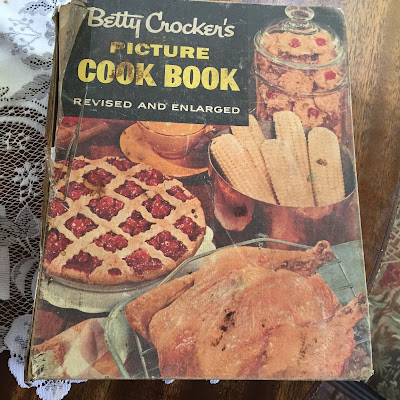 It had sort of stories and there was a section on meal planning with meals from famous people,
It's circa 1956, Second Edition, First Printing
I'm sure my Aunt Pearl got it for Grandma
And as far as I know, it was Grandma's only cookbook!

And when I got married in 1969,
my mother gifted me with my very own Betty Crocker Cookbook
It was the "New" Picture Cookbook 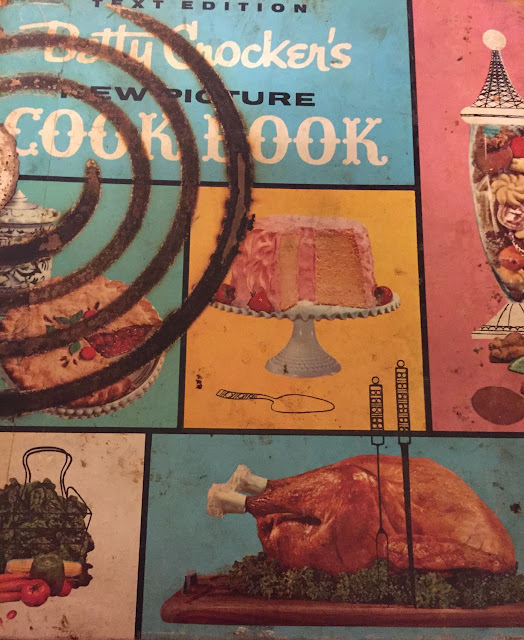 My book is a little the worse for wear
Having been used to a gas stove, we lived in a house with an electric one
I didn't realize that when you turned off the burner it was still "on" and "hot"
My cookbook has a lasting memory of that!

The first meal I ever cooked
was from the pages of
The Betty Crocker Picture Cookbook
Grandma's copy
The family took a trip to Colorado
leaving me and Grandma at home
Grandma consented to let me cook.
I even made a grocery list and we went to the grocery store
and brought back bags of provisions! 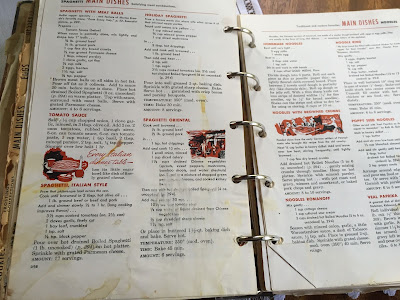 It's the Spaghetti and Meatballs
As you can see there are stains on the pages
Stains I made!
When I fixed that dish!

And I still make it every once in a while.
Sure it's easy to buy frozen meatballs and jarred sauce
But the "real deal" tastes so much better! 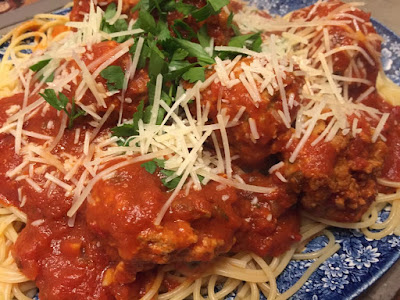 And it looks so appetizing on a big platter 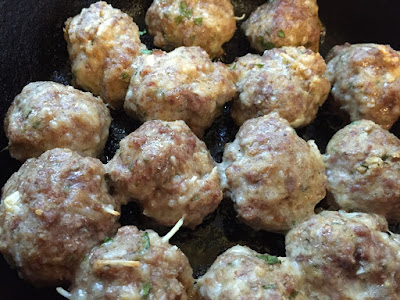 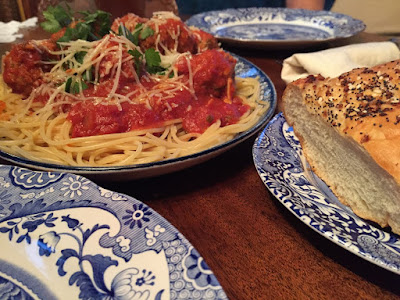 Served "family style" after a salad dressed with Wishbone Italian dressing
and some old fashioned "garlic bread" to go with! 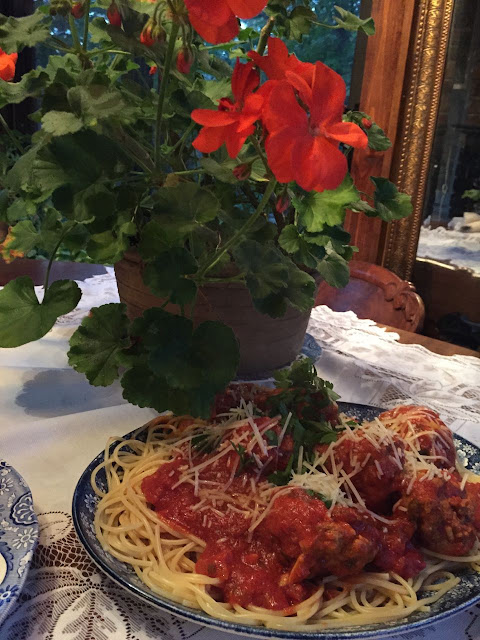 It makes for a good fall supper
When the temperatures fall!

My other favorite
is also my Daughter Sarah's favorite 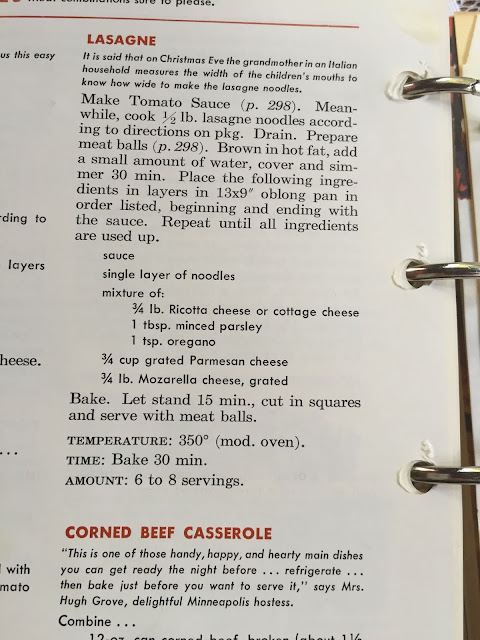 Now Ricotta can be found at Wal Mart!
Sigh! 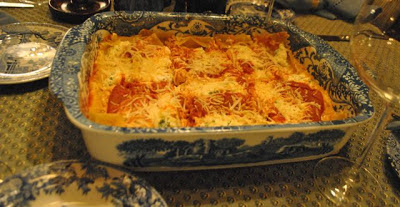 This for years was Daughter Sarah's birthday dinner
And I still make it occasionally
It's a good company dish
And everyone seems to like it.

Betty calls for serving meatballs along side
We never do.  Preferring the lasagne alone. 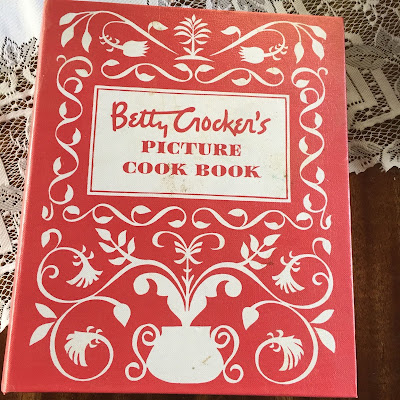 It was groundbreaking at the time
For most cookbooks were just the printed recipe
This had pictures of "how to's", finished dishes, table settings

The one is pristine
For I still prefer to use my original or Grandma's!

And Betty Crocker has a special place in our lives
For Daughter Sarah works for her!

Well, sort of, I guess --
she works for General Mills
which is Betty's company!

One of the things I liked about the cookbooks
was a peek into the "test kitchens" at General Mills
And one was very modern, very 50s!

When Daughter Sarah first started working at the General Mills headquarters,
she got to visit those kitchens -- those test kitchens from the 50s
And she, too, thought they were cool!

But somewhere along the line, they decided they needed to be more updated
And so tore out the old and remodeled into efficient modern kitchens!

So our relationship with Betty goes back a long way
And often, for a new bride, if I'm invited to a shower, I gift a Betty Crocker Cookbook.
They're good basic books with lots of pictures.
Just the thing a new bride and perhaps novice cook needs!

I love this post! I love my Betty Crocker cookbooks and even the little brochure booklets from the 1950's and 1960's. After my mom passed away, I forgot to ask my sister to save those little booklets for me--I knew she didn't want them, but I was two states away and by the time I was able to get there, they were gone along with my mom's Wagner aluminum roasting pan! sniff sniff Thankfully, I have been able to replace some of these booklets, buying them on ebay and Etsy, but I still have a quest to find a roasting pan like my mom's! It was large and open - did not have a lid like some I see. I am perusing thrift shops, antique malls and estate sales, but so far have not come across one like that. Every Thanksgiving turkey, Christmas ham, Easter lamb and Sunday pot roast was cooked in that pan. Maybe I can find one on Ebay! Wish me luck!
Stickhorse V

Good memories in those cook books. I like your stove brand on the one's cover. My mom has the original. It opens easiest to the brownies recipe. :-)

That was a lovely story Martha and the mark from the stove ring, gives the book a talking point and history.

Martha,
Oh, dear friend, I adore hearing about your "Betty and Me" Cookbook!!!
Like you, I'm a 1969 Bride and my beloved Aunt Jeanie,
sent a Cookbook for my Wedding Shower!!!
I still use it, especially during Thanksgiving. . .for it contains
the Roasting Guide for Turkeys!!!
Mine, also has a few "stained" pages along with a few torn ones, as well!!!
We are blessed to have had great cooks within our family!!!
Even more so, that they passed that skill and l o v e onto each of us!!!
Wishing you a wonderfully filled Autumnal week ahead!!!
Fondly,
Pat

Great post! I need to add one of those to my collection so I will now be on the lookout. I have some old BHG books, including one from 1941. I also have an old Watkins book from the 1930s which was my mother's. She worked as a driver for the lady who was the Watkins peddler, and in fact that lady introduced her to my father! That food looks scrumptious, and I do remember having to use cottage cheese instead of ricotta way back when. You couldn't get "exotic" ingredients in the South in the grocery stores then.