A Dual Holiday -- Thanksgiving and Anniversary

So we chose a
"Home Alone"
Thanksgiving

But this year
It was also our 46th Anniversary 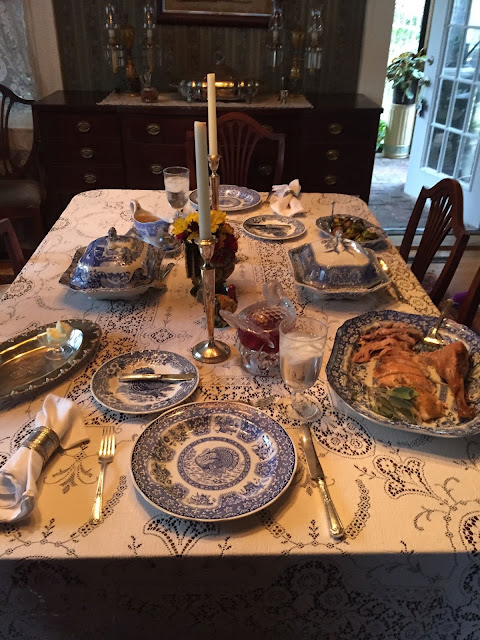 My mother's water glasses
His grandmother's cutlery
The bread tray celebrating a 25th anniversary in 1914
Napkin rings which he bought for a gift
In fact, it was two of the very first ones I got when I started collecting
Belonging to Abe and Dora
A couple's napkin rings
for an Anniversary Thanksgiving Dinner 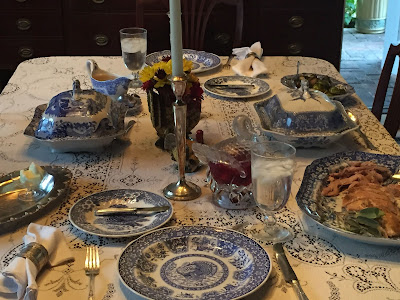 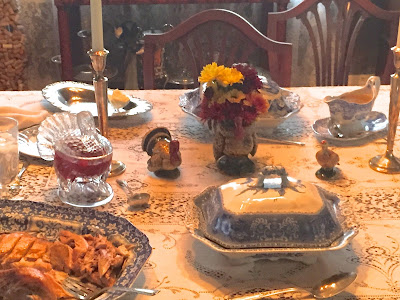 And Thanksgiving is turkey
Turkey to eat
Turkey for the cranberry sauce
Turkey salt and peppers
A big tom holding a bouquet of fall flowers
The salt and peppers and centerpiece I got the second year we were married
At a dimestore in downtown Kansas City
for less than $5!

We've had them ever since!
(And I found a second flower holder but then I like things in pairs!) 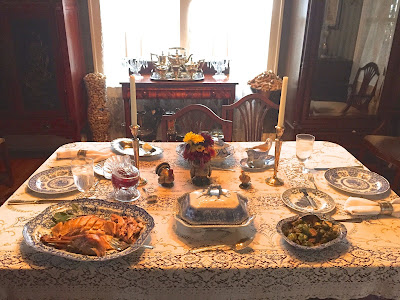 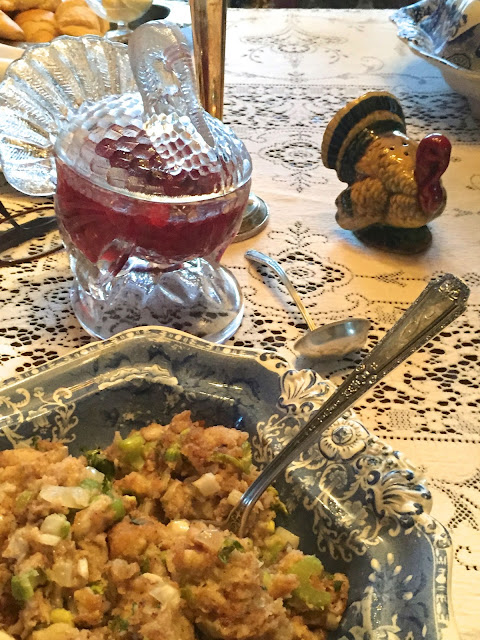 The glass turkey
(one of a pair, naturally)
holding cranberry sauce
And the wee turkey holding pepper
A casserole of dressing
(Which is what we call it whether it is inside or outside the turkey) 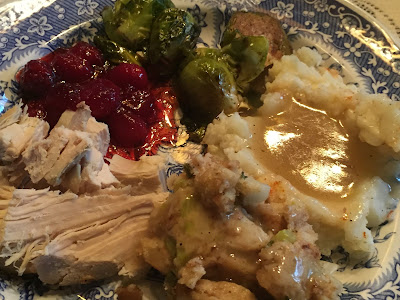 And after dinner
But not after pie
We were too full! 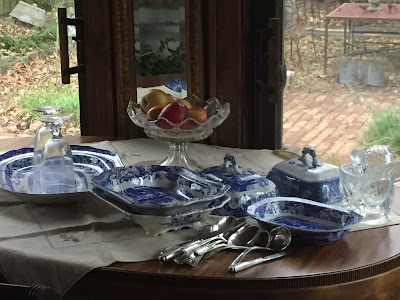 The dishes are done and stacked on the breakfast room table
That's a tradition too
For usually someone helps with the dishes
And not knowing where they go they get piled up somewhere
For the hostess to put away later.

It wouldn't seem like Thanksgiving without clean dishes on a table
ready to be put away!

Dinner tonight will also not be an anniversary dinner
It will be Thanksgiving leftovers
My favorite
A turkey sandwich and cold glass of milk!

We'll celebrate this weekend or next week!

In hindsight, I'm not sure I would have gotten married on the day before Thanksgiving
Because every few years our anniversary and Thanksgiving fall on the same day.
I am a romantic
And turkey and all the trimmings doesn't seem "romantic" enough for me!

But it is what it is
And I'm happy to be celebrating 46 with the love of my life.
Posted by Martha at 4:44 PM

Oh Congratulations on your Anniversary Martha! What a sweet Thanksgiving Dinner for two! I enjoyed hearing about all of your pieces. I really like the looks of that glass turkey with the cranberry sauce in it, very striking looking! And, I like pairs too! :)

Happy Anniversary to you both, and also Happy Thanksgiving!

Hope your hubby is recovering well. We also had a quiet Thanksgiving with just the two of us. The ice storm made us change our plans for today. Ham for us, but I pulled out all the good dishes too and I had the cranberry sauce I had made to take along today.

Happy Anniversary and Happy TGV! We got married 3 days before Christmas, and it was all so loverly. However, it creates issues when we want to travel or we have company or gift buying. I have decided it is a good idea to have a few months in between significant days! (More presents...)

I am so sorry hubby Jim is recovering from surgery, hope he is feeling Top Notch in no time!

Happy 46 years - that is remarkable, congrats and best wishes for many more happy and healthy years together!

Martha,
Congratulations to you and husband, Jim on your 46th Wedding Anniversary, dear friend!!!
Gorgeous heirloom tablescape!!!
Your Thanksgiving Menu is similar to ours!!!
Blessings !!!
Fondly,
Pat

I loved reading this, Martha, and want to wish you a Happy 46th Anniversary. My late beloved and I would've been married 46 years this coming June. Enjoy your special time together, and may your hubby continue to improve.
The curved glass china cabinet is a beauty and so deserved as an anniversary gift! What a deal it was and it will be loved in your home.
Happy advent blessings to you.