And we will be celebrating our
46th Anniversary as well

Had I given some thought 46 years ago, I'm not sure I would have gotten married
Thanksgiving week!

This afternoon, however,
after the pumpkin pie was in the oven
after the cranberry sauce was made
I had a couple of friends over for tea 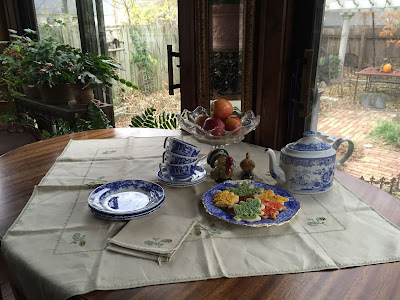 In the breakfast room
Touches of fall
the compote of fall fruits
(apples and pears)
The "new" old turkey salt and pepper
Because on Thanksgiving Eve there should always be
a turkey on the table! 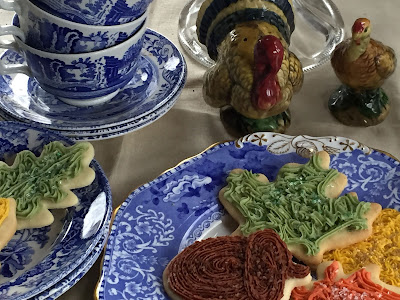 These have a story
Replacements for the ones I misplaced
that I bought in 1970
When we celebrated
our first anniversary
with a Thanksgiving Dinner!

I also bought a centerpiece turkey which matches.

The original salt and peppers somehow got misplaced over the years
But I found them this year on eBay and bought them back!

These I won't put in such a "good" place!
They'll go with their big brother centerpiece
(and the companion one I found years later for pennies --
but then I like things in pairs!)

The nosh for a Thanksgiving Eve Tea? 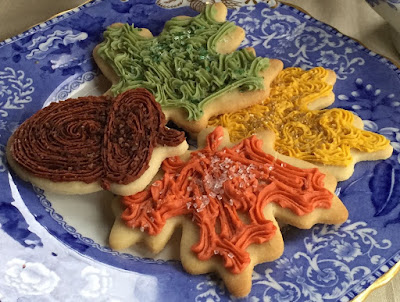 Alas, not mine
but bought from Friends Lori and Rosemary
Who make them for a fundraiser that's held at our Middle School right before Thanksgiving 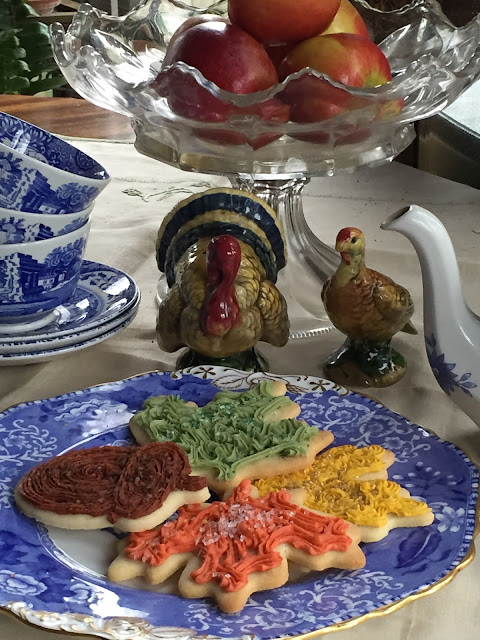 Fall turkeys, fall cookies
on my beloved blue and white
For a Thanksgiving Eve Tea
Posted by Martha at 4:43 PM

What a lovely table and transferware!

Thanks Bernideen -- it would look as good in your red!

Oh, I did not realize your hubby was ailing, but yes, glad it is over and went well. And you had time for tea! How beautiful! You know I love your blue and whites. Why is it that everything good that goes with tea is high in sugar!! We should not have it but now is the tempting season. I made a choc. chip cake today...oh,so good! Perfect for tea. After tomorrow any leftovers will be frozen for maybe a tea day in December. Until then, watch the weather and Happy Thankgiving, Martha.

Martha,
Timely reading this post tonight, dear friend!!!
Today, I spent the better part of 30 minutes looking for that "good place"
and finally gave up and made "new" bows!!!
Lovely tablescape and those cookies are splendid!!!
Giving thanks for your friendship through the years!!!
Fondly,
Pat