Now, I'm not sure why a teacher brought a cake to school,
but they did
And Jim loved it so much that he asked for the recipe

And he declared that his favorite cake!

Two ounces, the recipe said, two ounces of red food coloring
I was sure that must be wrong
(In her fourteen year old wisdom she had wrote ounces instead of drops)
for I had only bought food coloring in the multipacks
For tinting cake frosting and make Easter egg dye

Then I put in all of that small bottle
Still pink!

That first cake
was not
red velvet
but
pink velvet!

But it tasted good

And when we next saw Sister (and Mom) we asked about it
Yep, Mom said, you had to buy a whole bottle of red food coloring
And that bottle was two ounces!

I bought the bottle, made another cake
And Husband Jim realized one of the reasons he married me
I can cook!

From that very first "pink" velvet cake
To the latest "red" velvet one
We've always made on for Jim's birthday
It's a tradition!
(As much so as the Halloween Chili or Sarah's birthday lasagna!) 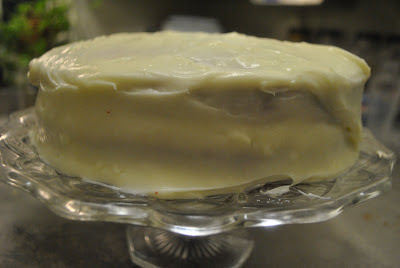 The cake in all it's pre candle glory! 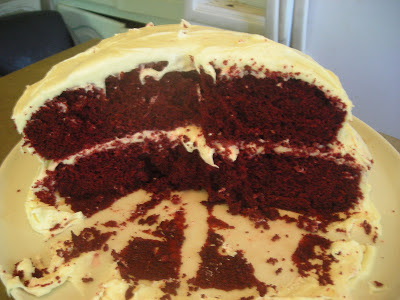 Love the layers of red and white! 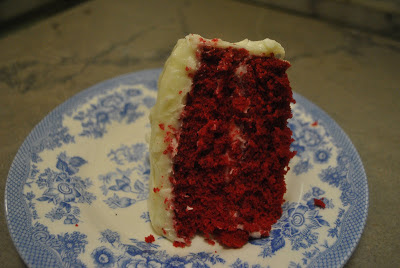 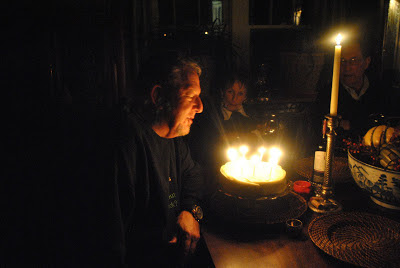 And ablaze with candles
For the birthday boy!

What was an obscure little cake recipe for so many years
Has all of a sudden become a very popular cake
Often seen on restaurant menus!

The cake has gotten so popular that they now make a cake mix version
And different colors, even, besides red
(I think I saw a box of blue velvet the last time I went to the super market)

In the bowl of a mixer, cream together the shortening, eggs and sugar. In a separate small bowl, mix together the cocoa and food coloring. Add the paste to the shortening mixture. Sift the flour and salt together. Add to the batter alternately with the buttermilk in 3 additions. Add the vanilla extract. Fold in the baking soda and vinegar. Pour the batter into 2 greased 9 inch cake pans. Bake for 30 minutes or until a cake tester comes out clean. Let cool on a cooling rack.
CREAM CHEESE FROSTING:

In the bowl of an electric mixer fitted with the paddle attachment, on low speed, cream together the cream cheese, butter, vanilla and almond extracts. Add the powdered sugar and mix until smooth.

Yes, it takes a lot of food coloring, but oh so yummy!

Lucky Jim! And Lucky and talented you! I've never made this cake, but perhaps I will try now!