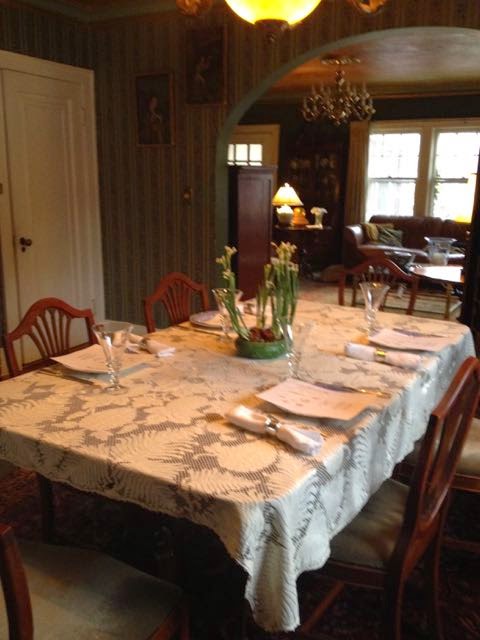 2015 marked the 15th year that the Lunch Bunch joined me for our monthly lunch.
In January, it was my annual paper white luncheon.
We've had lots of good food, tried hundreds of new recipes
And we can't imagine a month without our third Tuesday get togethers! 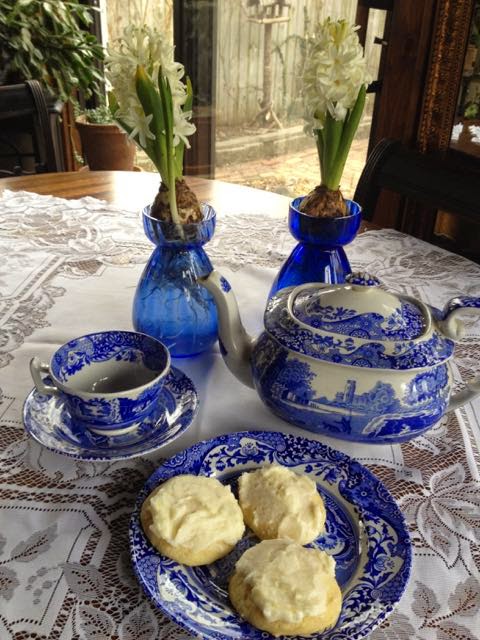 Afternoon tea is usually taken in the breakfast room.
With the blue and white (most often Spode)
A friend suggested the receipt for Nordstrom's lemon ricotta cookies
And they were superb.
Now I wonder why I haven't made them again! 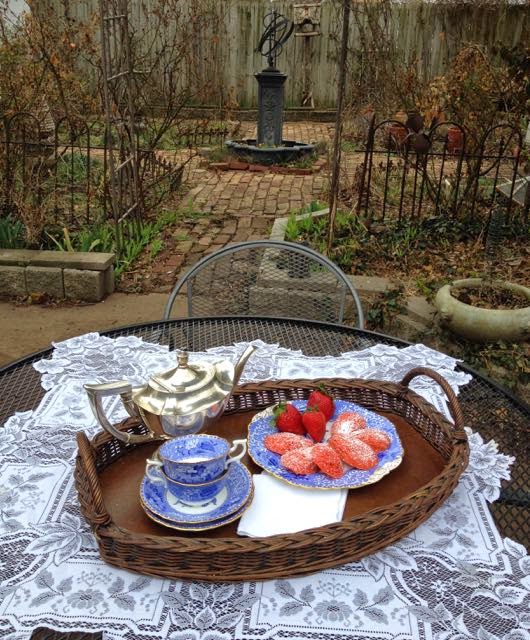 In 2013, we had snow in March
In 2014, we're taking tea in the garden!
Prairie weather is so fickle!
Strawberry madeleines were perfect for a garden tea! 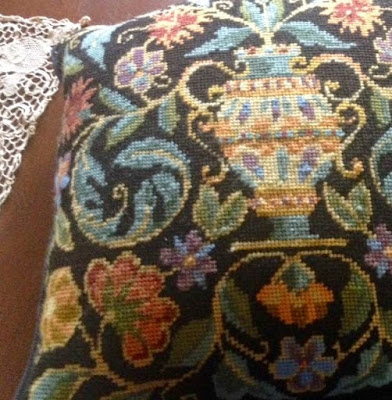 My needlework of choice is needlepoint and it is always a red letter day when I finish a canvas.
It's more of a red letter day when Mary calls and says that my pillow is ready!
This canvas, a Christmas gift from Husband Jim
A definitely thoughtful gift!
(and he found out how expensive my hobby really is!) 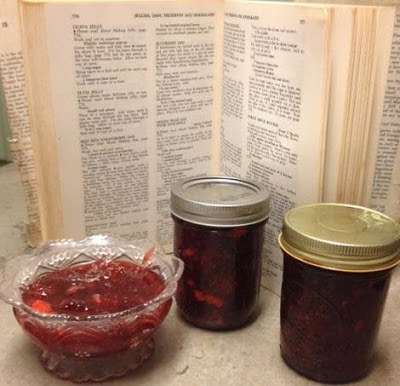 I don't put up food to take us through the winter as my great grandmother did,
but I do like to put tastes of summer in jars for winter use.
Because it is just better!
Strawberry jam seems to be the start of the canning season.
Fresh and local strawberries.
Make the best jam! 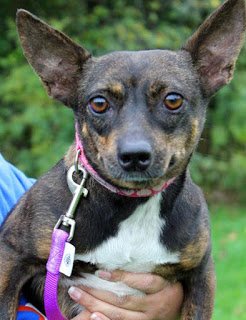 Daisy Dawg came to join our family this summer.
She's still a bit shy but she's warming up to us
(and spends less time hiding in corners when we have company)
She's a sweet dog, she and Doogie are pals
And she, like Doogie and Dolly before her is a rescue! 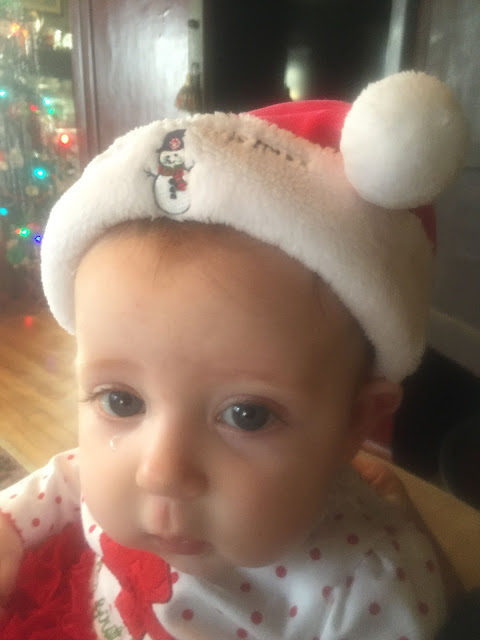 Piper Elizabeth managed to enter this world in July
Another grand girl to love and spoil
A girl of giggles and smiles.
A happy baby! 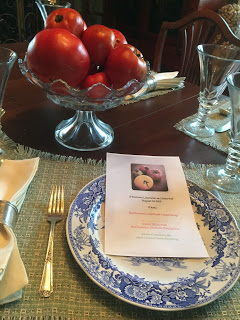 Four other Master Gardeners and I did trials of tomato plants for K State Research.
It was fun and I learned a lot.
To celebrate, I invited the "Tomato Girls" to lunch
A lunch of all tomato foods from soup to dessert!
It was fun and you really didn't feel as if you had just eaten three courses of tomatoes.
The tastes were so different! 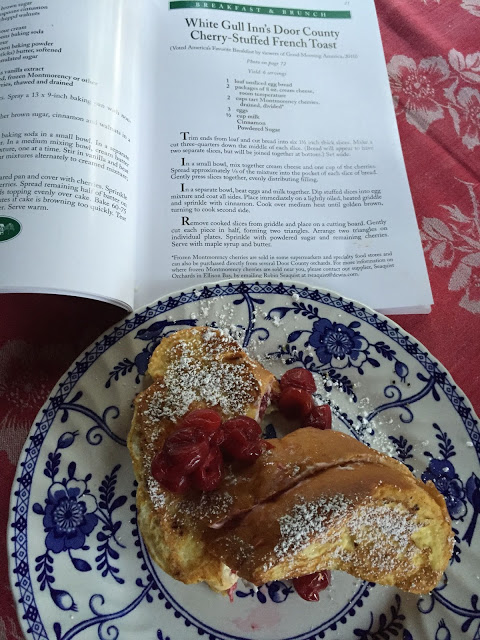 We went to Door County in Wisconsin for a week
I came home with a cookbook and served this wonderful French toast for breakfast one morning. 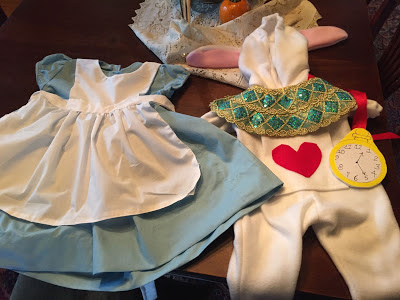 Daughter Sarah asked me to make Lucy a Halloween costume again --
Alice in Wonderland
Piper, she said, could wear the black cat that Lucy had worn
But Nana had other ideas and a White Rabbit costume was mailed to Minnesota
in time for Halloween.
Sarah was pleased and surprised! 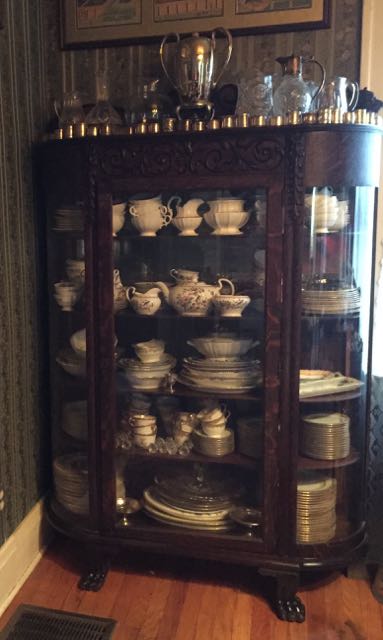 Our 46th Anniversary was on Thanksgiving
The day after, this lovely piece came home
My anniversary present! 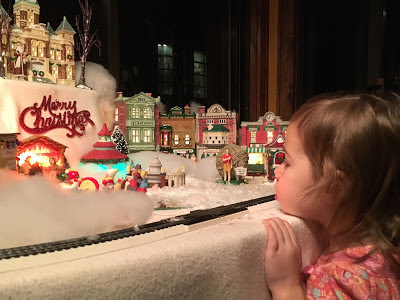 Christmas at Linderhof
isn't complete without the Magical City of Scott
Lucy is mesmerized.
She loved to pick up the "snow" and make it snow and move the trolley and cars along the roads.
We let her,
We are grandparents, after all!
Daughter Sarah would never had been allowed to do that!

What a lovely review Martha and I do remember them all. Loved the china cabinet, Lucy and the Scott Village, loved the doggie, bulbs coming up in the March photo and on and on!

Wishing you a very happy, healthy and prosperous New Year. Thank you for sharing your beautiful home, family and yummy recipes.

Thank you for sharing your Year in Review. Wishing you a Happy New Year 2016.

Martha,
I did so enjoy my "look into the past year's events" at Linderhof, dear friend!!!
Thank you for a Year in Review!!!
Happy New Year!!!
May all your hopes for 2016 come to be!!!
Fondly,
Pat

It was lovely to join your group of readers this year and I've enjoyed each post!
Ginene