At
My very favorite tea room in
all of the Kansas City area
(And I've had tea at a lot of places in the city!) 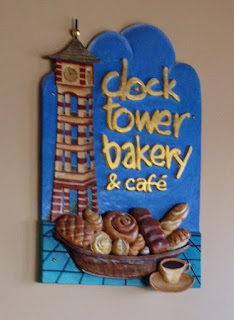 It's not a tea room but a bakery . . . and cafe
But it serves the best, the absolute best
English Afternoon Tea
(perhaps the reason is that the owner is British!) 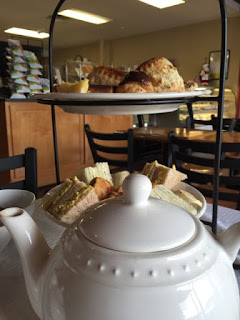 A pot of tea, and a curate full of food 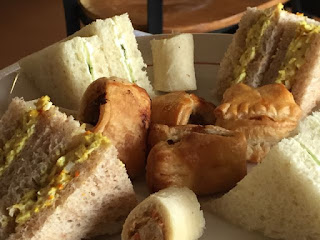 The savories -- sandwiches
cucumber (of course) and curried chicken
real British sausage rolls
And a little rolled vegetable sandwich that is my favorite
(Perhaps Jill would share the recipe?) 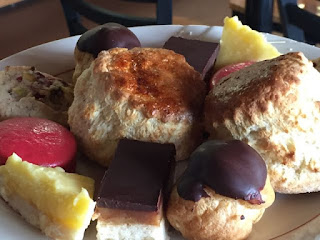 And the scones and sweets 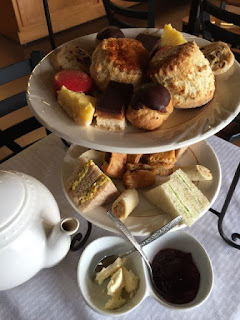 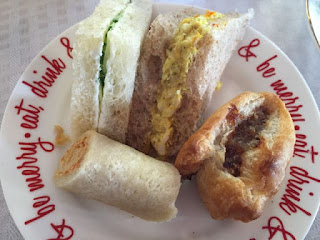 A plate of sandwiches
(we got two of each) 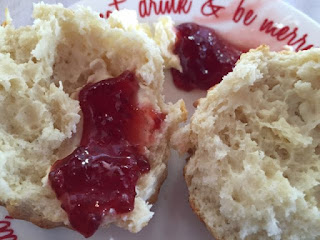 And a scone with real Devonshire cream and strawberry jam
(no "faux" cream here but the real deal!)
And the scone is a real British one
Round and light and fluffy
Not triangle and dried and full of strange dried fruit

Clock Tower Bakery does a real Afternoon Tea
just like many places that we took tea at
when we lived in England.

If I lived in the city, I would go there for afternoon tea
at least once a month
And they also do a cream tea --
scones with cream and jam and a pot of tea --
That I would do weekly!

Sigh, sometimes there is a downside to living in Fort Scott! 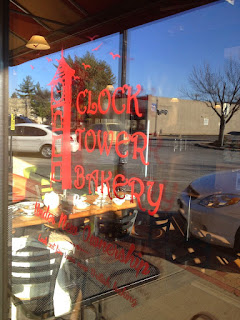 Clock Tower Bakery
Downtown Overland Park, Kansas
It is the place to go for tea in the city!


It's Tuesday and I'm sharing my birthday tea with Sandi at Rose Chintz Cottage.
Posted by Martha at 6:34 PM

Looks like a great place Martha! Sending happy birthday greetings to you this month. :)
Gina

Hi Martha, great to meet you at Clock Tower Bakery. What fun to read your blog. Hope to see you again and don't forgot the Downton Abbey afternoon tea event on 14th February. All the best, Ian

Hi Martha, great to meet you at Clock Tower Bakery. What fun to read your blog. Hope to see you again and don't forgot the Downton Abbey afternoon tea event on 14th February. All the best, Ian

Martha, this sounds just lovely! Your British host would certainly know her way around a real English Tea and aren't you fortunate to live near the place! The food looks wonderful and what a delightful way to celebrate your birthdays.Thanks for sharing with us and enjoy your day.

Martha,
I'll definitely "look" for this Bakery (Tea Shoppe) next trip to KC!!!
Thanks for sharing!!!
Fondly,
Pat

Hi Martha,
Your post has been featured at No Place Like Home today. A very Merry Christmas to you and your family!