Yet, I admire needlepoint chair seats

In the 40s, 50s and 60s, needlepoint was popular
as a way to make chair seats for the dining room chairs

But over the years, we have garnered quite a collection
of needlepoint chairs at Linderhof 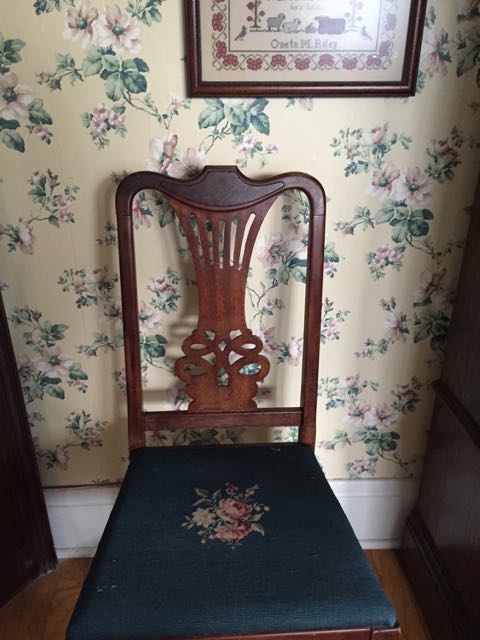 The first one
Bought when we were very very poor
To go with the mahogany secretary in the living room
(It has the same feet)
At an auction.
I had my limit
And I had someone bidding against me
Each time it was my turn to raise the bid, I did confidently
(Like I had all the money in the world and I would own that chair "no matter what")
At my top bid, I nodded like I had no intention of stopping.
A she did!
She stopped!
I had the chair
And it's a favorite
Currently, it resides in the guest room
And I use it as my sewing chair.

Besides the feet, I was smitten by the needlepoint seat! 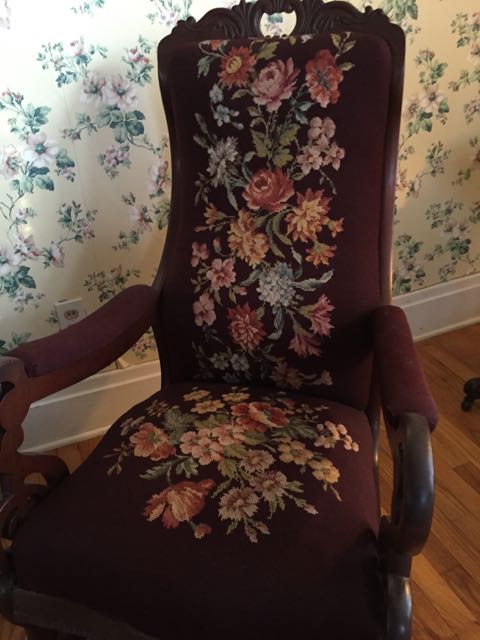 An old rocking chair
I was in my favorite shop, Iron Star, in our little town
And there it was!
A great rocker and needlepointed to boot!
We had just gotten our second grand and I wanted some place to rock her

I didn't buy it when I first saw it
For it was a little on the pricey side . .
But I was back there the next day when the store opened
For I didn't want anyone else to buy my chair!

It also came with a story which was on the price tag:
"The family moved here from Kentucky bringing the rocker with them
in the covered wagon which they used to make the trip."

But I don't know "when" that was
However, the rocker itself dates from the Civil War era
So it is old 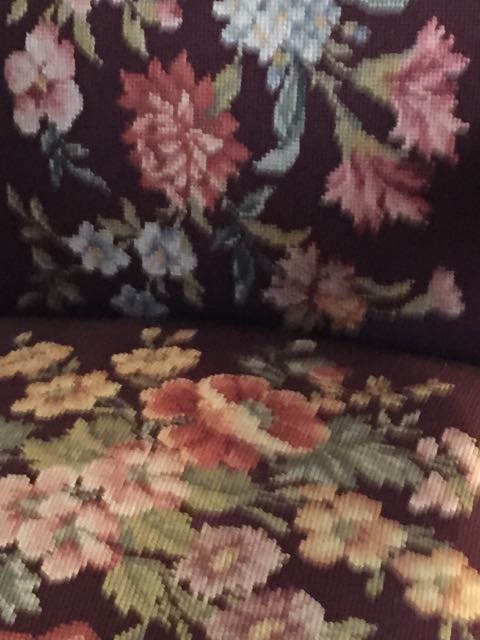 I also learned that the needlepoint was done and added in the 50s
It is very fine needlepoint indeed and it was stitched by a skilled needlepointer.

It, too, resides in the guest room
To rock Piper (and Lucy if she so desires) at bedtime 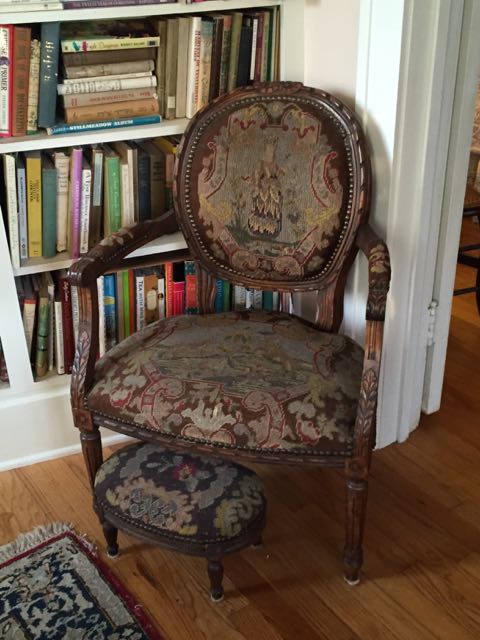 I saw this piece in a consignment shop in Kansas City
"for a steal"
And again, I left it and then panicked -- just know that there were hordes of people
just waiting to snatch it up.
I called to reserve it (even willing to give a credit card number)
But alas, they did not do that.

What did we do?
Jump in the car, of course, and drive to Kansas City
to get the chair.
They called it "French"
But on the underside it says,
"Made in Belgium"
I found some examples on line
And it dates to the turn of the century
And the needlepoint is original to the piece
And the footstool matches!
A true treasure indeed!

It looks cozy in a corner of the sunroom.
It could be used for a seat
But I'm thinking that it rarely ever was
Which is why the over 100 year old needlepoint is in great shape! 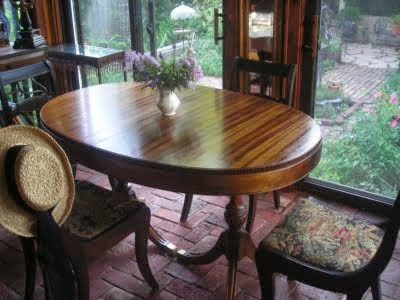 I liked it but I dreamed of needlepoint!

So I would troll eBay and Etsy
Looking for just the perfect needlepoint to cover those chair seats
And four chair seats are hard to find --
sometimes you find singles, rarely you find doubles
hardly ever do you find four! 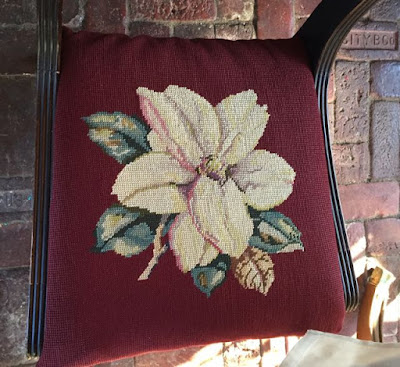 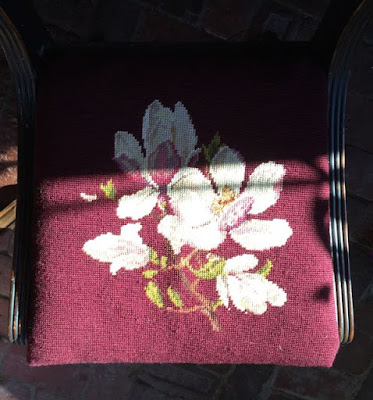 I found two more magnolias
Which seemed to be the same background as the first
Similar but different
(And that I like)
So I "bought those now"! 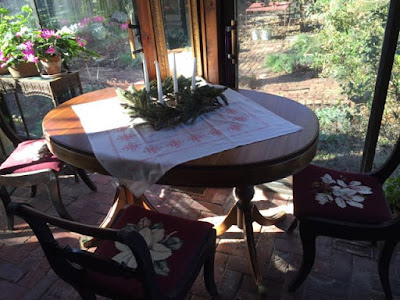 Because of the way the breakfast room is arranged,
three chairs work better than four
But, of course, I have a fourth

Which is my "desk chair" in the living room

Alas, there was no burgundy background magnolia for that chair 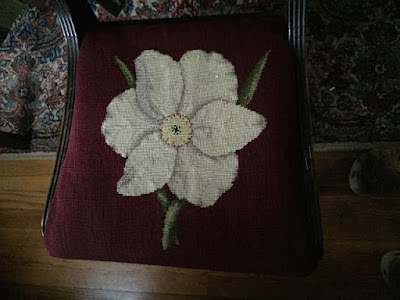 If I use all four in the breakfast room, I don't think it will be really that noticeable that one
of the flowers is not a magnolia!

And it works in the living room
At the desk!

Wow Martha, what a wonderful collection of needlepoint chairs you have! I really like the one made in Belgium, very pretty. And the Civil War era rocker, such a beauty!

Martha,
You have a lovely collection of needlepoint chairs and rocker, dear friend!!!
I l o v e the way you've added needlepoint to all four chairs around the breakfast room table!!!
Thanks for sharing your collection with us!!!
Fondly,
Pat