There are no leftover salads
I'm good at judging the quantity needed
And if I have just a tad left in the bowl, I just divide it amongst the plates before I serve.

And we had no leftover moussaka --
A couple of our guests had seconds.

The wee bit of leftover apple crisp
Was devoured by Husband Jim as a bedtime snack! 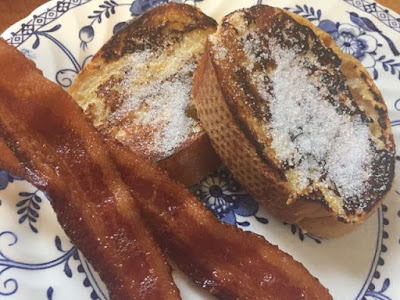 But French toast is really pain perdue
Which is "Lost Bread" in French
Fitting for the breakfast the morning after
And it used up all the bread that we didn't eat at the party!

Leftover egg whites can be a problem
I sometimes make meringues with them
(if there are enough)
Mostly, I throw them in with whole eggs for a morning scramble

As I was perusing a cookbook the morning after,
Natalie Dupree's New Southern Cooking
(a 50 center thrift store find -- I have one of hers and really like it so thought I would risk 50 cents on another and it did not disappoint)
There was a recipe for Butter Brickle Madeleines
which called for 3 egg whites -- only three egg whites -- no yolks!

I made them yesterday afternoon 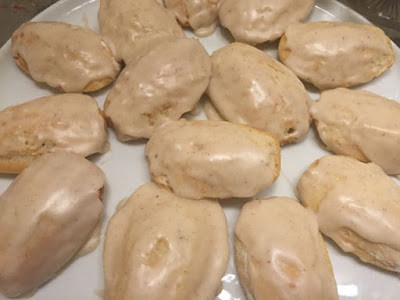 They're frosted
And I've never frosted a madeleine
But they are good -- very good
And I love the egg white cake -- it's so light! 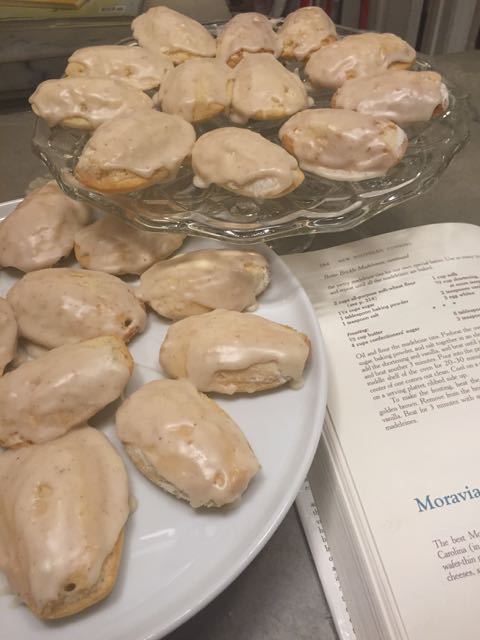 This will definitely be one of my "go to" recipes whenever I have three leftover egg whites!
They are that good!

NATALIE DUPREE BUTTER BRICKLE MADELEINES
2 cups flour
1 1/4 c. sugar
1 T. baking powder
1 t. salt
1 c. milk
1/2 c. butter at room temperature
2 t. vanilla
3 egg whites
Oil and flour the madeleine tins. Preheat oven to 350 Mix flour, sugar, baking powder and salt in the bowl of an electric mixer. Pour in the milk, add the shortening and vanilla and beat until just blended. Add the egg whites and beat another 3 minutes. Pour into the prepared madeleine pans and bake on the middle shelf for 20 to 30 minutes or until a toothpick inserted in the middle of one comes out clean. Cool on a rack and then remove from the tins. Place on a serving platter, ribbed side up.
FROSTING:
1/2 c. butter
4 c. powdered sugar
8 T milk, heated
3 t. vanilla
Heat the butter in a heavy saucepan until it is golden brown. Remove from the heat and add the powdered sugar, milk and vanilla. Beat for 3 minutes with an electric mixer until cool, then spread on the madeleines.
NOTES: I got 34 madeleines from the recipe. I also made only HALF the frosting recipe and had enough to frost all of my madeleines. I think I would have had a lot left over had I made the whole batch.
Posted by Martha at 10:29 AM

You are the second blogger in the space of a few days to post about Madeleines. I will take it as a sign, and pull out my Madeleine pan!

Hmmm ... I've never frosted a madeleine either but I'm sure willing to give it a try. Yum! (Your *leftovers* sound delicious.)