It's just the second day of 2016
And company is expected at Linderhof!

My brother from the city and a friend are coming for the day!
I'm excited for my brother is favorite company! 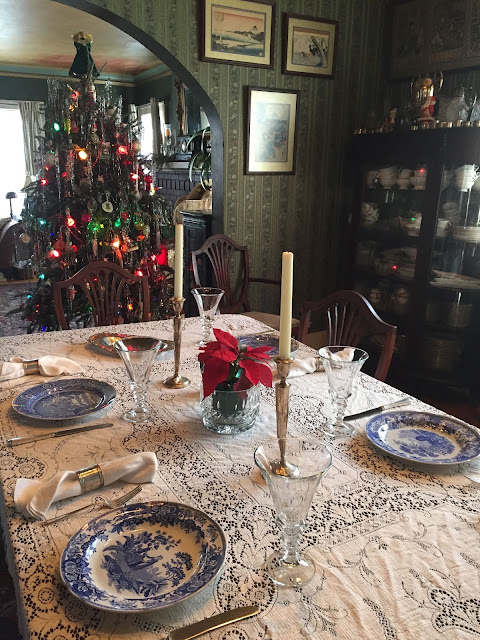 The tree is still up,
A poinsettia is still on the dining room table
It is, after all, the 9th day of Christmas!

A lace tablecloth,
the Spode blue and white,
damask napkins in silver rings 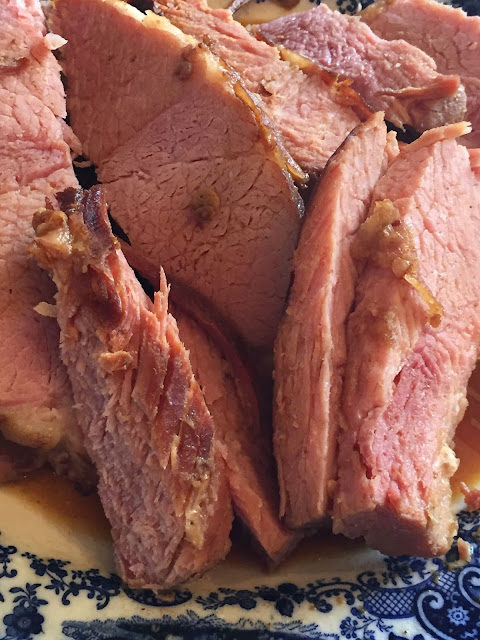 Ham
We decided to save our ham for company
(so we had steak)
rather than having it two days in a row!
A butt portion (bought for the two of us)
which was plenty for four
Baked in the oven with a glaze of orange juice, brown sugar, mustard, molasses and cloves
(and a touch of bourbon!) 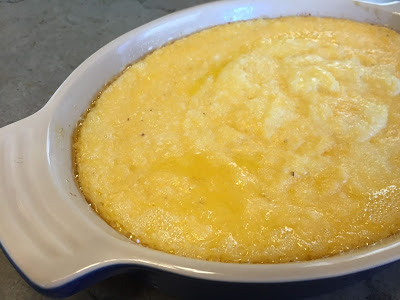 Cheesy Grits
A recipe from Daughter Sarah that she found ages ago.
Non grits eating people ask for seconds.
It's creamy and cheesy
Perfect to accompany a baked ham!
And they are so easy -- heat 3/4 stick butter, 3 cups of milk and a good pinch of salt in a saucepan.   When it comes just to the boil add 3/4 cup quick cooking grits.    Stir constantly until it thickens.    Add cheese (the original recipe calls for gruyere but we use whatever you have)    The original recipe calls for 4 ounces, I just put in what I like . . . and a dash or two of Tabasco.    Pour into a buttered casserole.
Bake in a 350 oven for 15 to 30 minutes (until it's set)    If you want a brown crust you can run it under the broiler. 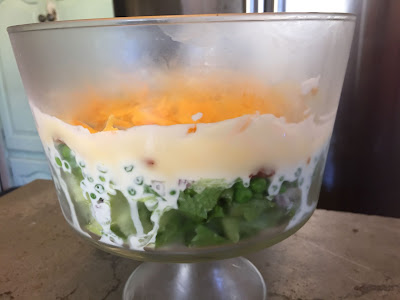 Six Layer Salad
Lettuce, diced red onion, peas and diced cooked bacon are topped with a mayonnaise and sugar mixture which is spread over the top.     Then it's topped with cheese.
Two spoons to dig in and every morsel of lettuce gets "dressed" by the topping.
It's an old recipe (50s or perhaps 60s) but it's a good recipe.
It looks pretty, too, in my trifle bowl 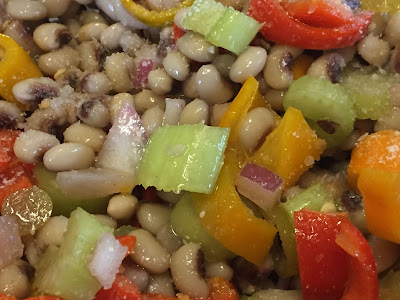 France's Marinated Black Eyed Peas
I first tasted this salad at Friend Francie's New Year's Open House in Springfield.
I begged (pleaded) for the recipe and she shared!
It's lovely and simple -- black eyed peas, celery, red pepper, yellow pepper, onion (I used red) all dressed in a mixture of equal amounts of red wine vinegar and oil.
(I used frozen peas that I cooked myself -- but you can also make it with canned ones
which makes it a super easy salad)

And it's not just for New Year's!
It would be good anytime! 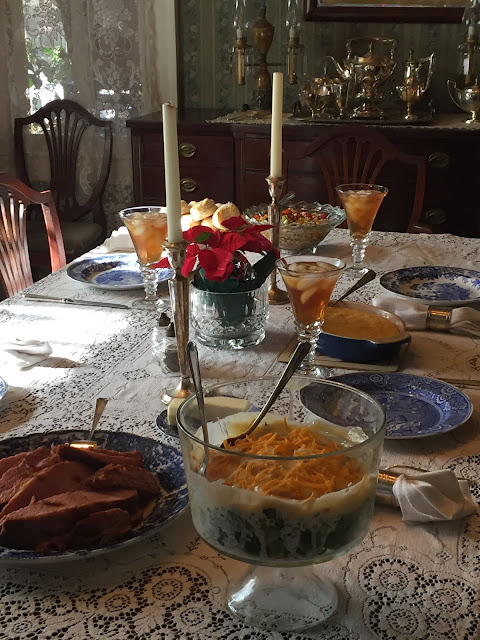 We served family style!
Dishes passed and then passed again as everyone got seconds! 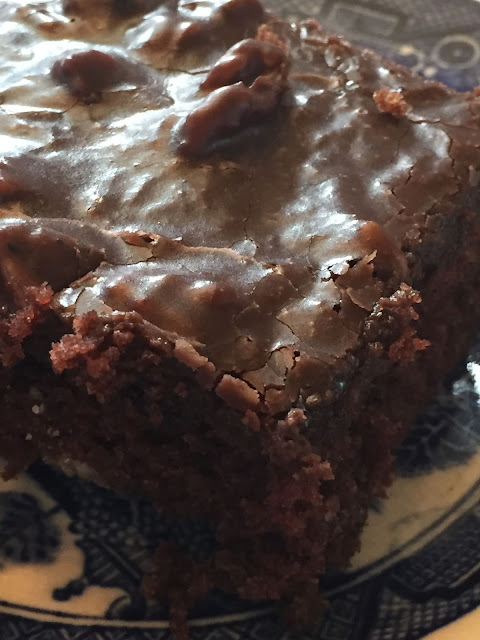 Chocolate Sheet Cake
Yes, that cake.    Simple but still really good.   Chocolate with nuts in the frosting.
My recipe is so old that it calls for half butter and half oleo
I use all butter!
It's the buttermilk version (and yes, I prefer real buttermilk to the vinegar in plain milk)
I sent a plateful home with my brother
(He doesn't bake much!)

We had a great time.    They brought their dogs with them.    Because of wagging tails the big guys were kept outside (since the Christmas tree and breakable ornaments were tail high on the tree) but their little guy Louie came in.    Doogie and Daisy thought he was great fun and the three of them had fun playing!

All too soon they were gone.    Gone to visit our National Cemetery with the Wreath Across America wreaths in place and then to our Fort for a tour.

What a lovely meal and table is set so wonderful. All the dishes look delightful!

Your feast looks so delicious!

Isn't it so wonderful to gathering loved ones together like that?

I am so happy you enjoyed yourselves.

My older sister arranged to be involved with my father getting a wreath the last few years - always too snowy or busy this time of year to travel up there to see the festivities - glad she represents him so well. Wreaths Across America is such a neat thing.

Happy New Year Martha! Your brother is a lucky guy, what a great menu you prepared. And thanks for the recipes! Your house always looks so cozy and welcoming!

Hi Martha, Your table looks lovely and your meal, delightful! I like my grits straight up with milk and sugar; I've not eaten them "savory." Looks good though. We used to make a "7 layer salad;" I'm not sure what the 7th layer is - I'll have to go to my recipe book. I do recall it being good though.
Martha, I hope 2016 is filled with God's blessings for you and your family.
Hugs, Beth

Martha your blogs always are very comforting, this one is especially so. Happy new year

Martha,
I love how you love to entertain, dear friend!!!
Your table was lovely and the menu was divinely delicious!!!
May all your hopes for 2016 come true!!!
Fondly,
Pat