I love January . . .
for whatever your do, it's always the first
Friday night we hosted the first dinner party of 2016 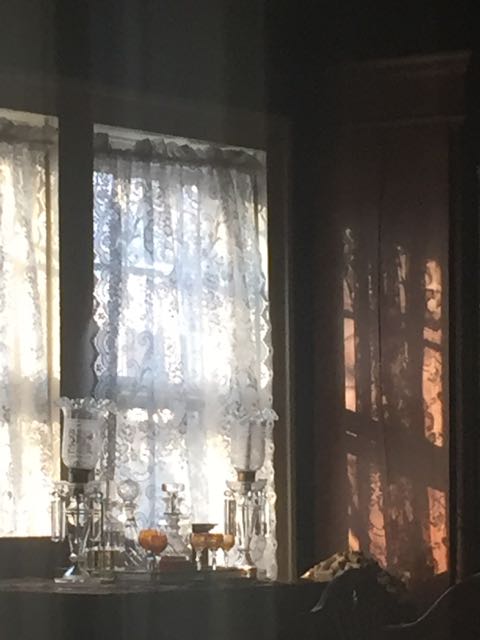 The sun was finally shinning
And as it came in our south dining room windows
And I loved the shadows of the lace on the armoire! 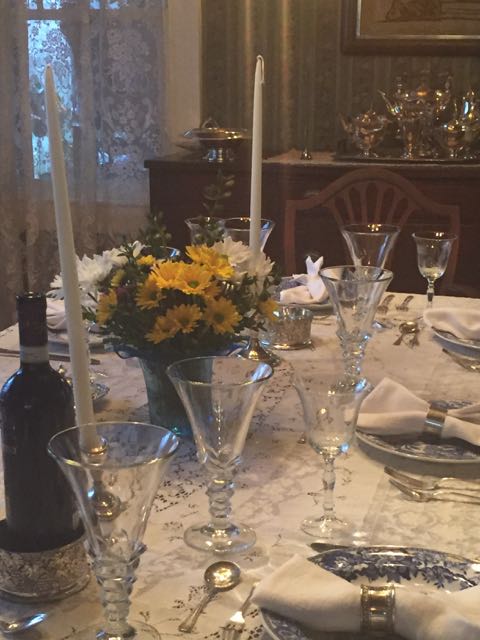 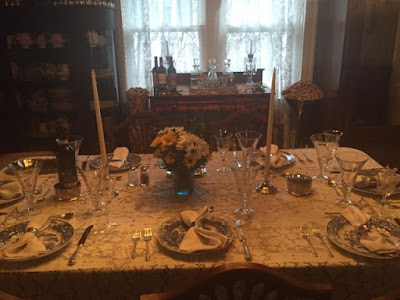 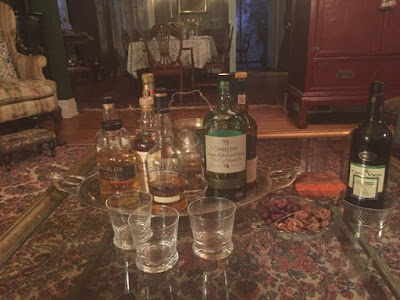 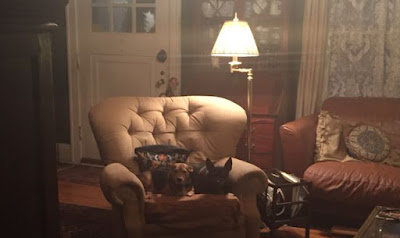 The dogs hunkered down
Awaiting company And I always love the house just before guests arrive
there is just an anticipation that a room seems to have when you're expecting company!

Drinks and appetizers are always in the parlor 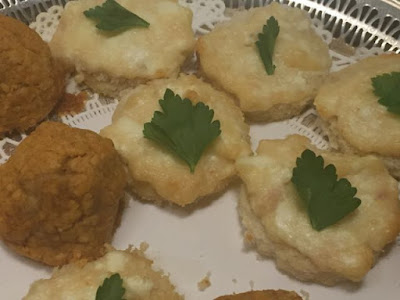 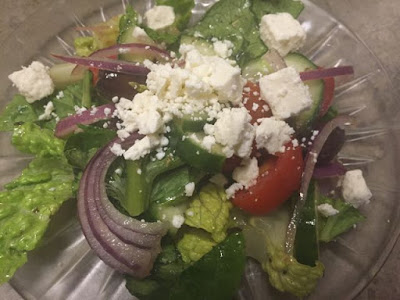 A Greek salad for a first course
What makes it Greek?
Why the addition of oregano and feta cheese! 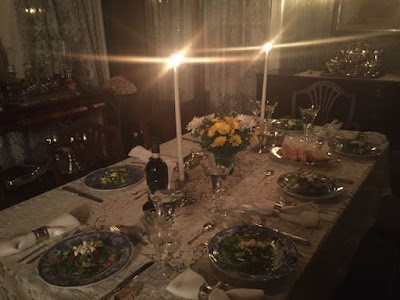 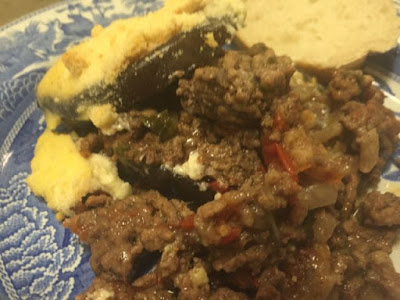 The main course was Moussaka
A favorite for dinner parties for almost our entire marriage!
Jim had been to Greece, ate lots of moussaka and hoped I could replicate it after we married
I could and did
And it became the "exotic" entree whenever we had a dinner party 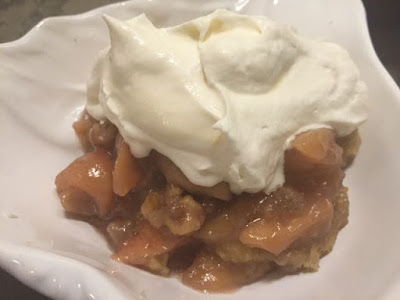 One of the guests favors crisps and crumbles
So I did an apple one
From a New York cookbook
(where this guest is from -- New York.   Albany, actually)
It has calvados soaked cherries in with the apples and no cinnamon or nutmeg
It's a refreshing crisp
Topped with a honey lemon cream
Which was perfect with the boozy apples and cherries 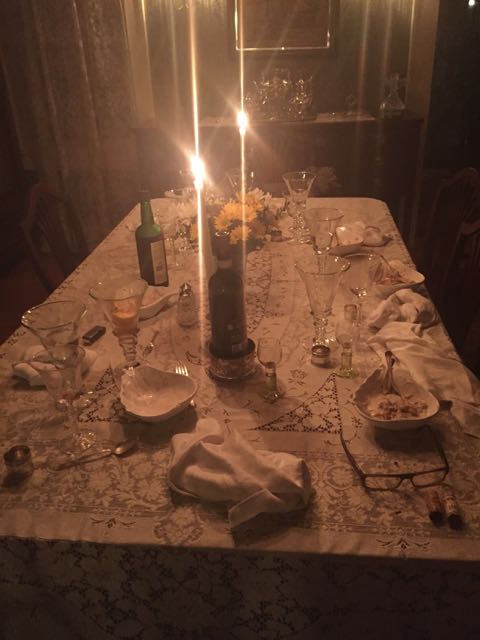 I love the table after everyone has gone
It proves that a good time was had by all!

And before I can go to bed,
all the dishes are cleared and hand washing is done
the dishwasher is loaded and turned on
And the tablecloth and napkins are put in the washer
(And those bottles of Scotch are put away!) 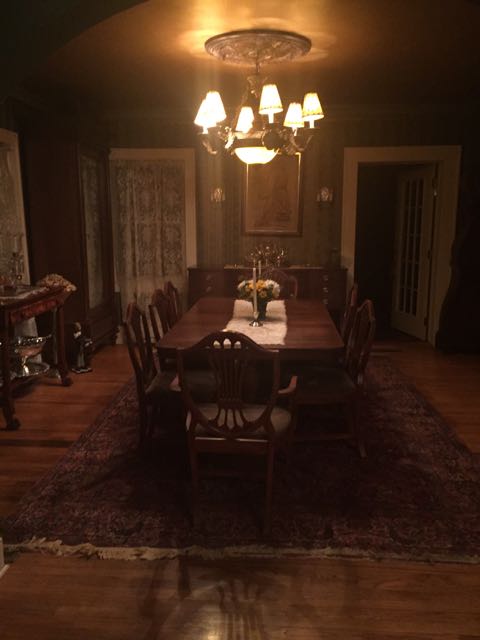 So when I come downstairs in the morning
It looks normal!

Jim and I love to host dinner parties and Linderhof has seen a fair share.
My ideal party is 6 but last night we had 7
I do eight on occasion but I think the conversation flows better when there are six

We prefer a diverse guest list too
The dinner conversation is much more lively
If we don't all work at the same place or go to the same church or even are the same political party!

I love this post! I am so happy you actually got pics of your food - I always always always forget to do that - and that's have the fun!

I love Greek food - my best friend in college was from Greece and I learned much. I would love your recipe for Moussaka! Did you ever see the comedy My Big Fat Greek Wedding? Remember poor Toula getting teased when she was little by the "homogenized" blue-eyed blonde girl calling it Moose Kaka? Well guess what - we went to the movies yesterday and saw a trailor for a SEQUEL to MBFGW!!!!! Where Toula and Ian's daughter is a teen! Everyone is in it - looks fabulous! It was as though we were seeing good ole friends!

Anyway, you set a most beautiful tablescape - and captured your dinner party marvelously.
Well done!

Lovely, Martha.
Like you, I enjoy the after-the-party time nearly as much as the during-the-party. We chat as we wash up and put the living and dining rooms to right - and then when we get up in the morning there is just a serene and tidy downstairs waiting for us.

Your table looks elegant and beautiful, Martha! I enjoyed seeing your parlor too. How pretty it is! Glad you had a good time and thanks for sharing with us. :)
Beth

Looks wonderful and sounds fun. Thanks as always for sharing.

Martha,
Such a lovely tablesetting, dear friend!!!
Blue and white are a Timeless Classic that I love!!!
The menu sounds divinely delicious!!!
Another 2016 first for Linderhof!!
Well done!!!
Fondly,
Pat

Beautiful decor and delicious food and diverse guests ... sounds like you have created the perfect recipe for a successful dinner party!