Probably the second week I was married
I decided that I wanted a silver punch bowl
for my 25th Anniversary
And I never wavered!

And we were hosting a party that evening
So we could put it to immediate use!

I can't believe that it was so long ago
That I was gifted with the punch bowl.

It is pretty
But there is a downside . . .
Polishing
For some reason the bowl and tray don't seem so difficult
It's those little punch cups
All 19 of them!

Those seem to be a pain!

I had the cups stored in the punch bowl
(you don't seem to see the tarnish quite so much)
And decided that today was THE day! 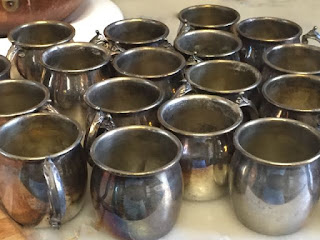 Years ago, I bought an aluminum plate and some "magic" crystals.
You put the plate in the bottom of something non-reactive (like enamel), add the magic crystals and hot water and your silver goes from black to silver!

A few years later, a church friend who happened to be a House Mother for a sorority at KU was telling me that they cleaned all of the silver in a sink lined with aluminum foil and instead of magic crystals they used Arm and Hammer Washing Soda
Everything ncluding their big silver punch bowl was cleaned that way
And you know sororities have lots of silver.

Once my "magic crystals" were gone, the aluminum plate disappeared
But then I tried the foil trick with the washing soda! 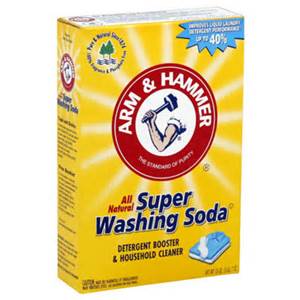 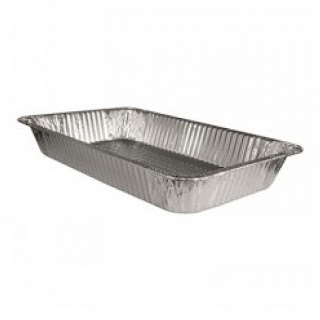 An aluminum steam table pan!
(which I always have a supply of in the basement!)

My life was changed forever!

So the pan and soda were brought up from the basement,
the water heated
And unlike Cass, I put the soda in the water and then put the silver in
Just make sure that the silver touches the aluminum 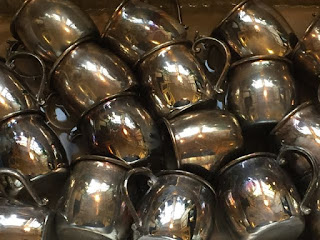 You can see here that some of the silver is losing it's tarnish
right before your eyes! 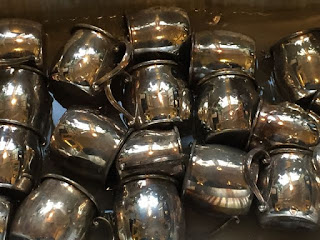 And after, all bright and shiny!

You rinse well and then dry . . 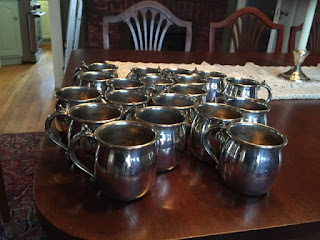 And you have 19 perfectly shiny punch cups 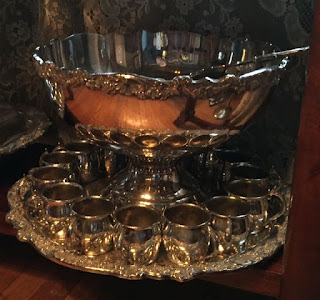 To place around the silver punch bowl
(which was polished the old fashioned way -- with cloth and a polish!) 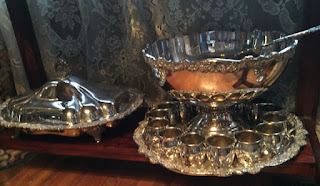 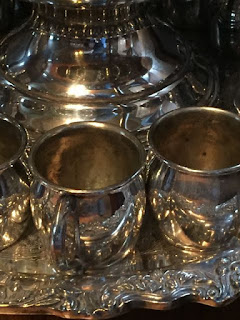 The punch cups are quite shiny
And on this dreary day, the dining room is a sparkle!

There is a downside to polishing silver this way . . .
It turns quicker for polishes usually have an anti-tarnishing agent in them
But no black fingers and it is kinder on the silver
For polishes do take off a wee layer of silver whenever you polish!

I use this method mostly for the punch cups and the napkin rings
And sometimes for the silver if (heaven forbid) I'm having company and
I forgot
to polish the silver!

It's Tuesday and I'm joining Sandi at Rose Chintz Cottage and Marty at A Stroll Thru Life
Posted by Martha at 12:08 PM

Martha, your silver punch bowl, tray, and cups are simply beautiful! They look so pretty all polished.

How fun to have silver punch cups and they are shiny! Glad you found this method that works for you...

Dear Martha:
Wow, doesn't that look so lovely. I know you can even see a reflection in it. I am so glad you shared your post and inspired us all Martha!

Martha,
My MoMa did silver polishing this way when she had to polish the silver!!!
She was a beautician and the silver polish was harsh to her already damaged skin!!!
However, she made sure that when my Sister and I polished the silver. . .
we used the polish cream and washed and dried every piece!!!
I never minded!!! To this day, I enjoy polishing silver!!!
I love seeing the transformation!!!
Your punch bowl is absolutely breathtakingly beautiful!!!
Great Anniversary gift. . .great price!!!
Fondly,
Pat

Hi Martha, you have talked me into trying it! I can't ever get my ornate pieces clean in all of those hard to clean little places and am tired of it!
Your punch bowl and cups are quite a treasure for a very special occasion!
Thanks for sharing and have a wonderful week,
Gina

Beautiful set !!! I have a trick my mother used ! After you are done using your pieces of silver,wrap them in Saran Wrap tight to keep them from tarnishing!

You were a wise bride, Martha, to have set your sights on a silver punch bowl. The most I managed was a silver ladle!!
I polished silver on Saturday. It was a good day for it, and everything now sparkles in whatever sun comes through the windows.

Martha, your silver punch bowl and cups are gorgeous! What a fabulous anniversary gift! I have been cleaning my silver this way for a while but I did also notice that it turned quicker than if I had used polish. It is much easier to use the aluminum foil and soda and it is not as messy. So glad you shared because there are ladies out there who perhaps didn't know about this little cleaning trick. Enjoy your day and thanks for sharing.

Hey Martha! Well done! We had a dinner party weekend before last, and I used the sterling flatware ... realizing that I should have done this to it before the guests arrived. If I spend one more day stuck in the house in the snow, I may actually do it. :-)
Your punchbowl is gorgeous!
Loving the gleam of the silver.
Love, Cass

Thank you for sharing this technique! I also want to try this on some sterling silver jewelry that I've had trouble brightening.

Wonderful advice! Thanks for sharing!