We love Estate Sales and always have . . .
We prefer them over auctions
for you come, you look, you buy or not
And then you leave

No waiting hours and hours
and then going home empty handed
because you were outbid
as often happens at an auction.

At an Estate Sale,
the price is there
you buy it or not
or you could wait for the last day
and if it's still there get it for half price!

There is a great site called
Estatesales.net
Estate sales all over the United States are listed there
We have automatic emails about the ones in the cities
surrounding our little town

I was trolling this week's offerings when I came across this picture:

And if you looked at the picture and enlarged it the price seemed reasonable.

I immediately called my friend Shirley Ann
She and I are the friends of Adventure
for she was looking for several pieces of
Pfaltzgraff Folk Art
A pattern that she had used and loved in the 80s when it first came out,
fell out of love because she couldn't find pieces to replace those lost to breakage
thus resulting in an incomplete set
But
And what old is new again
And there it was
Lots of pieces including ones that she didn't care about
Sold not as a set but by the pieces

Saturday was the third day
And the half price day
She came over and we left by 7:15
And arrived at the Estate Sale location a full half hour before the sale began
(a must)
And sat in the car chatting until 8:45 when we went with the others to stand in line
at the front door
A full fifteen minutes before the door opened!
It was cold -- really cold
She doesn't do well in cold but she was bundled up
And with frozen noses and chilly fingers
We stood, visited, stomped our feet
(And I reminded her that when I bought my china cabinet that it was colder,
it was also rainy, and my crocs that day had more holes in them!
So this was good!)

Finally, finally, the door opened
From the pictures, we knew that the dishes originally were in the kitchen
And we had a plan
We both would go for the dishes,
I would stand guard over them while she took the ones she wanted to the cashier

If they were still there!

Dinner plates
(way more than she needed but hey, extras are always nice)

And more cups (because they were so reasonable)
which also came with saucers!

We were both giddy with excitement over her purchase!

Once the dishes were securely behind the cashier's counter with her name on them, we looked the other items over.     Neither of us were impressed with the remainder of the stuff
And so, the dishes were our only purchase! 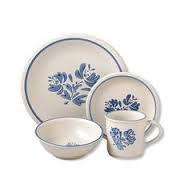 The blue and grey pattern, Yorktown, is the top selling pattern in history.    First produced in 1967 it is still in production today.    Which is probably why you see more of it in flea markets and antique malls than any of the other Pflatzgraff patterns.
The pattern is reminiscent of salt-glazed stoneware.
It is sad that Yorktown is no longer made in the United States.
which means in my opinion, that buying used from flea markets, garage sales, antique malls or estate sales is the way to get the better quality Yorktown. 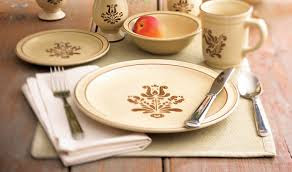 The brown Villager pattern runs a close second to Yorktown.    It does say 80's, doesn't it?    It was first introduced in 1975.    This is the warm earth tones of the 70's translated into dinnerware.   It is a classic Early American look which was popular with the 70's country decorating style.    The pattern was retired in 1996 but by popular demand was brought back in 2004 for 11 years.
The length of production and the fact that newer pieces were made means that pieces are prevalent in flea markets and antique malls. 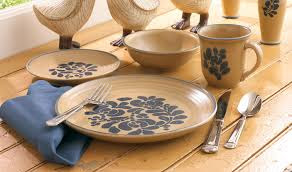 And the third color/pattern was the brown and dark blue Folk Art,
Friend Shirley Ann's pattern of choice.
And to me, I think the classiest of the three.
It was in production from 1977 to 1983.
By far the shortest production period of the three
Which is probably why you don't see as much of it in the secondary market.

But half the fun of collecting something is "the hunt"!

And Saturday we definitely were on the hunt!

Our entire time at the estate sale was a little less than an hour.
We loaded the one box of dishes in the car
And off we went in search of a warming cup of coffee.

We stopped at a couple of other places and then felt we needed lunch. 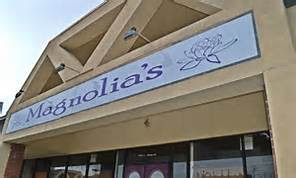 It had been given good reviews on Facebook
And friend Shirley Ann loves Southern food! 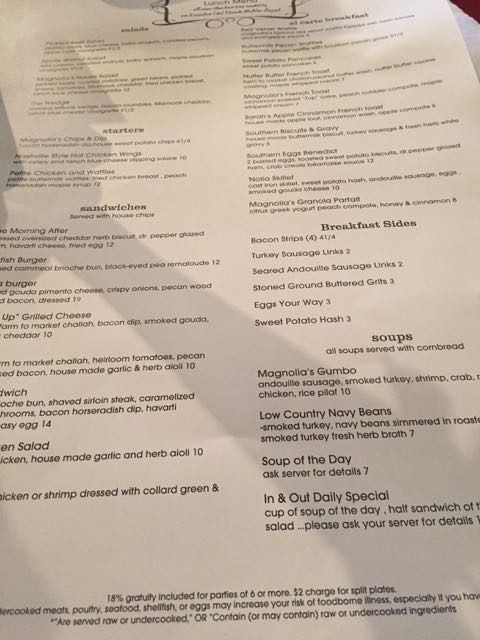 At around 11 p.m., it was both breakfast and lunch

With only a cup of coffee for breakfast, I was hoping for something
hearty and was thinking lunch
But Magnolias breakfast won us both over. 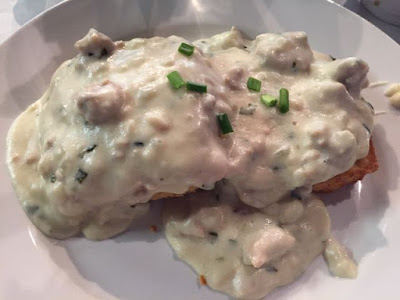 I had the biscuits and gravy
The best I've had outside my own kitchen
The gravy was especially yummy
And probably the best biscuits I've ever had.
Square -- not round! 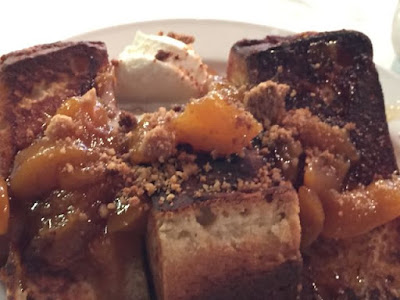 Shirley Ann had Magnolia's French Toast
Cinnamon soaked "7-up" cake, peach cobbler compote, maple whipped cream
Although it was a different French toast, it was so very good.
We, of course, traded tastes!

It was a fun day
Another day of adventure
But in our years of friendship
We've had many of those
(Just ask about our furniture seeking trip to Nebraska, where we winded up in
Weston, Missouri, and Shirley Ann rode home in the back seat surrounded
by two of the four pieces of a parlor set that she bought!)

At least this adventure, the loot of our adventure was on the floor of the back seat
And no one had an uncomfortable ride home!

You and Shirley Ann make a great team! I can imagine the laughs you've had over the years of hunting for treasures.

What a fun day. The dishes are great. Glad she got more!

Congratulations to Shirley! And what a great friend you are, good eye! I, too, am a Pfaltzgraff Folk Art collector. I use my beloved dishes every day and still enjoy them after all these years.

Oh! I went to that same sale on Friday! I bought 6 vintage dark blue Fostoria ice tea glasses. They were in the open cabinets,you probably saw them.Brown Button has the best sales. Never been to Magnolia's, will have to try it. I can never get to sales the first day, as I am teaching still, but I retire June 1st. I am looking forward to hitting the sales on Thursdays, although I don't need more stuff!

I, too, am thrilled for your friend! To find such treasured pieces all at once is just so lovely. And that IS such a classic pattern that I don't think it will ever go out of style. Now, I just wish I had that gravy and biscuit I just drooled over on here. Oh my goodness ... snack time ...

How fun it is to go thrifting with a friend or two...so glad she found the dishes she loves...and glad you both had a good time.
xo bj

It sounds like you and Shirley Ann had a splendid outing. I'm so glad she got her dishes. What a good feeling it is when we find our much longed for treasures! {I felt the same way when I found my Rose Chintz after so many years of not finding it any where.} Magnolias serves up a wonderful breakfast. Do you know I've never had biscuits and gravy? I've often wondered what it tastes like and I adore French toast! So glad you took us along with you. It's been fun!

How fun! Your tag team shopping strategy made me smile. Your post-victory French Toast looks amazing!

The Folk Art pattern was introduced in 1980 and discontinued in 1997. It was also brought back as part of the By Request program.