Ground Hog for Groundhog Day -- or is it Candlemas?

Tomorrow,
everyone looks to this little guy 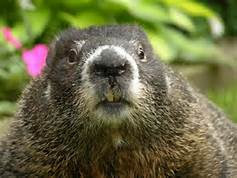 For it is Groundhog Day

Brought to America, it is believed, by the Germans
because
"Last Tuesday, the 2nd, was Candlemas Day, the day on which, according to the Germans, the Groundhog peeps out of his winter quarters and if he sees his shadow he pops back for another six weeks nap, but if the day be cloudy, he remains out, as the weather is to be moderate.

And in honor of 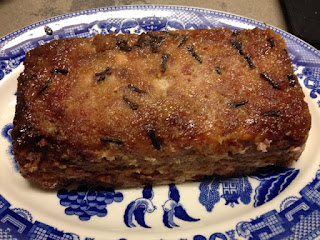 Ground hog in the form of a ham loaf
Daughter Sarah's favorite! 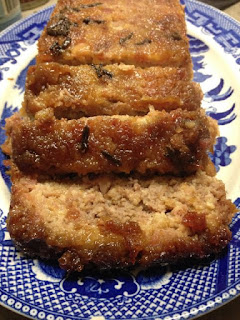 A good use for the rest of the New Year's ham!

Our forecast for tomorrow

So I suppose there is a 50/50 chance that Herr Groundhog may see his shadow!

A Kansas one?
or the famous
Punxsutawney Phil
from Pennsylvania?

And the Pennsylvania forecast is for more sun than in Kansas!
Which would mean more winter!
But for them . . . or us?

The English, however, dispense with rousing a sleepy rodent
And live by this motto:

I think I will go by what the Kansas groundhog sees.
That seems more fair, doesn't it?

Hi Martha, never heard of this ham loaf. Is it ground ham? I see cloves and a glaze is that the topping? Looks delish.

MMm that looks good. I am baking a ham for dinner on Sunday - cousins from away are coming - and there are always leftovers!

You have me giggling. This is a new kind of meat loaf to me. '-)
Happy Groundhog Day!

Lucy -- it is ground ham. I'm thinking it originated to use up the last pieces of ham to form another meal for the family. Sarah ham loaf has been around a long time. I'm thinking it just fell out of favor.

Martha,
YuMMy!!!
My Grandmother use to make a ham loaf after huge family dinners!!!
I have heard that we are to have an early Spring!!!
Disappointed over the lack of SNOW in our area,
but looking forward to fresh Herbs in the Herb Garden!!!
Fondly,
Pat

It's sunny and bright here, so if we had a groundhog, he would have seen his shadow for sure. I kind of think that it's supposed to be an early Spring for those that live in Kansas and Pennsylvania and everyone else is on their own lol

And I love your new Bates bedspread. Beautiful find!