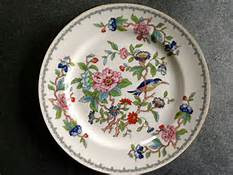 And everytime I would go to Thomas Pharmacy in Nevada
I would drool over it.
But I could never afford it -- it was way too pricey for my meager purse.

And then we took a trip to England
And visited 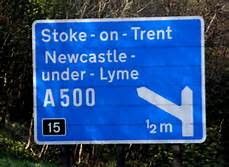 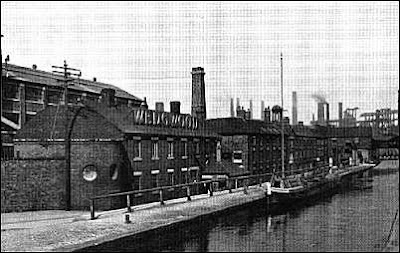 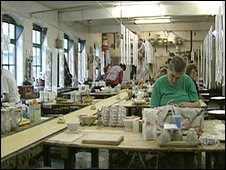 Took a tour and saw the workers working on the china

And picked out
four
place settings of china 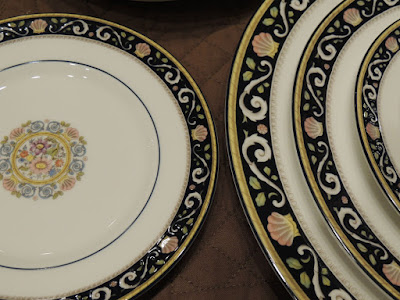 We actually saw some being made.
It is a raised design
And the blue is really almost black
I love the pink shells, the green leaves and the delicate flowers in the center 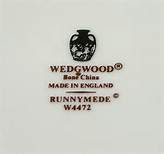 It's real bone china
And I hand carried it home on the airplane
On the international flight, I was in my seat with the box between my legs and a blanket over my lap
before anyone came by and so no one checked to see that I did not have everything under the seat in front of me.

I sat there for the entire trip.
Never getting up for anything!

Then we hit Atlanta, I boarded the plane with my precious box.
And again put it between my legs.
But, alas, there was no blanket
And the attendant told me I couldn't do that.
I explained that I had ridden across the entire Atlantic Ocean with it there
and it and I were perfectly fine!

She insisted I check it.
I "glared" at her.
I wasn't about to give up my precious box of dishes.
That were not packed for the mishandling that they would receive if they were taken below!

She left and came back and told me that the pilot would be happy to let the box ride up front in the cockpit with him -- if that would be okay with me!
(Obviously this was way before 9/11!)
I relinquished my box, watched her carry it forward and then settled down for the last leg of the trip.

It arrived home in one piece and over the years, I added place settings until I had 8.
It was expensive in the mid 80s to mid 90s
$200 per place setting

Then I got my grandmother's Noritake
And I had two sets of china.

And then she got engaged
Surprisingly she didn't ask for the china
(perhaps I had said no too many times!)

The night of her engagement party,
we gifted her with the china

(My reasoning is that she would get it someday -- why not have it now
rather than picking something else out and then getting another set . . . later)

Four years ago, I was in a flea market and there, on the floor
was a pile of 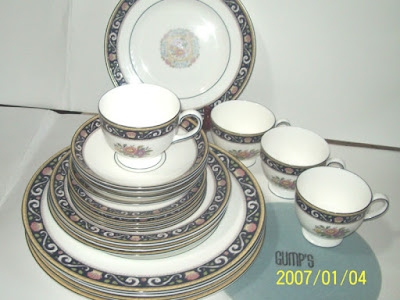 The Wedgwood
My yelp of surprise and pleasure alerted my friend that was with me
that I had found a true treasure.

I bought it quickly and then parceled it out over the next four Christmases.
It made a nice Christmas present and I filled in where needed so that she had 12 place settings.

Last Saturday, we were in Minnesota visiting daughter
There are a couple of consignment shops that we must visit everytime we visit.

And in the second one,

We came across this 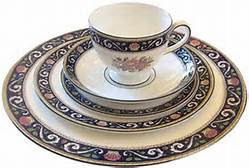 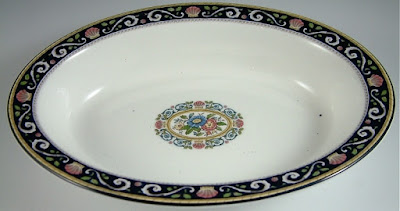 Sarah had TWELVE place settings --
Did she need ten more?

I talked myself out of it.
Husband Jim was with me and told me that I could have my Wedgwood back
But, I reasoned, I have Grandmother's Noritake and my Aynsley Pembroke
I didn't need another set of China.
"Get it for Sarah", he said
"Oh, she doesn't need it", says I

And so we left it . . .
(The second time I've left a really good bargain in china --
The Pembroke was the first time!)

And got home and told Sarah about it . . .
She and I and Lucy jumped in the car
And drove to the shop
It was still there --
She immediately took the tag and the one place setting to the checkout
And home it came!

And I bought for Lucy 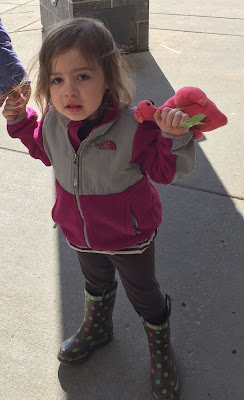 The "Mingo" purse
She loves it!
For she was a good girl while her Mommy was making the china deal of the century!

Oh, and I forgot to mention that anything that was regular price was
20% off
Which made the set around $160 pre tax!

And I passed it up!
Will I ever learn?

The china gods have been smiling on me
For both times that I've done that
It's still been there.

Sarah was thrilled with her additional china
And I am happy that she loves it so much!
Posted by Martha at 2:29 PM

What a lovely story!

I have had similar experiences. Going to garage sales and flea markets and second hand and antique stores is absolutely fatal for one who is a china fanatic as I am. But oh, what fun to be able to set a table with lots and lots of beautiful china! Just for a special occasion, of course.

However, lately, I've been rethinking this idea, and using the "good stuff" for just my husband and me. One friend took a look at the table and said, "good grief, do you always eat like this?" Well, actually, now I do. Because even beans on toast taste better on Wedgewood!!

Martha,
Oh, how I do love a good "dish" story, dear friend!
Glad that it worked out for Sarah, and for Lucy!
Thanks for sharing your adventurous stories as you travel!
I adore a "Happy Ending"!
Fondly,
Pat

You had me worried there for a moment, Martha. I'm glad to read that the china came home, after all. It really WAS the deal of the century!