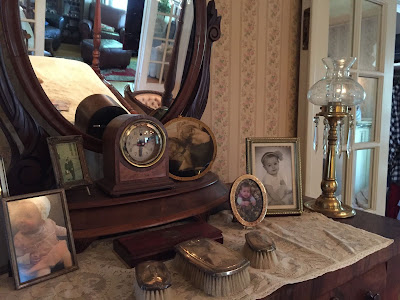 I bought it in 2001
It came from an antique shop in Buffalo, New York
And as I'm prone to do, I find something I like
but talk myself out of it
And then, once home, I decided that I wanted it

I called the antique shop
It was still there
(and it's not like calling a retail store with an item number either . . .
It's like, it's on that bureau that's by the second door on the left . . . )

And it was before cell phones and texting --
It was the "old" days!
We had to resort to my description of the item, the price (which I remembered), and the location in the store!

They found it, I charged my card and they sent it to me.

I found it a year or so ago
And when I found it I managed to break it's globe!
Silly me!

So it sat on a shelf in the basement

And then when I was rearranging things a bit, I remembered it
and brought it upstairs.

And yes, I liked it!
It looked good on the chest
(And I'm partial to lamps with crystals -- don't ask how many I have!)

But I needed a shade
One lamp and one sconce equals two
And one shade means one is "shadeless"!

Today, out and about in Butler, Missouri
at a Thrift Store, I found . . . 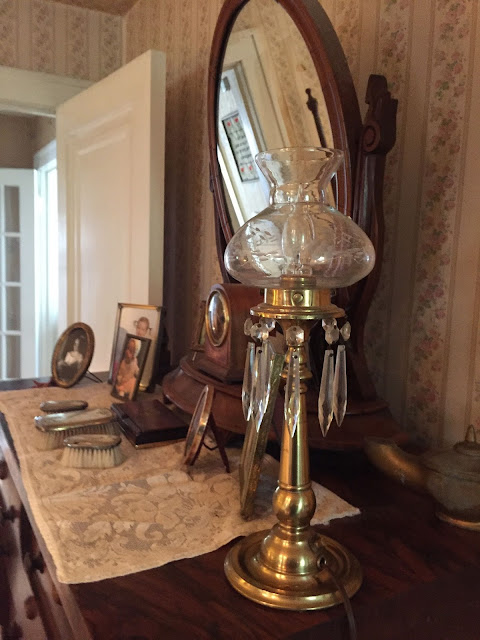 A globe!
Friend Shirley Ann says that it's Princess House
I liked the shape
I liked the price ($2.00)
And I like it on the dresser
I think it's probably from the 20s or 30s
I don't think it's earlier.

And I'm in love with it all over again. 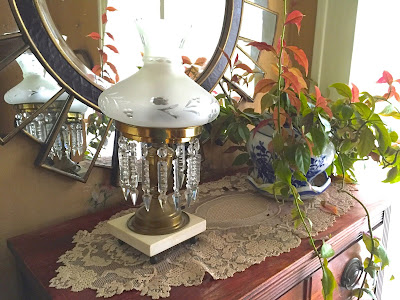 I'm happy with the rescue of my little lamp
And the new shade that I found for it.

And it has a good story . . .
But then almost everything at Linderhof does!
Posted by Martha at 8:42 PM

Of course it has a good story! It's the stories of our things that make them interesting to us and as a result tell our story.
Thanks for sharing.
Happy Mother's Day!

Love the new shade better than the one it use to have. Everything should have a story. Was sorry to read that Jim had had surgery recently. I hope he is on the mend.