Plan C - A Luncheon With Adversities

I belong to a heritage group 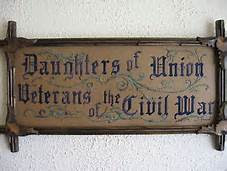 "daughters" (great, great-great, and great-great-great) of men
who fought in The Civil War
on the side of the Union.

The chapter, Louise Volker Macklind, is from Kansas City
and monthly, I make the trek north to attend meetings.

When we planned our meeting this year, my suggestion for a trip to Fort Scott
resulted in plans for coming to Fort Scott, having lunch and  visiting the Fort in June The purpose of the tour was our National Historic Site,
which dates pre Civil War but also saw activity during the War Between The States

But you can't come to Fort Scott without having lunch.
I made arrangements with a friend to do lunch in her Victorian house
But circumstances made that impossible

And so to Plan B
Lunch at Linderhof

With the able assistance of Friend Shirley Ann,
we made plans for lunch and prepped what we could

We had a good response and had 17 who planned to attend!
Coming not only from Kansas City, but from the Topeka area and Holden, Missouri

But now to Plan C

We had a bad storm during the night before the DUV was to come to Fort Scott and awoke to
no electricity! 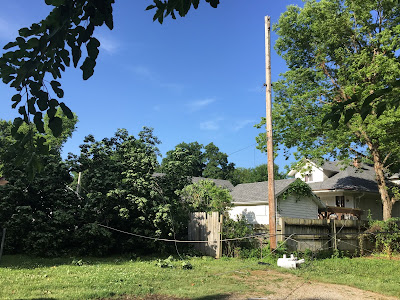 The reason was in our neighbor's back yard 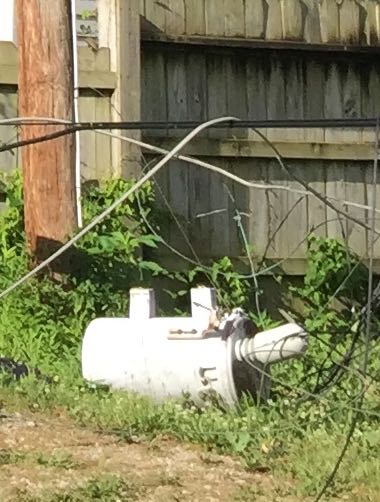 You need this -- a transformer -- on a pole and the wires up in the air!

The guests were due to arrive at 11!

The tables had been set 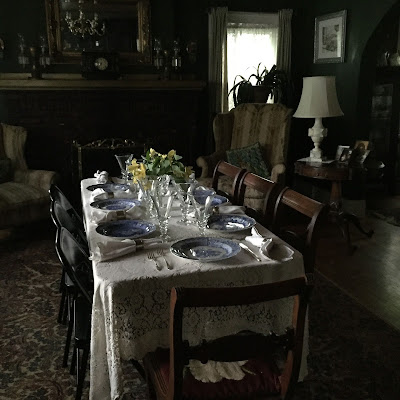 Eight in the living room 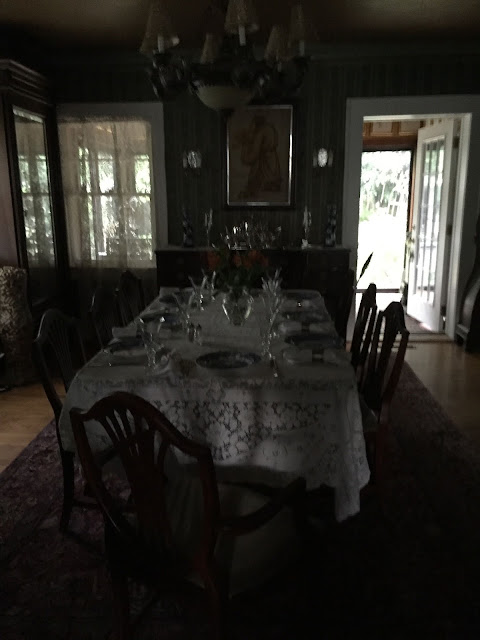 Nine in the dining room 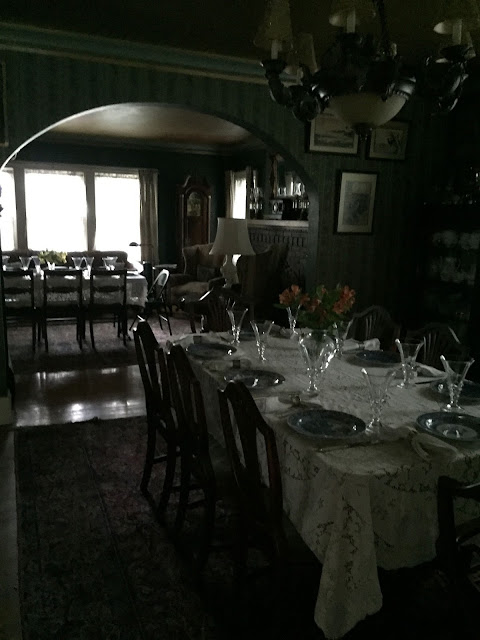 Dark, but being an old brick house, it remained cool indoors
even though outdoor temperatures were reaching toward 90 by 11 a.m. 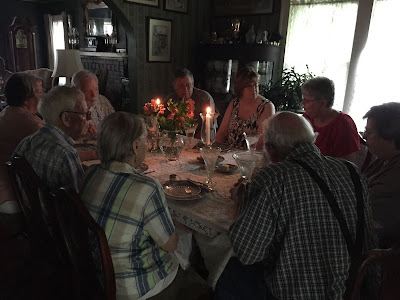 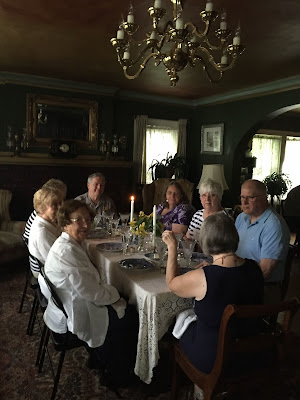 And for lunch we served: 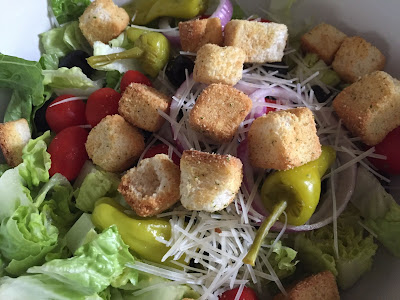 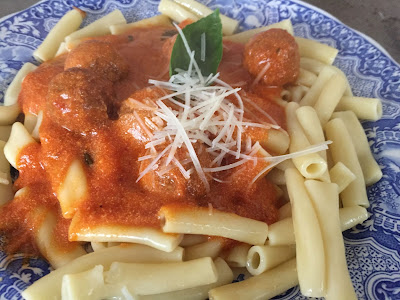 Meatballs with a homemade tomato ricotta sauce over ziti 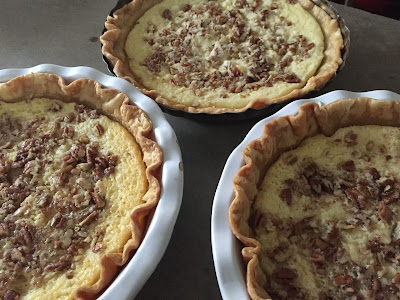 The Cortland Buttermilk Pecan Pie
(thank heaven you make pies the night before!)
All baked and ready to serve!

We dined by candlelight and were grateful that years ago,  we had selected a gas stove
(whose burners worked if you lit them manually)
We changed our main dish from a baked one to a stove top one!

After lunch we headed downtown 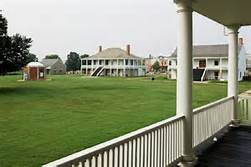 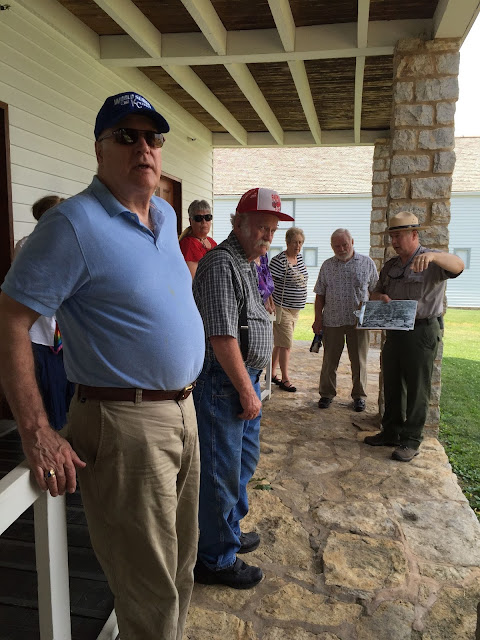 Where Fort Historian Bill gave us a personal guided tour.

As we tromped around the fort, listening to it's history
from the Master Historian, it was hot
We were grateful for Captain Swords quarters
(air conditioned)
and the Mess Hall
(not totally air conditioned but cooler than outside!)

We ended the tour in The Grand Hall
(air conditioned) 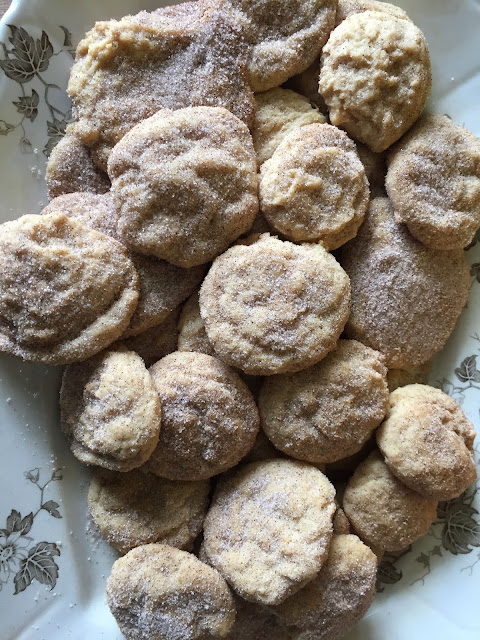 Both much welcomed after an afternoon at the Fort.

I want to thank Fort Superintendent Betty Boyko for making arrangements for our tour, and Fort employees, Galen Ewing and Bill Fischer for making the tour so special for our Group.

If you like early American history -- from the 1840s through the Civil War,
and you're close to Southeast Kansas,
come visit the Fort Scott National Historic Site

Even though it is in our town, we think it's really special!

Lovely ! I'm sure they gobbled up your wonderful menu! Great job.! Lots of work!

My goodness - that was quite a recovery you pulled off! Well done, Martha - I'll bet everyone will be talking about the afternoon for quite a while.

Martha, you absolutely take the cake. Can't believe you carried it all off in style under such adversity.