We all traveled to Arma tonight
For Arma Angela hosted dinner
Her theme:    Memory Food

The hostess always provides the entree and Angela chose 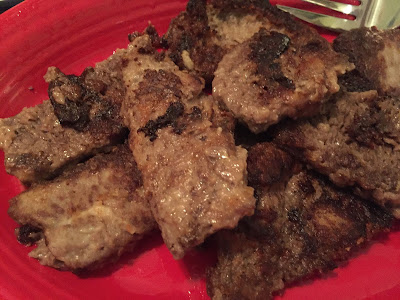 Round Steak
Which her Aunt Ollie always made in a cast iron skillet.
Angela and her Mom  have perfected Aunt Ollie's recipe although not in a cast iron skillet but an electric one
"And you buy the round steak at Ron's" Angela informed us "and have it run through the tenderizer TWICE!"
It was good.   It was comfort food.    And, to me, it tasted like "home" --
it tasted like what my mother made! 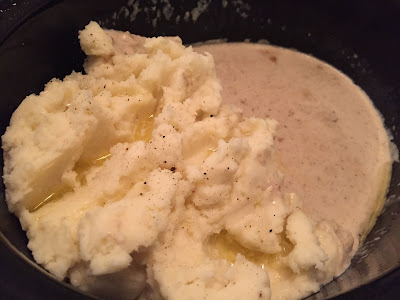 Mashed potatoes and gravy
Angela M. (original Angela) chose this dish for it is a family favorite! 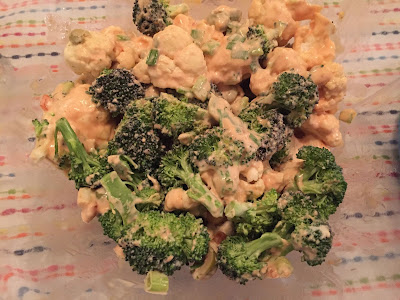 Donna's Salad
Which I brought.    Chosen because Donna's not a long time relative but in the mid 70's when Salad
Suppers and Salad Luncheons were so popular,  and Donna brought this to an early one.   (Hence the name)  I loved the combination of broccoli and cauliflower (probably the first broccoli/cauliflower I ever had) and with green onions, sliced olives and a dressing made from Ott's dressing and mayonnaise, it was to me a "gourmet" dish.    Probably my first "gourmet" dish.    And I still make it occasionally! 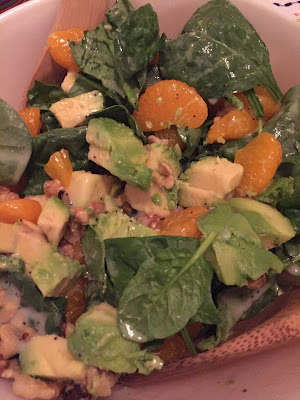 Spinach, Avocado, Orange Salad
This was California Barbara's contribution and although it is not that old of a recipe, it is a favorite and she always brings an empty bowl home when she takes it anywhere.    I didn't get the "real" name of the salad but I shall always call it "Barbara's Salad"!    With the avocado and walnuts, it definitely has a California flair! 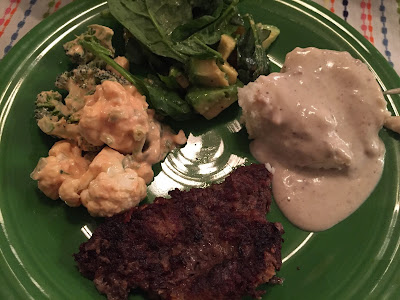 A pretty plate of food on Angela's Fiesta.

But women do not live by food alone . . . we like dessert! 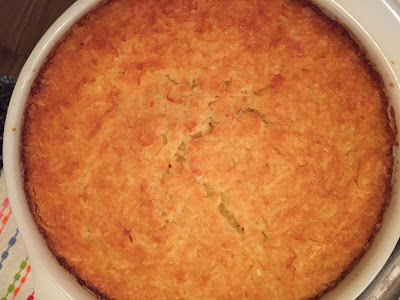 Impossible Coconut Pie
A recipe from Donna's grandmother.    She made it for family holidays and the one pie turned out to eventually be TEN pies because everyone in the family wanted a piece of this dessert!
It's a good dessert and has a nice coconut flavor! 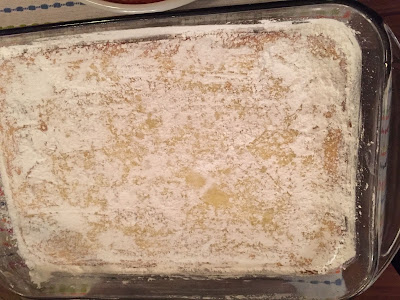 Gooey Butter Bars
From Donna's other grandmother who lived in Arizona.    She would make these and pack them for the trip home that Donna and her family made.    Donna said that by the time they left Grandma's city limits, the bars were gone! 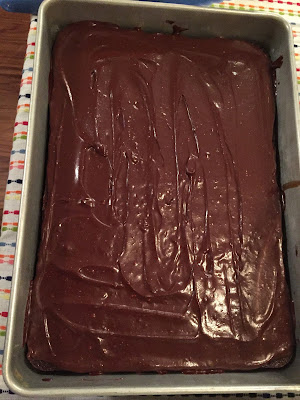 Old Fashioned Chocolate Cake
Edgar's contribution to night.   It's an old fashioned chocolate cake but a good chocolate cake.    Picnic cake!    It's like what my Mom or grandma would make for picnic desserts or if they took dessert for a bereavement.    It's a chocolate cake that can't be beat! 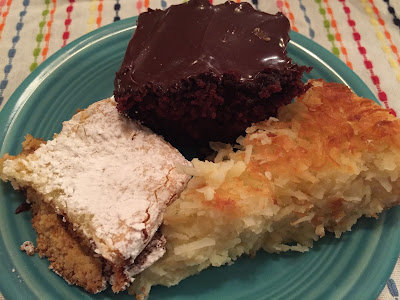 And what a nice plate of desserts.
And we all ate every bite!

Because we don't have any "connection" other than loving good food, conversation is usually lively and diverse.     Since we were down "south", we had some Mafia stories tonight.    But talk also turned to beloved Aunts and grandmothers. . . . and how fooled we could be at Christmas when Santa was to come!

We're looking forward to the next edition!

I'll share Edra's cake recipe.    If you're looking for a good 9 x 13 chocolate cake, this one is a winner:

Add these two mixtures together alternately with 1 cup sour milk** or buttermilk and 1 t. vanilla.    Place 1 rounded teaspoon baking soda in a large bowl and add 1 cup boiling coffee.    This will fizz.   Stir quickly with spoon and then pour into batter hot.    Mix thoroughly.    Batter will be thin.    Bake at 325 approximately 35 to 40 minutes.

All of the food looked like wonderful comfort food to me. If your group is anything like ours we walk away stuffed. My dinner group does not get together during the summer months but will meet again in Sept. My luncheon group met this past Tues (always the fourth Tues of the month) and we cooked from Ina's "Make It Ahead". Everything was amazing. I took the Paella Salad which was extraordinary. Haven't had a chance to post my pics on my blog yet but will soon. Our hostess was particularly creative. I am so enjoying this group and most of them I am just becoming acquainted with so an opportunity to make some new friends.

A Comfort Food evening is such a good idea. By the look of the two plates you were all well fed - I'll bet the men were envious!