It's early this year . . .
The Naked Lady sightings
in our little town . . .
(It's usually August before such scandalous happenings occur) 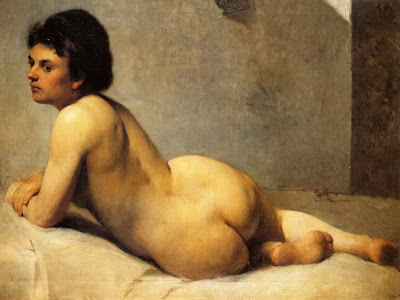 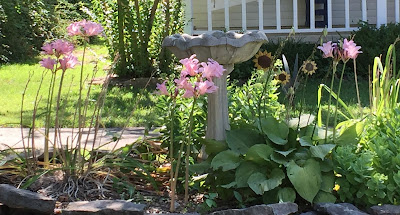 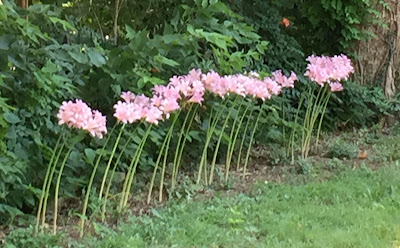 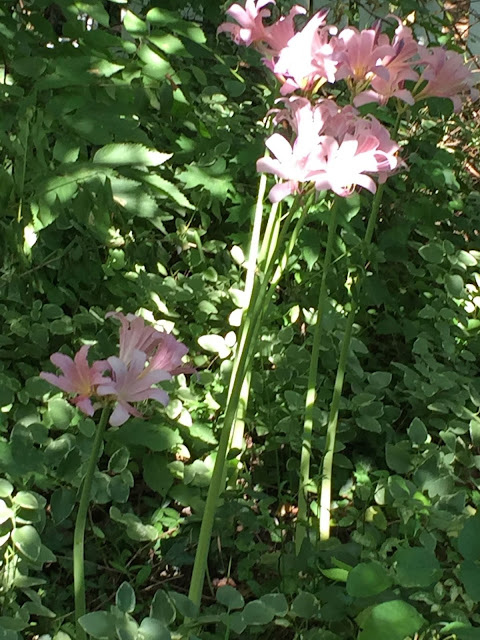 And in the garden at Linderhof 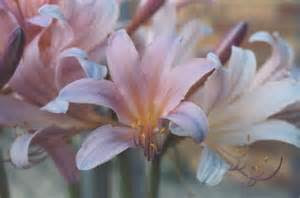 You can see where some of the names come from
The "naked" I think from the fact that the "bare" stem rises from the ground and into bloom
No foliage!
The other names -- magic, surprise refer to the plant's split personality. 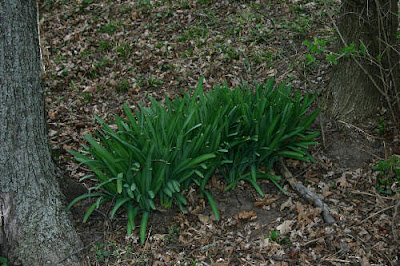 For in Spring, when the daffodils and tulips are blooming,
this foliage springs up
This is your first "naked lady" sighting
The leaves in the spring.

Like feuding in-laws, the leaves and flowers refuse to appear together!

The good news is that they are an easy plant to grow for they're not picky and they're great in a border where their foliage helps fill in before other later perennials appear.

They do best in full sun but as you can see from the sightings around town (and in Linderhof's garden), they will be okay in partial shade.
I'm told that the bulbs multiply and every 5 years or so should be dug and separated after flowering . . . but I've never done that.
I also have some that come back every spring with their leaves but don't bloom in the summer.
Next year, I'm going to mark them and then move them next summer
(for they're best separated after flowering and now I can't remember where they are!)

When it's hot in summer and gardening is limited mostly to just watering the plants so that they will survive the heat and humidity until later summer or early fall coolness comes,
the naked ladies bring a smile to my face.

I love the faithfulness of their blooming year and year
With very little attention on my part!

Do you ever see any "Naked Ladies" in your town?

Martha,
I tried moving and riding our lawn in Prescott of "Naked Ladies"!
Year, after year, after year. . .and still they returned!
I would bet to this day, if I drove past the "Dream Home",
there would be a clump of them on the North side of the lawn. . .still!
I'm glad you enjoy them. . .as did my Dad!
Fondly,
Pat

They're pretty, and if they are hardy and stress free I think I would like them a lot!

They're pretty, and if they are hardy and stress free I think I would like them a lot!

I used to see them along the fence of an older home in Richfield, Ohio, but they don't seem to be there anymore. I think someone removed them, alas....