And on a trip to Minnesota for oldest grand's third birthday,
we shopped a bit

Patting myself on my back,
I did leave a lamp that I was going to buy
And right now it's a decision I don't regret

But at one of our favorite consignment stores, I ran into this: 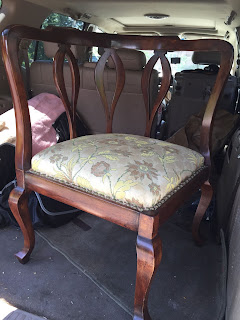 It's a corner chair
I've always coveted one
(And actually I still have room in the car for more furniture and lamps!)
It's a nice chair and there was a 20% off sale going on in the whole store on
furniture and dishes and such 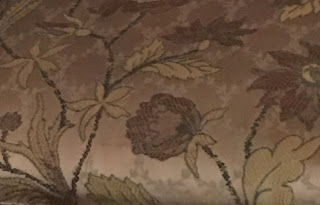 But what sold me on the chair was this:


And another similar sticker that read
that the chair was found in pieces in a barn in Denver, Colorado
and the owner paid $4 for the pieces
There was the word "antique" and then there looked like there were two other stickers
that might have told more of the story.

But . . . the story is not true for it's not an 18th century chair
But rather a late 19th century or early 20th century one

Antique dealers back in the day often told the story of how
"the piece" was found in pieces in a barn . . .
and was far older than it was.

I'm thinking that the person who consigned the chair, probably did not write the messages.
They probably were suckered in by the messages
(as I was, sort of)
And felt that the chair was far older than it is.

Did they ever find out the truth?
Perhaps which is why it was consigned.

But I think not for although the fabric's colors go well with the rest of Linderhof's living room fabrics, it is an older piece of fabric.      I'm thinking 60s or70s.
Which means that it may be part of an estate that was consigned to the shop. 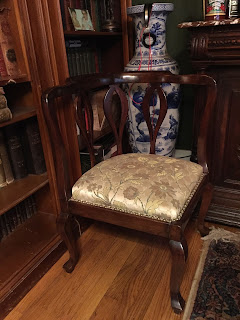 The chair in a "corner" of the living room
It's handy and now we can seat 10 in the living room without borrowing any chairs from dining room or breakfast room!

Did we find anything else?
A wonderful sewing basket, some old picture frames (the dime store brass ones from the 60s) for I have grands now and their pictures are everywhere!, an old cookbook and a fine linen dresser scarf with handmade crochet edging.

I did have my head turned by another chair or two (or three) but I held fast . . .
I was pressing my luck on getting another chair

But it makes the furnishings of Linderhof fun!
For almost everything "has a story"!
Posted by Martha at 8:15 PM

This chair is lovely and unusual and I think you will never regret getting it.

It's always more fun to have a piece of furniture or lamp with a history or story! Beautiful chair! I could easily become a chair and lamp collector, but I have to ask myself, "and where would you put it, miss money bags?" LOL

Oh I love chairs too. It is indeed hard to pass up a good chair. This one is really a nice one.

Martha,
Lovely corner chair, dear friend!
I adore the curvature on the back!
Fondly,
Pat

What an interesting chair and great to have a story with it.