When I gave the program to the Pink Dogwood Garden Club last week,
it included lunch
And Friend Francie had the most gorgeous table 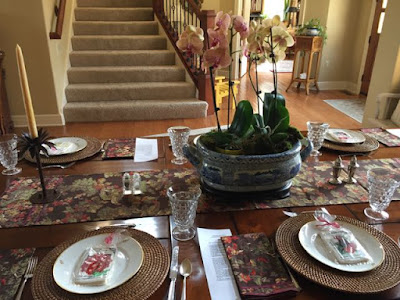 A touch of blue and white, elegant china, earthy rattan chargers, antique glassware
And the most beautiful runner and napkins
They had the colors of fall
But weren't "False Fall" with leaves and such on them.
They will work as well in January as they do in September
But in September, they won't just be pretty, but they will remind one
that it truly is Fall. 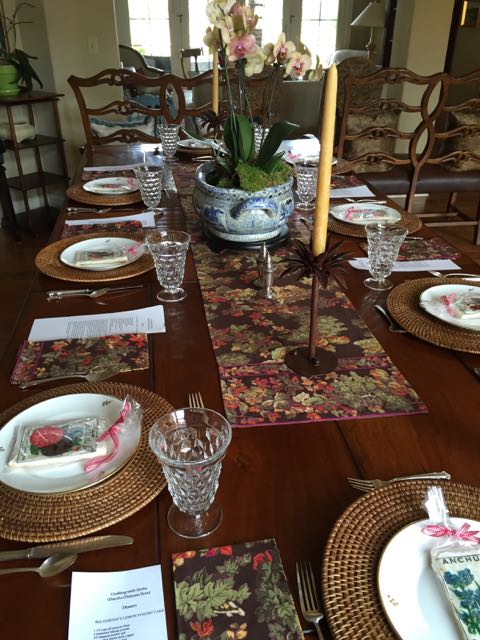 So pretty and Friend Francie was kind enough to tell me that they were
April Cornell linens.

I came home, found April Cornell website, and alas,
they had tablecloths, dish towels in the pattern
But NO napkins or runners.

That was what I coveted --
It would make for a great table at Linderhof
this fall
And for The Lunch Bunch luncheon next week.

So I got creative . . .
And ordered their biggest tablecloth.

I reasoned I could get a runner and 8 napkins out of the fabric
It was on sale and actually, it was very economical
Much more so than the regular price of similar linens at April Cornell

It came yesterday
And today I had the time 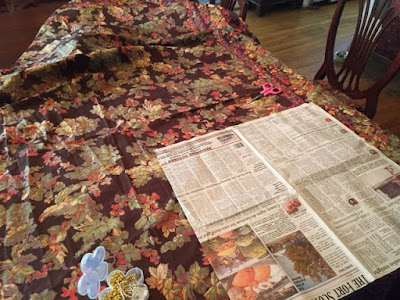 I measured, added extra for seam allowance
made a pattern out of the newspaper

And began to cut out a runner and napkins 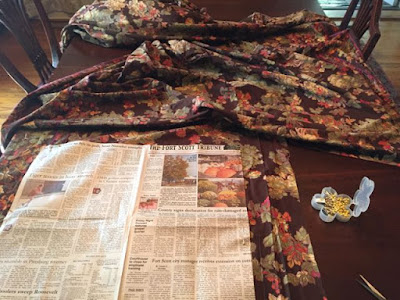 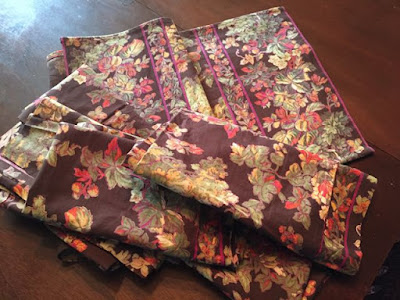 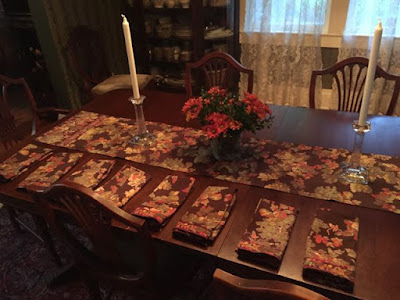 All done!
I need to press every thing
(and trim threads off of everything)

But they will be the perfect linens for my lunch next week!

Thank you, Francie, for telling me where they came from
Although I was thwarted by no longer being in stock,
I did find a solution
And it worked!!!!

And, Francie, I'm not trying to totally copy you
(last month Lunch Bunch's luncheon was the same menu as Francie used
for her garden luncheon -- she told me what she was having and I copied!  And now the linens!)
But isn't copying the sincerest form of flattery?

So I'm not copying but flattering
dear Friend Francie

The Luncheon is next Tuesday,
come back and see what a pretty table these linens set.
Posted by Martha at 10:42 PM

I too make lots of patterns out of newspaper and keep them in a file folder for another time. The fabric to choose is lovely. You did a great job. Glad the fabric was on sale too!

What a clever girl you are! I love the idea of buying an extra large tablecloth and cutting it up to make matching napkins and a table runner. Thanks for the tip! And happy holidays to you (if a bit early!) xoxox Canadian Chickadee

Thank you, Martha. You really are so clever to create the runner and napkins out of the tablecloth. I am so flattered.