I had a maiden Aunt,
Aunt Pearl
Since she never married, she continued living with her mother
until her mother passed away.

She had a job -- not a career
And when I spent a summer week at Grandma's, I thought it was so exciting
that Aunt Pearl would get up in the morning, breakfast, get dressed
and then go off to "the office".
She worked for Safeway, a grocery company in the accounting office
And actually, I'm not sure what she really did
at "the office".

Since she always lived with her mother, her mother did all the cooking
or almost all --
Aunt Pearl at Christmas would make fudge and divinity
And often for Sunday dinner she would make her famous
(at least famous in our family)
Orange Cream Pineapple Salad
(or as we called it, orange jello salad)

It is one of those sweet and creamy jello salads
that so often are on the potluck table
that are really more of a dessert than a salad!

But it is good 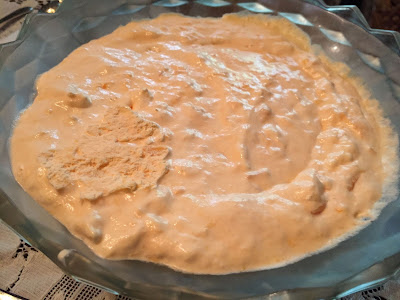 Orange creaminess in a bowl
Always served in a glass bowl! 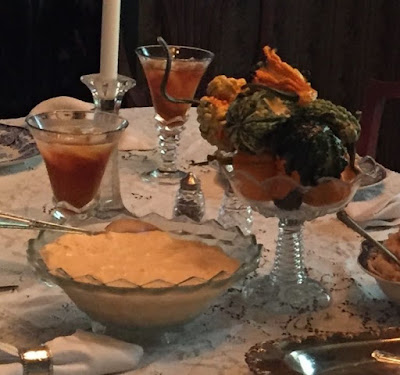 It made it's appearance Sunday for our family dinner.

I had thought that I did not have the recipe.
Something that got pitched when either Grandma passed away or
Aunt Pearl herself passed away.
For neither really kept recipe cards or folders
or even clipped recipes from the paper to try.
Grandma was not a really adventuresome cook, you see.

But then I was thumbing through the cookbook that Aunt Pearl's church put out
and although she never submitted a recipe for print,
she did write "the salad" recipe on an empty page! 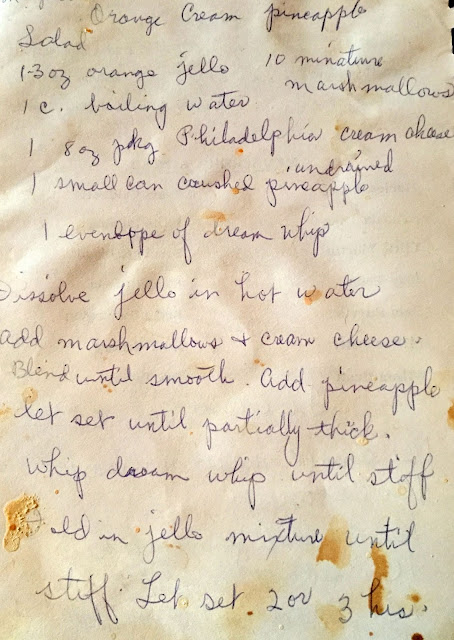 And with the blobs, I assume that this is the exact copy she used.

The only change I made was that I used the small carton of Cool Whip instead of Dream Whip.
And why 10 small marshmallows, I don't have a clue.
10 BIG ones, yes -- but 10 small

I had many requests for this recipe when I did my post about Sunday Dinner
So I thought I would share.

For all my readers who wanted Aunt Pearl's Orange Jello Salad Recipe!
Posted by Martha at 6:06 PM

Oh thank you, Martha! The ingredients are on my grocery list for in the morning! Can't wait to try it out!

Love this post! Your Aunt Pearl sounds like my Aunt Lottie. She was widowed very young, so lived with her parents until they died. We thought she was very glamorous, as she worked in a department store and always dressed beautifully, usually with matching sparkly earrings and pins. And HER version of this salad is a pineapple one, but SO good! I love the idea of serving it in a glass bowl, although its color isn't as pretty as the orange version.

Thank you! The orange color is perfect for Autumn and I can't wait to make it.