Branson, Missouri
A destination/vacation spot
for the Midwest

It was a quiet sleepy town in the area known as the Ozarks known for fishing because  first of all for the White River and then for
Lake Taneycomo which was built early in the last century for power
A snake of a lake, Branson is one of the towns that dot this lake made from damming up the White River

It is bookended by Corps of Engineer Lakes 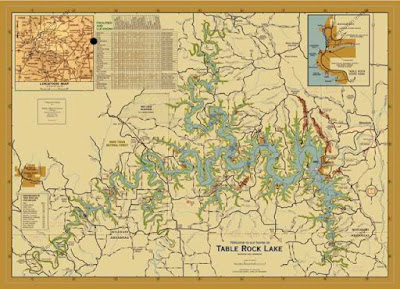 Table Rock to the west 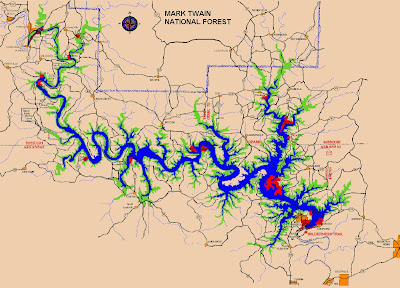 And Bull Shoals to the west and down into Arkansas 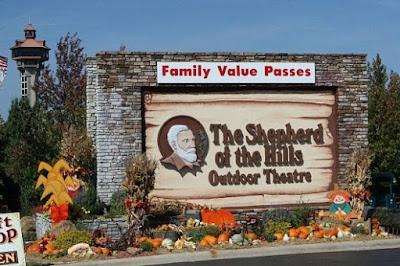 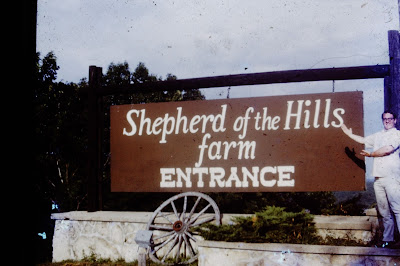 For in the 70s it had a different sign

"Old Matt's cabin" and other things from the book written by Harold Bell Wright about this area of the Ozarks, brought tourists to the area.
And "Shepherd of the Hills Farm" was born.
They have a gift shop (of course) and nightly do a Shepherd of the Hills Play
and have for almost 50 years!

The most famous attraction, however is . . . 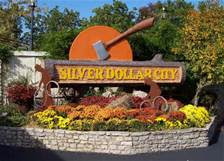 Silver Dollar City
It's been entertaining folks for 56 years

And to think it all started because of 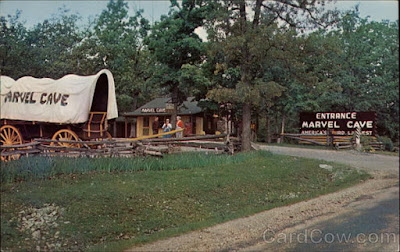 Marvel Cave
The third largest cave in the United States
To entertain those who were waiting to go through the cave,
they built a street and would have gunfights . . .
It wasn't long before Silver Dollar City was more of an attraction than the Cave
that started it all. 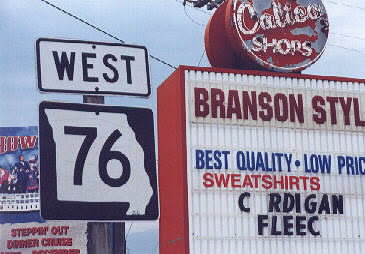 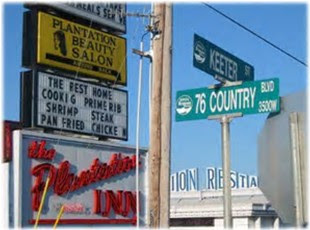 Also known as "76 Country Boulevard"
for years, it was the only way to get from Branson to Silver Dollar City

And along "The Strip", artists opened theaters, motels were built to house the tourists who came to the shows and restaurants were built to feed those tourist. 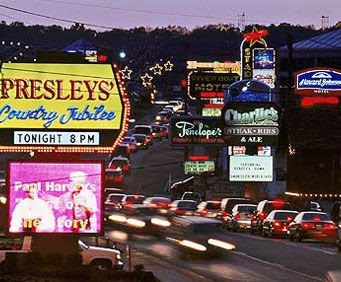 When the shows got out in the evening,
it was bumper to bumper traffic
creeping along back to your motel 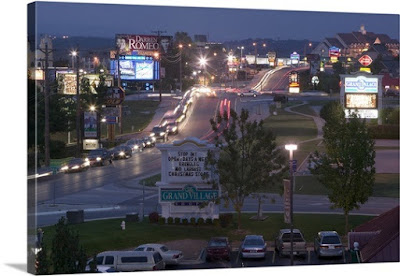 Branson realized the problem and because of better technology was able to build
roads around Branson -- called the "Green Loop", "Red Loop" or "Blue Loop"
Whichever loop you take, it allows you to go from Silver Dollar City to Branson without inching along!

And, of course, growth with more theaters, restaurants and hotels along these
routes.

And then there is old fashioned Downtown Branson 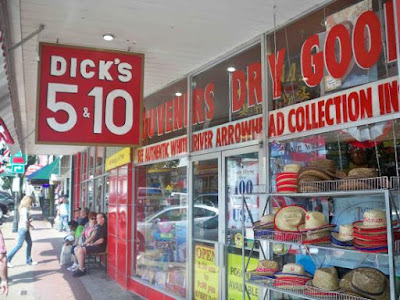 Dicks 5  & 10
A must see downtown
An old fashioned "dime store"
full of an odd assortment of merchandise
And I don't see how they ever do inventory --
the store is that packed! 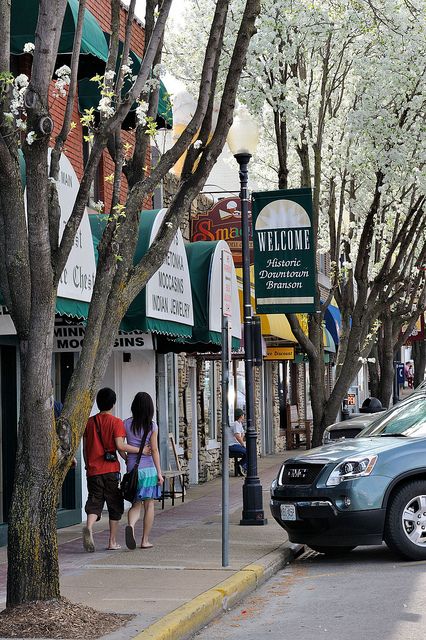 A normal downtown with "tourist" shops --
not T shirt shops but stores filled with merchandise that tourists
would like.

At one time, Branson was the "Craft Hub" of the Midwest
but on this visit I noticed that the craft part was not as prominent as it had been on
earlier visits.
It's still there, but just not as much!

In order to lure more upscale visitors, they built 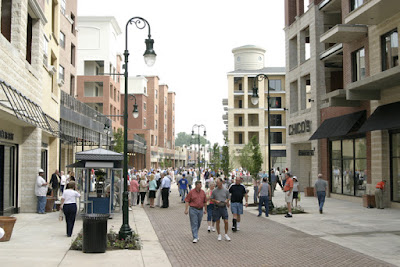 Branson Landing
Full of tonier shops and restaurants
Stores that you see in most metropolitan areas
anchored by Missouri's own, Bass Pro Shops 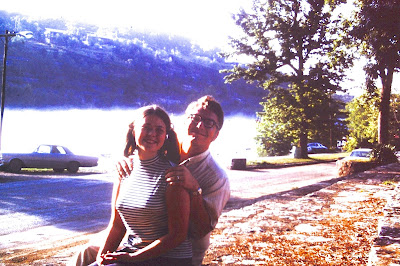 used to be just shoreline along the Taneycomo
Forty-three years ago!

Not far from Branson is the small village of Hollister 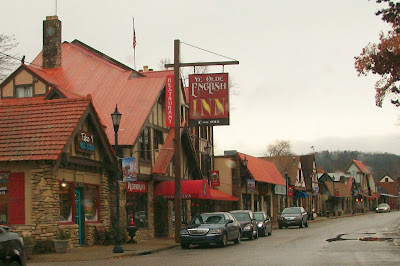 I'm not sure why, but they decided to make Hollister an English village
and their main street looks like a village in England
For years, it was Branson's poor relation but on this visit,
I noticed that more store fronts were filled.

Branson is known for it's food
For years, it was "home cooking" Mom and Pop type of restaurants
with a McDonalds being the only chain
Biscuits and gravy and chicken fried steak were on almost every menu.

But Branson is more upscale now and more restaurants are chains
than Mom and Pops.

On the way down, we stopped at Smith's in Bolivar.
We've been eating at Smith's for years in Collins, Mo.
but the realignment of Highway 13 caused the restaurant to move to Bolivar 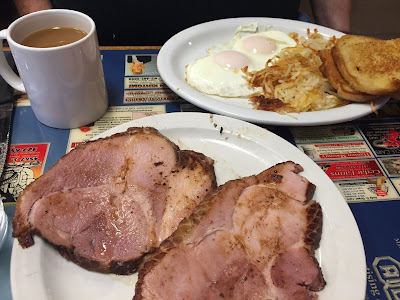 One breakfast
And we shared! 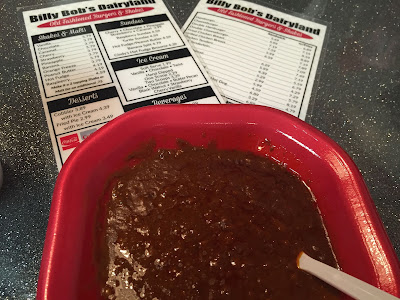 Billy Bob's a Branson tradition
Their hamburgers are good but we were too full to even have a burger! 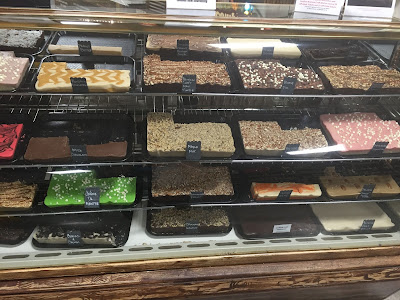 And a visit to Branson isn't complete without fudge!
There are fudge shops everywhere!
A throwback to early Branson tourism

This morning we had breakfast at 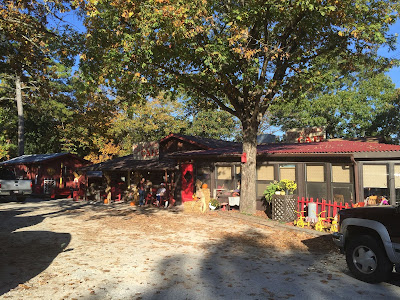 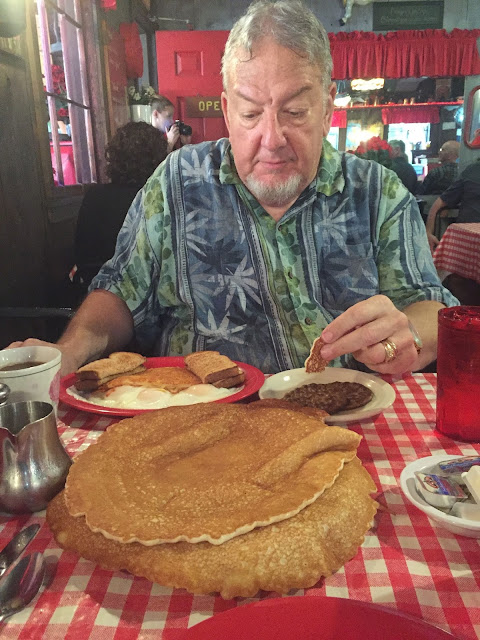 And yes, this, too, is one breakfast
And yes, indeed, we shared
Look at those pancakes!

When Branson got more touristy and those outer roads were built
to enable traffic to move more freely, three "Outlet Malls" opened
One has closed, one is partly open and the third seems to be booming
With the number of tourists and half of them women, outlet malls to me made a lot of sense
But it didn't work! 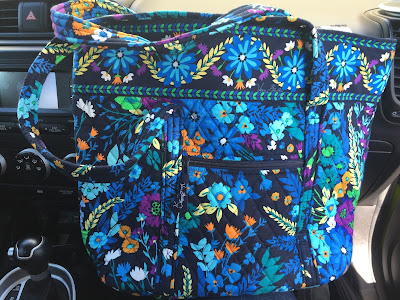 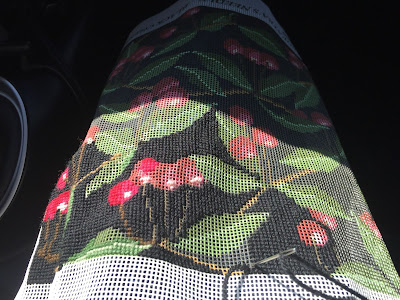 For whenever I'm in the car, that's what I do . . .
My newest canvas
Cherries from Cleopatra's Needle

Jim and I have been coming to Branson since our honeymoon
(although it was closed since it was November)
but we went back the following year and have made many trips.

It is fun to see how it's grown
And to remember
Posted by Martha at 9:04 PM

Loved this, what a nice fall outing! Loved the 43-year-old picture of you two.

I love your account of Branson. We've been going there more than fifty years and have enjoyed it so much. If you haven't been to College of the Ozarks just south of Branson you might want to go there to eat. On sunday they have a huge buffet and you need reservations. Most of the food is grown by the students including the meat. Fall is a great time for a visit as the crowds are down and the leaves are gorgeous.

Great picture of you and Jim!