On Monday, friend Cass (from That Old House)
posted this picture 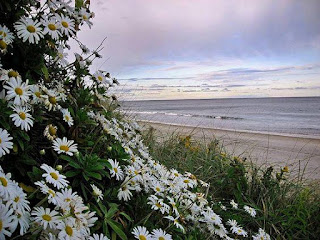 And this:
So, Montauk Daisies. Three years ago, I planted two gallon-sized Montauk Daisy plants that I bought from a local grower. I'd grown nice Montauk Daisies at our last house, but I didn't buy them at a greenhouse; I dug them up from my parents' Long Island beach house.
The legend is that a shipwrecked Japanese vessel deposited some of these native-to-Japan plants on Montauk many years ago, and the hardy little devils naturalized along the beaches there, picking up a new name in the process. In the Fall, Montauk Daisies are blooming everywhere on eastern Long Island -- really, everywhere. They are a spectacular last hurrah of brilliant bloom before winter.
The Montauks I planted at our last house grew, as Montauks do, into lovely big piles of thick succulent foliage and late blooming pure white daisies. But then, our last house sat alongside a river. Water. The Montauks seem to like that.
I expected the Montauks that I planted three years ago to be big monsters of fabulous bloom by now. Well. Best laid plans and all that. One never had a chance. The landscape dudes yanked it out as a weed a couple of years ago. The remaining one is struggling along, apparently quite aggravated about not being in the Hamptons vicinity. It is slumming, and doesn't like it. Sigh. ...
The glorious picture below is of Montauks in their now-natural habitat, without any care at all except what Mother Nature gives them. The other picture is the poor wee little fella in our Prison Yard. Maybe when we move to a coastal area when we retire, we can once again enjoy the glory of those late-blooming Montauks.

The picture above, of course, is the coastal Montauks.

I had never ever before heard of this particular plant.
They're not big on the prairie
For you, see, we have no coast!

Tuesday, I went to the Farmer's Market to buy a pumpkin . . . 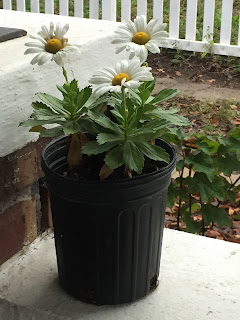 I came home with this!
Yes, if you guessed this is a Montauk Daisy you would be right.

One of our nurseries, Redbud,  sells at the Farmer's Market and they brought some of these to the market.
I COULD NOT believe it.
And it was only $4.50!

And they told me about the big barrels of the daisies that were there.
Huge, she said.
Thursday, I went to the Chamber Coffee at Redbud.
And I saw the Montauks 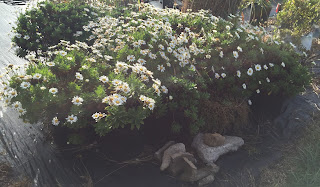 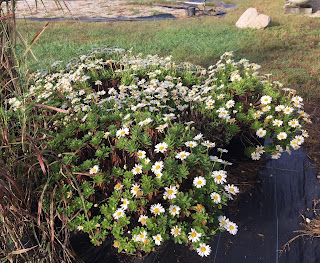 Each mound is ONE plant!
One mostly neglected plant, she told me.
They water but not all that often.
They just leave them be!

So I did some research on Montauks and this was what I found . . .

Nipponanthemum nipponicum, common names "Nippon daisy" or "Montauk daisy," is a plant species native to coastal regions of Japan but cultivated as an ornamental in other regions.[3][4] It is now naturalized as an escape along seashores in New York and New Jersey.[5][6] It is the only species in the genus Nipponanthemum, formerly considered part of Chrysanthemum.[7][8]
Nipponanthemum nipponicum is a shrub up to 100 cm (40 inches) tall. Most of the alternate leaves are clustered near the top of the stem. Flower heads are up to 8 cm (3 inches)across and are borne singly. Ray flowers are white, disc flowers usually yellow but sometimes red or purple.

I like Cass's story, although this does allude to the "escape"!

And yesterday I planted my new little plant in the garden 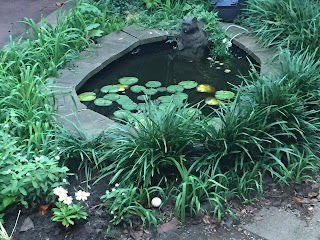 Because it likes seashores, I thought it might thrive at Linderhof's Pond Shore!

Thanks, Cass --
I'll think of you everytime I see the blooming Montauk!

And if you want one for yourself, Redbud still has some . . .
That is if Randy and Karen don't buy them all --
for you see they've just come back from that area
And were smitten by the Montauks!

Very interesting story about the Montauk Daisy! I'm curious how your Daisy will look in a few months.

Oh, aren't they pretty! I love daisies and these are so sweet planted next to your pond. I hope they flourish for you.

Perfect place for a little pure white in the fall. I enjoyed your story.