Last night was our Cookbook Book Club -- July edition.
What started out as a 30 Minute Meal theme cooking together in the
kitchen of the Catholic Church
turned into a pre-prepared "Picnic" Fare
At a Shelter House in Gunn Park!

Because . . .
Rhonda, the hostess, was able to secure an air-conditioned shelter house at the Park.
We changed from cooking together 30 Minute Meals to Picnic Fare
(for we are not a "make ahead" type of group and we could adjust to Picnic Fare quite easily)
(In fact no one brought their 30 Minute Meal Dish!)

It was a wonderful meal (as it always is)
And we had a grand time sitting at the picnic tables in Gunn Park's Shelter House
eating our Plan D menu! 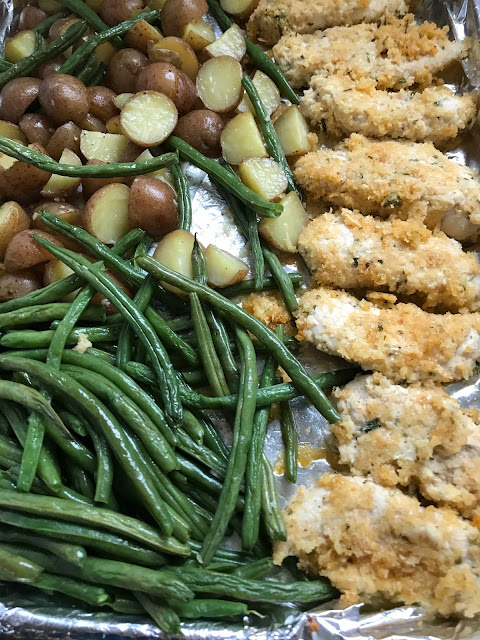 A "sheet pan dinner" -- she does that often because it's simple and good.
She's not made this one before
It's a Pioneer Woman recipe and we all thought it quite tasty.
(The good thing about sheet pan dinners is that you throw away the foil, wipe the pan and you're done!)
It's chicken tenders (she did tenders rather than breasts because we always have too much food), rolled in crumbs and cheese and lemon with potatoes and beans

Michelle, was our "over achiever" -- bringing two salads 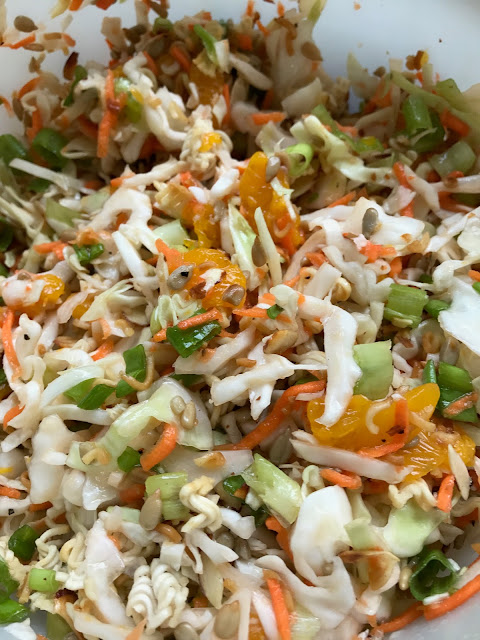 The ramen noodle coleslaw with a twist -- mandarin oranges
It was good! 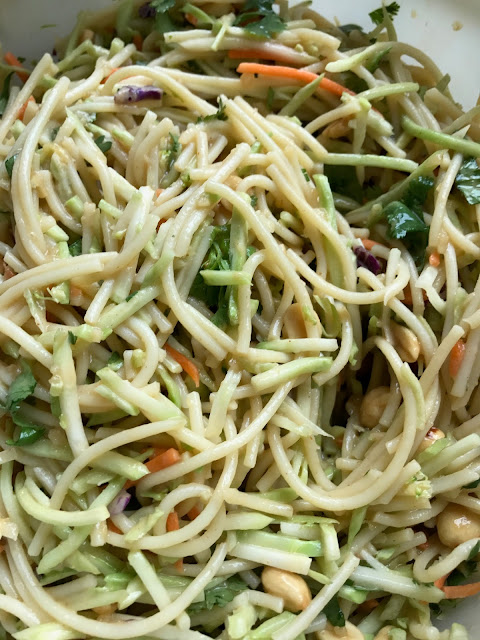 And an Asian peanut dressed pasta salad
We all liked it and thought it would be good in spring roll wrappers with a bit of chicken added and additional dressing to use as a dipping sauce. 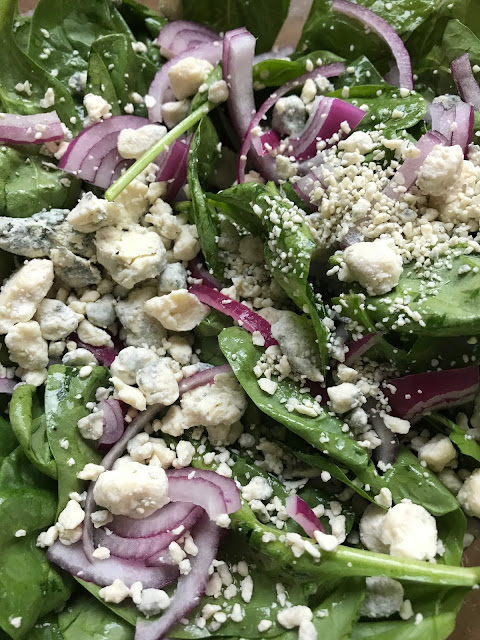 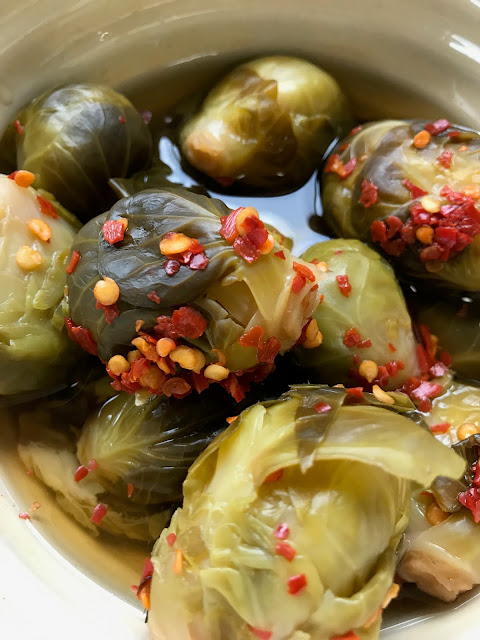 My contribution was the hot pickled Brussels sprouts.
Not a recipe but from a jar because now my kitchen is getting new grout and I'm bound from
the kitchen until it cures.    I was going to do a pickled vegetable . . . actually, carrots.
This is a good product, available at our local G and W store and I would buy them again --
they're quite spicy! 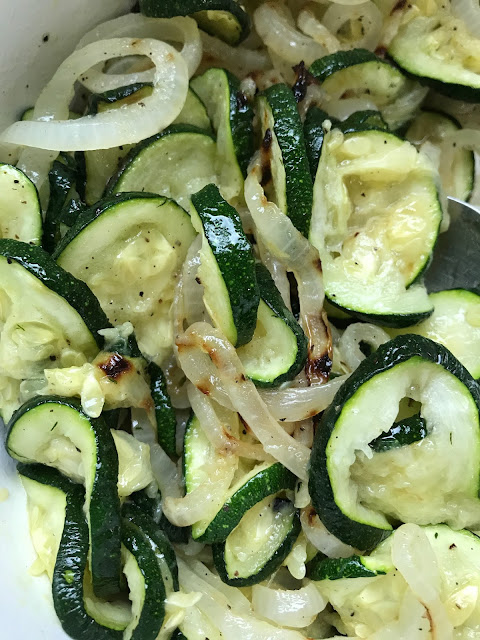 Sara's zucchini and onions.    A Jacque Pepin dish which she felt a failure.
None of us did!     It was quite good.   And good picnic fare because it can be served at room temperature. 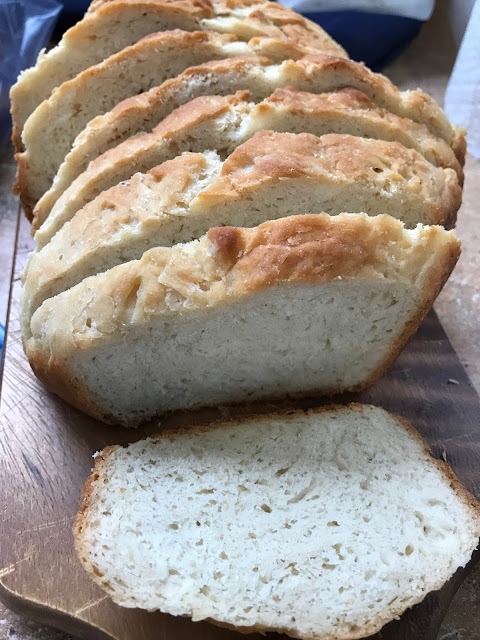 Rita had bread this month and brought "bread in a sack".    It's a yeast bread, really good, and one that I will definitely make.    An easy way to make homemade bread.
As Rita said, as easy as making it in the bread machine! 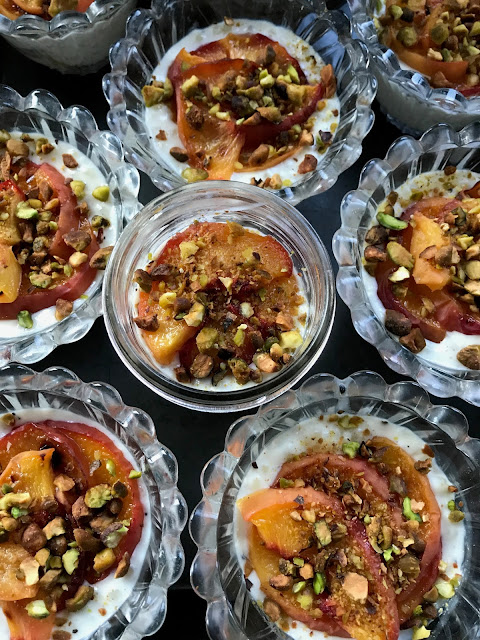 The prettiest picture goes to Angela for her tapioca dessert topped with roasted peaches and pistachio nuts.     Not only pretty but tasty.     Angela had never made tapioca before.    It was good with the hint of cardamon in the pudding. 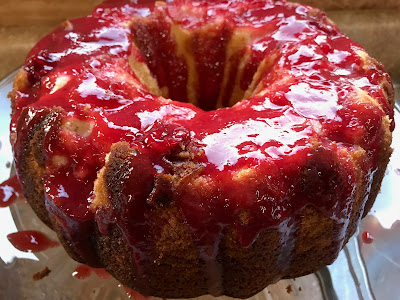 Gabrielle brought our other dessert.    Gabrielle admitted to not being a cake baker (she leaves baking cakes to husband Brian) and so to challenge herself she chose a cake.    It's a Whiskey Sour Cake and you could taste all the elements of a whisky sour in the cake.     She thought it a bit dry but none of us did -- we all thought it was delicious!

Considering we were on Plan D by the time we got to the Shelter House, we had a
grand time (as we always do)
And we're planning on cooking together next month --
We'll make pizza!
Each one of us will bring a pizza or pizza type dish -
And like always, it has to be something we've never done before
(although we'll allow tried and true dough!)
And I don't think pizza night will evolve into Plan D because . . .
* the floor at the Catholic church is refinished and school has started
*my church painting will be done and pre-school will have started
*chances of a funeral at the Presbyterian church are unlikely!
It will be nice to have a Plan A evening!

We have learned and have grown because of the club
And have eaten things we've never thought we would eat
For we try everything -- even if we've avoided that particular item our entire adult life!
(Rhonda and the Brussels Sprouts)

We're looking forward to our pizza night!
Posted by Martha at 10:10 AM

Your group is not only creative and clever, but also flexible and adaptable! This meal looks amazing!

I can't imagine anything I would rather do than have a group of friends like that. Cooking in the Church kitchen all together, would bring me back to the days all the women in my family got together to wash the dishes at big family dinners. I just went through a mental list and couldn't come up with any friends that aren't working and their weekends are spent catching up with chores and grocery shopping to get ready for the next week. But, I am so inspired and you gave me a good idea. Thank you for sharing this with us.
~Ginene

That sounds like such fun - and what a great meal! It's been so hot lately, I'd be happy to be banned from my kitchen for a spell!