In a flea market, a long time ago 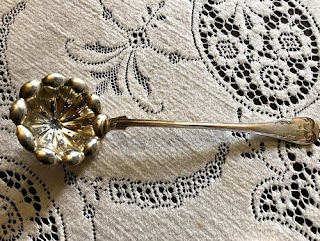 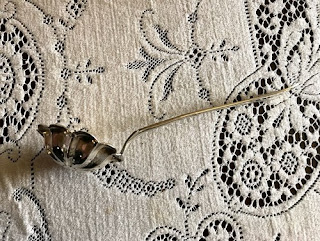 And a bowl that's perfect for a spoonful of peas! 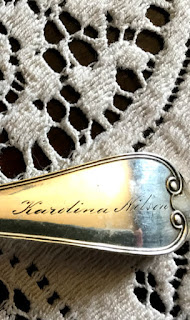 After many guesses
(including a sugar sifter -- I didn't think so, but I did try to
sift sugar with it -- the holes are too small)

Someone finally came up with the notion that it was a
"tea" strainer or a "tea" spoon!
(I had 2 of the three letters right --
except it was a T rather than a P)

This afternoon, I decided to use it for
tea 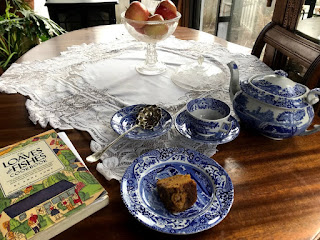 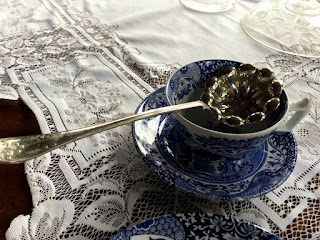 It does fit perfectly not the cup 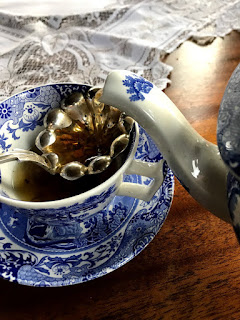 I'm convinced that that's what Karolina's spoon is --
a tea strainer!

But there is a second puzzlement: 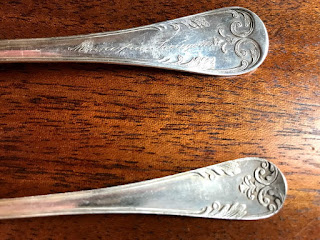 I don't have twins -- the one on the bottom is a tea spoon
(an afternoon tea spoon, a 5 o clock spoon)
I think it is the same design! 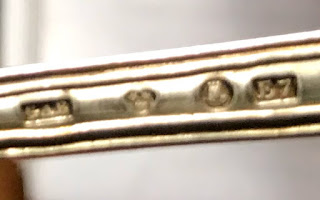 I got them at different times in different cities.
The small spoons first
(which also are engraved on the back -- with an "LR")

I wonder if Karolina had small spoons that matched her strainer?
Posted by Martha at 5:11 PM

It sure is pretty and could be used for many things! Elegant really!

Well, this is an interesting mystery. I don't think it is a tea caddy because it has no lip and the handle is too long. I think it is a mote spoon. That's why the holes are so tiny! I'm serious, really. I believe that spoon was for lifting motes out of one's cup. It's a real thing.