It wasn't my suggestion --
the group decided to do a "Betty Crocker" Cookbook Night
And I volunteered to Host
We do, after all, have a close personal relationship with
"Betty" 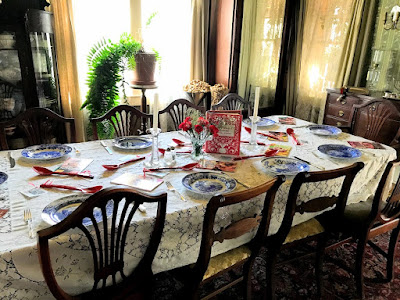 In the dining room
A tablecloth, real dishes, cutlery 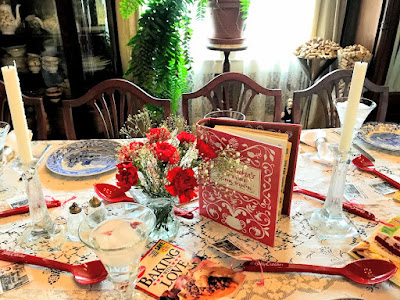 A centerpiece should include flowers and ours did -- red carnations 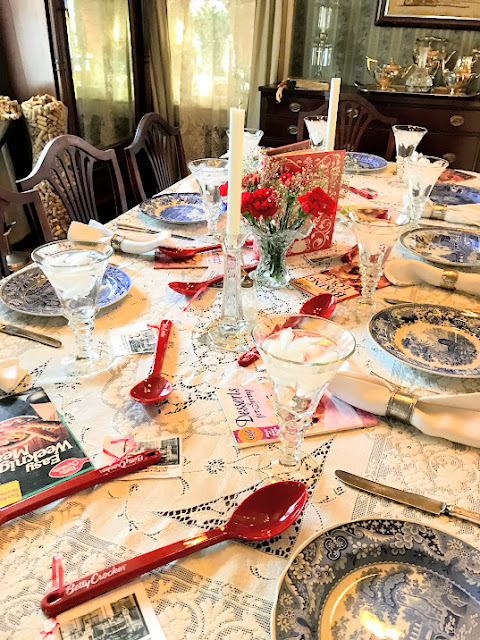 We chose our Spode Blue Room, Jim's Grandmother's cutlery, damask napkins in silver rings
And our Quaker Lace tablecloth
Betty would be pleased! 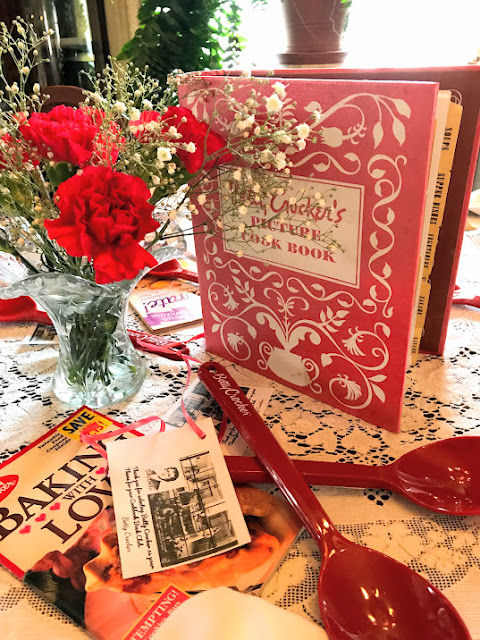 Not an original but a reprint of the 1950 "Picture Cookbook"
which revolutionized cookbooks
(a gift from Daughter Sarah)
The red carnations, cookbooks and spoons

Why spoons?    Why red spoons?
For more than 60 years, that red spoon is one of the world's most recognized logos, found on Betty Crocker products such as cake mixes, frostings, cookie mixes, meals . . .

In 1954, they reasoned that putting Betty's image on the package wasn't realistic.
So what image could convey:   "kitchen helper", "warm and friendly" and "reliable guide"?
A red spoon it was determined! 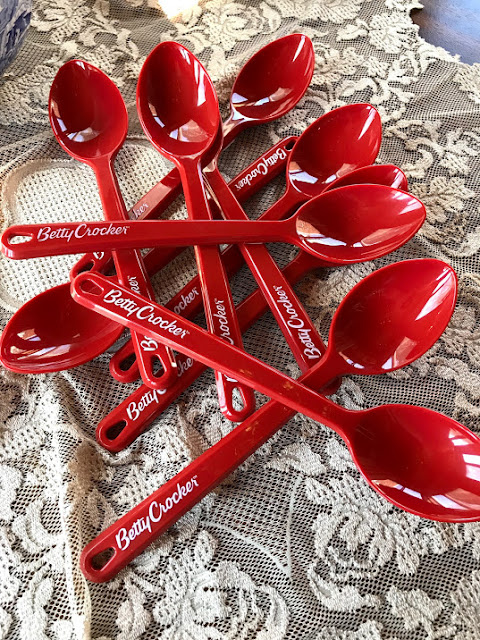 When Betty Crocker herself heard that we were having a "Betty Crocker" night
for our cookbook club, she sent one of her iconic red spoons for each guest! 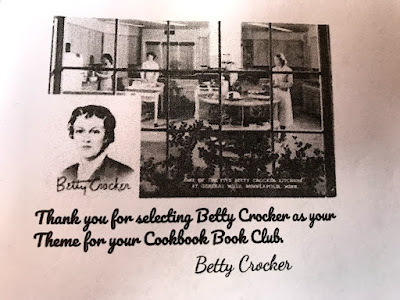 Along with the above tag.

One of the caveats of this Cookbook Book Club Night was that you were to bring the Betty Crocker cookbook that you got the recipe from: 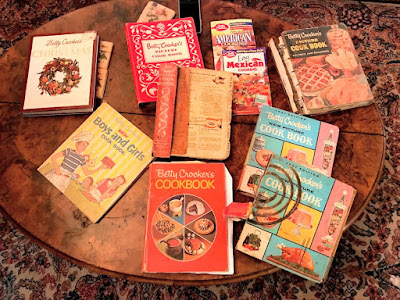 All of our cookbooks on the living room coffee table.
Old, old cookbooks.    Beloved Cookbooks.    Much used cookbooks .
Cookbooks that had no cover from constant use.
Cookbooks that had the "scar" of being put on a hot burner
From two original Red and White Betty Crocker Picture Cookbook (one of which was a wedding present from her mother's co-workers when her mother got married in the 50s) , to a children's cookbook that one member received as a gift from her grandmother at age 8, to a grandmother's treasured cookbook 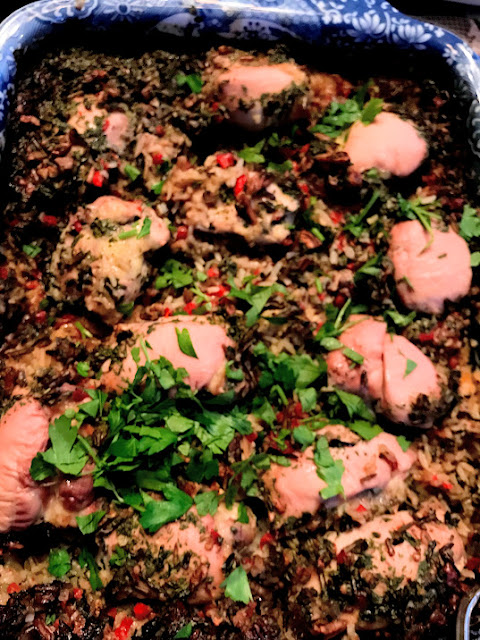 In a square baking dish, mix rice and packet mix with pimento and pecans.    Pour orange juice over all and top with chicken breasts.      Bake at 350 for 45 minutes.     Sprinkle with parsley to serve 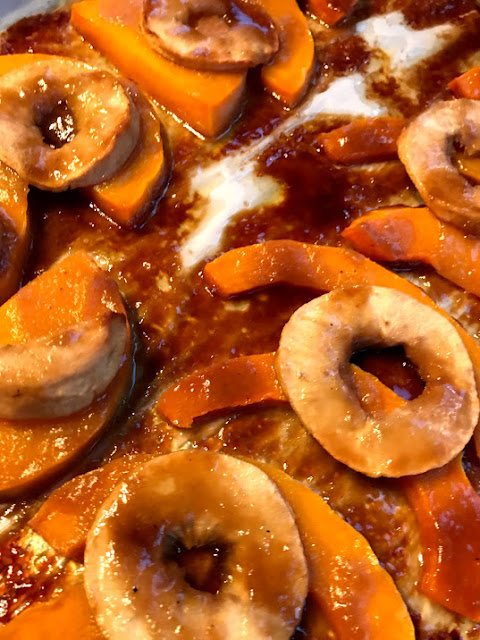 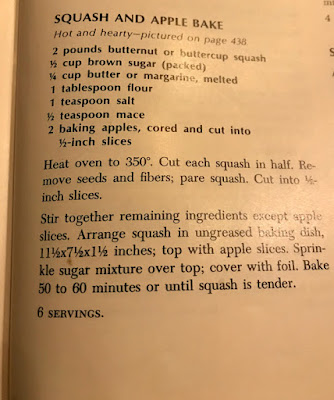 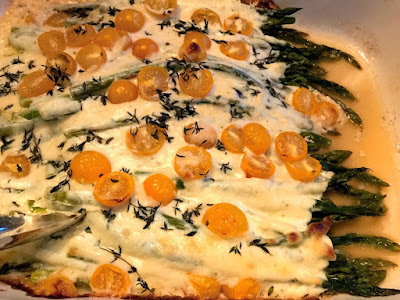 Angela's recipe was from the internet
Creamy Garlic Asparagus Bake 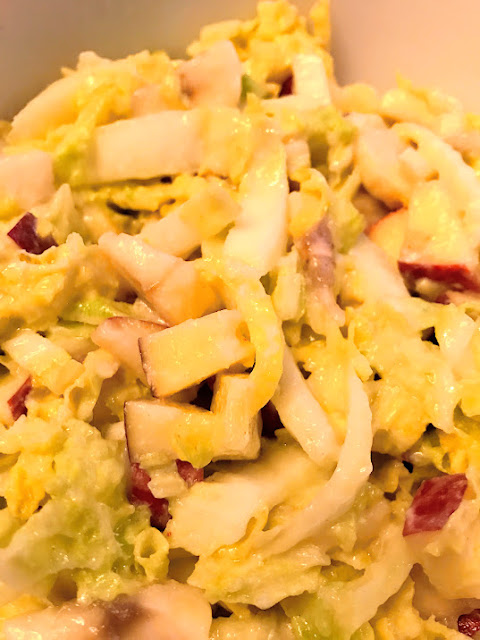 Barbara brought a cabbage salad from the
Original Betty Crocker Picture Cookbook
Salads, she said, were not as plentiful in the 50s as they are now
It was dressed with cooked (boiled) dressing
(which I've always wondered about -- I will say it was delicious and now
I am eager to make a dish with it -- thank you Barbara!) 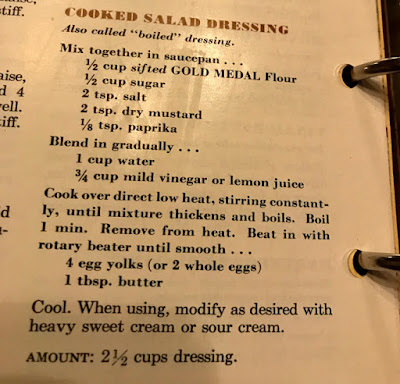 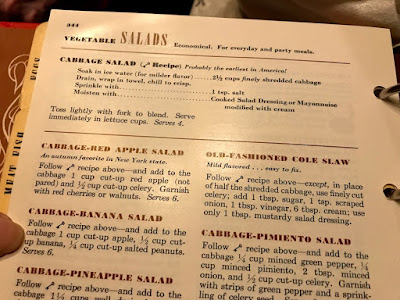 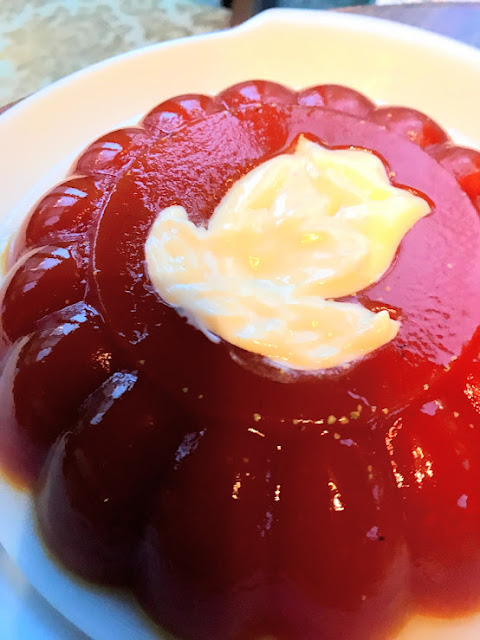 Michelle didn't own a Betty Crocker cookbook but found the third edition of Betty Crocker's Picture Cookbook  at a used book store (and if you saw Michelle's collection of cookbooks you would wonder why Betty was not represented!    However, she remedied that and bought three!)
Michelle had never made a molded gelatin salad (although she had owned a Tupperware salad mold "forever") nor had she made mayonnaise.
This was a delicious recipe and the tangy tomato was a nice compliment to our meal! 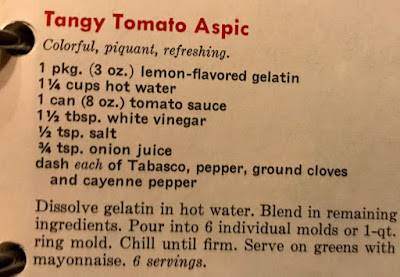 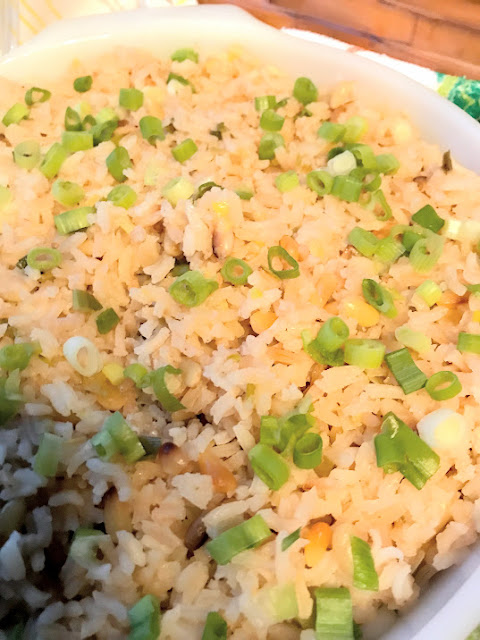 Donna's "starch" was a rice dish -- from one of those pamphlet cookbooks that are at the checkout aisle.    Easy Mexican Cooking.     It was delicious and went with our non-Mexican meal but we all felt that it would make a Mexican meal extra special to serve this rice dish with tacos or an enchilada casserole. 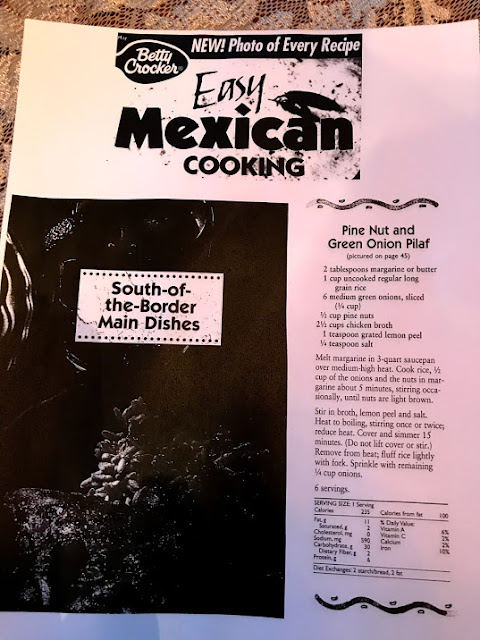 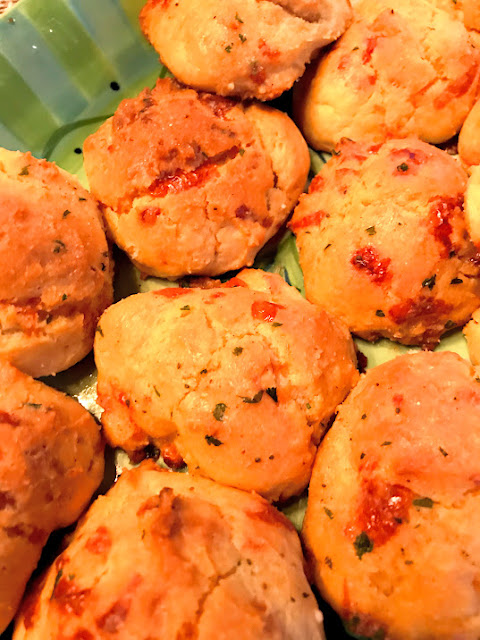 Rhonda brought easy Buttery Cheese biscuits (correctly named Cheddar Biscuits with Old Bay Seasoning). .     Not her original plan for her original plan was "From Scratch Biscuits" from her mother's much loved original Betty Crocker Picture Cookbook
but after having to deal with a 12 foot trench after her work day ended, her time was limited . . . so she found these on the internet 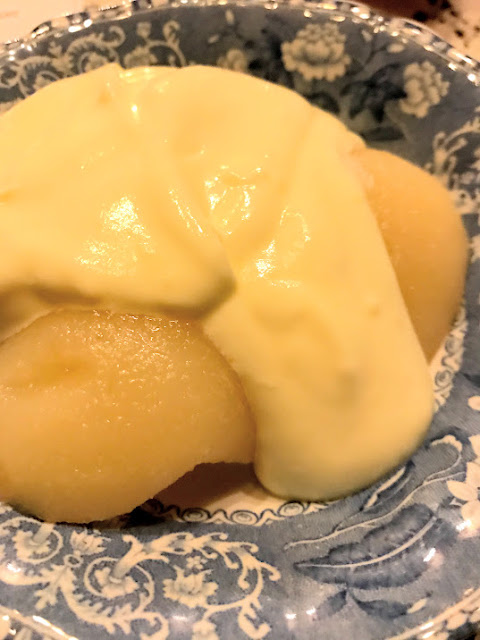 When Liz graduated from Nursing School, she knew that she had to learn to quick and so bought Betty Crocker's Quick and Easy Cookbook.    It is much beloved and instead of the spiral book that she originally bought, it was so loved that she had to take it apart, put each page into a plastic sleeve and put those sleeves into a 3 ring binder.
Because it's from Betty Crocker's Quick and Easy Cookbook -- it is quick (canned pears) and easy (the lemon topping).     She told us the recipe and, of course, I thought I would remember but I didn't. I do know that it was made with lemon pudding and whipped cream and lemon zest and a soupçon of powdered sugar but I forgot the proportions.
It was delicious!
And a dessert that our mother's might have served to the Bridge Club ladies! 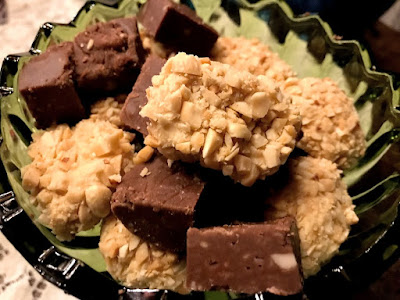 Chocolate Fudge and Peanut Butter Creams.     Brought by Sara.
From the cookbook, Betty Crocker's Boys and Girls Cookbook.   The cookbook was
given to Sara by her grandmother when Sara was 8.    The copyright is 1950 so she thinks that he grandmother may have bought it used.     Sara wasn't 8 in 1950.   In fact she wasn't even born!
But she's treasured that cookbook for many years (for she's more than 3 times 8 years old now!)

It was a nice compliment after the pears and lemon sauce and we kept passing the compote around.    Taking another piece of fudge or one more peanut butter cream 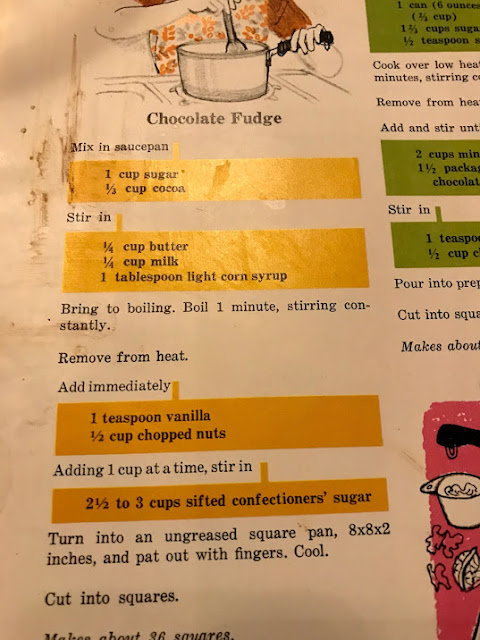 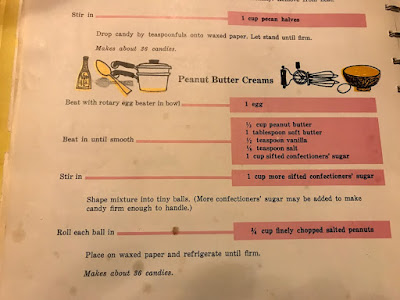 We always say each month that it was THE BEST!
And we certainly said that last night!

Before they left, the girls wanted to say:

As far as I am concerned - you all deserve a trophy! What a wonderful meal and such variety and interesting items! Great success!

What a fun and delicious evening!! This sounds like a great way to try some new/old recipes at one time.

This is so special! I love seeing your beloved cookbooks and appreaciate that you included all the recipes. It sounds like your group has a great time together. Thanks for sharing your ventures. Also, I enjoy seeing your table settings - always so lovely!
(Our youth group toured Betty Crocker headquarters in Minneapolis in 1973, when I was 13. Each of us received the large red spoon. I was so excited to add it to my hope chest.)

I think that is so cool that Betty Crocker sent you red spoons to commemorate your Betty Crocker Luncheon. My first cookbook given to me for a wedding present is still used today and is one of my favorites.