Sara was the hostess in April and her choice:

But we accepted the challenge
And that is another purpose of the Cookbook Book Club --
to challenge us in the kitchen! 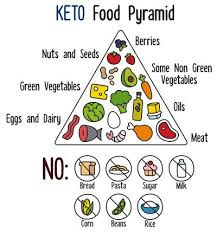 And as we said at the end of the evening,
we had one of the best meals that we've ever had
at the Cookbook Book Club

We started with appetizers 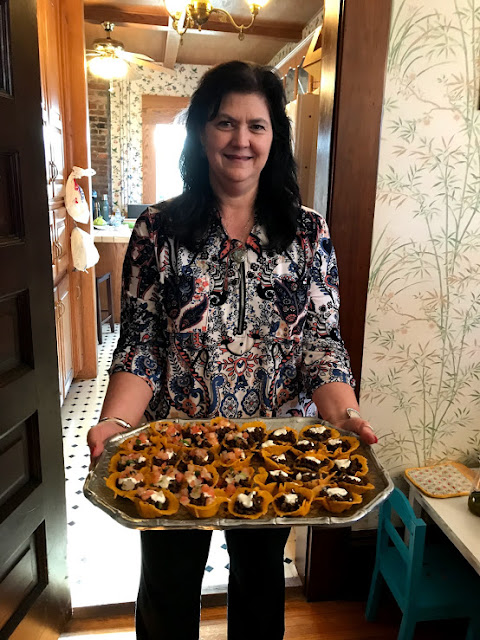 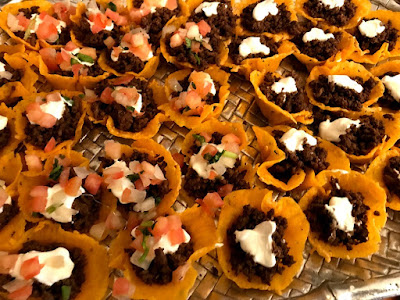 We all adored them!
They were good  and completely Keto! 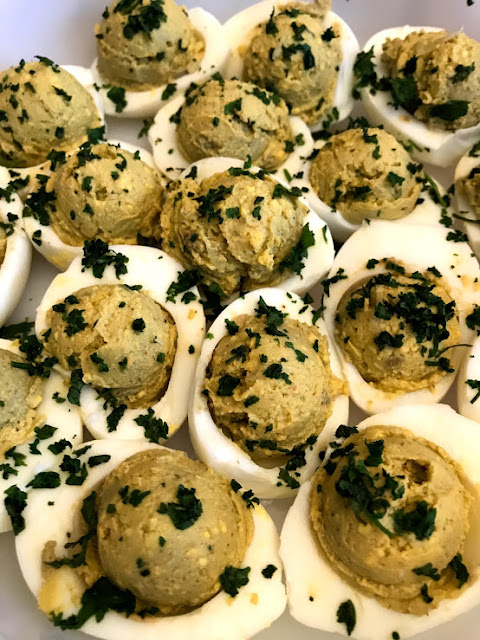 Avocado stuffed eggs.    We all thought they were good and that the avocado filling was very good . . .
Rhonda had a hard challenge this month --
How in the heck do you do a "starch" when the theme is Keto? 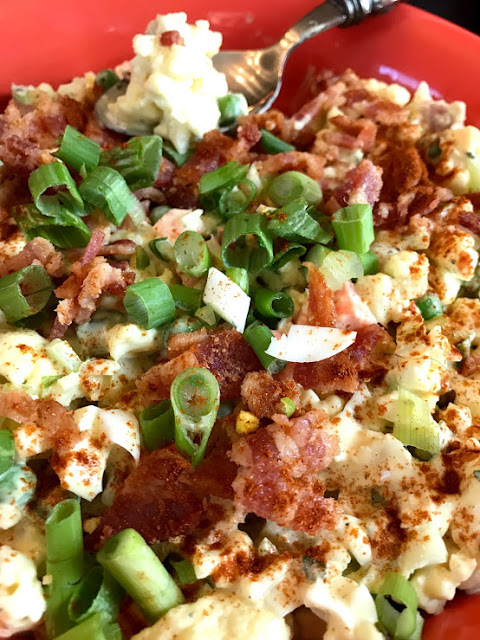 She did as a lot of Keto dieters do -- she made "potato" salad with cauliflower.
We all liked it and Rhonda said that she would definitely make it again!

A challenge of another sort: 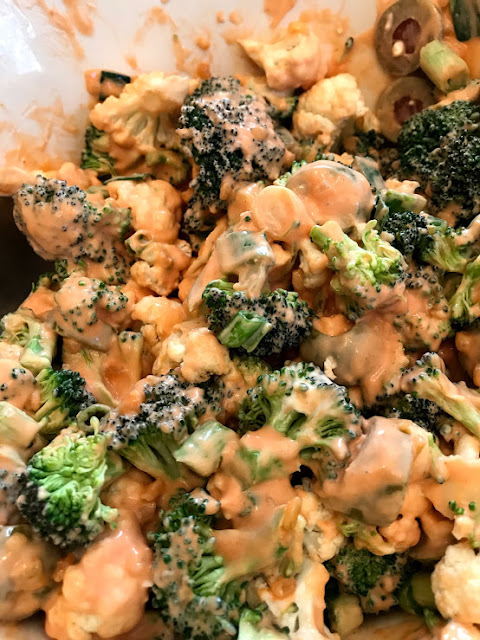 I had salads.    Salads mostly being "keto", I decided to take an old favorite non-keto recipe
and make it keto!
An old tried and true -- broccoli cauliflower salad with green onions and green olives and a dressing made with Mayo and Ott's dressing
Ott's if full of sugar so I made a keto approved version.
I thought the "keto" salad tasted as good as the non-keto versions that I've made
for the last 40 years! 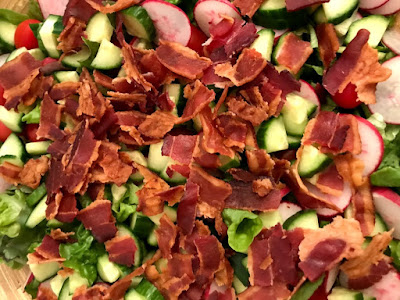 Liz had a salad as well and chose a tossed sald with all kinds of vegetables, topped with bacon and the most amazing basil dressing that I've ever had 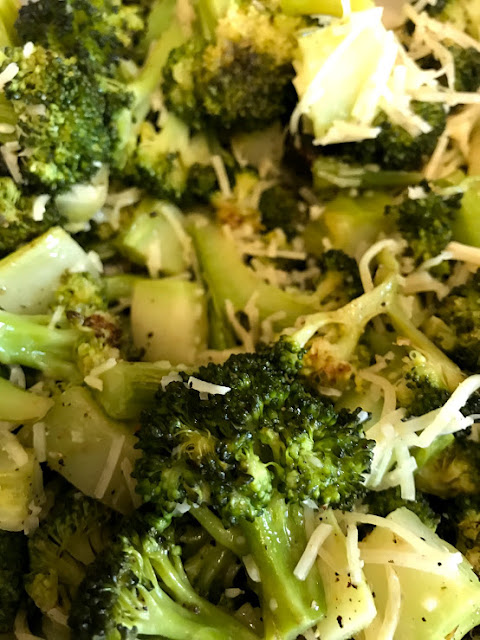 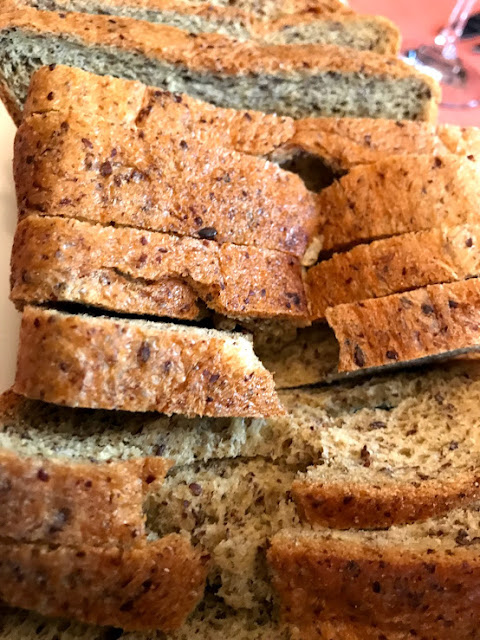 Rita is our bread baker and you know that whenever she has bread, you're in for a treat.     She had a challenge this month, however, as bread is not really one of the keto approved foods.     She found a recipe and made the most amazing bread.    You would never know that it was "lo carb".
But then she's always been a magician with yeast and flour!
(It was so good that I ate two pieces!) 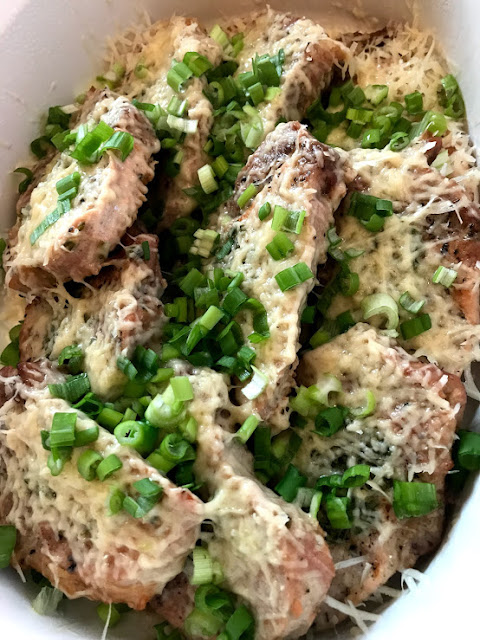 The hostess always provides the main course and Sara did a wonderful pork chop dish for us topped with green onion and Parmesan cheese.     She couldn't have picked a better entree had she known what we all were bringing! 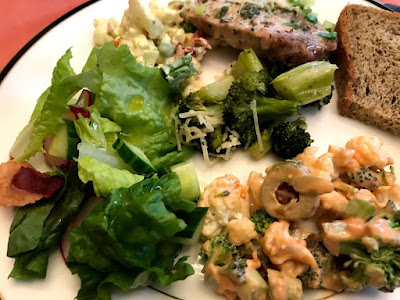 It was a nice well-balanced plate of food
And it was delicious
Some of us even had seconds for it was really good! 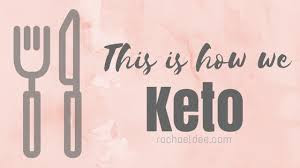 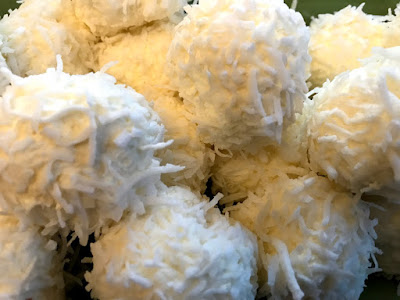 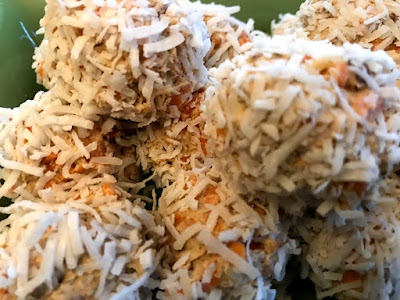 Carrot cake balls -- carrots, cream cheese and coconut
Although there wasn't any "cake" in these balls.
Belynda did a great job with these two desserts. 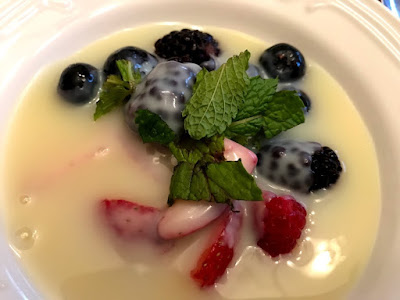 Angela was the other dessert person and she brought almost frozen berries
and white chocolate "soup" -- Oh, my was that ever good.    I thought I saw several of our group eyeing the bowl of soup and wondering if they could just go to a corner and finish it!

It was a fun time -- as it always is
And we're eager for next month when Angela will host
and the theme is Jamie Oliver!
Posted by Martha at 4:16 PM

I started a modified version of this way of eating last July. I have been able to stick to it and enjoy it and the payoff has been 11 pounds, solidly gone. I never ever feel deprived or challenged. What a great idea for your cookbook club!

Could you please direct us to the bread recipe.....I am diabetic and perhaps it would be "legal" for me. Many thanks.