That we changed our citizenship . . . 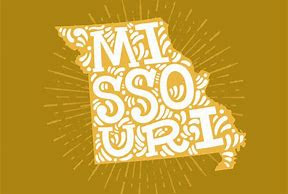 Both Husband Jim and I were born and raised in Missouri
(Kansas City to be exact)
and I'd never lived anywhere else.

Even though Kansas City spans two states
(Missouri and Kansas) 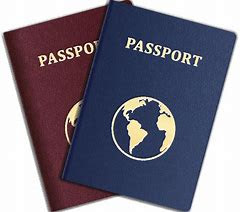 I thought to live in another state you had to have a passport! 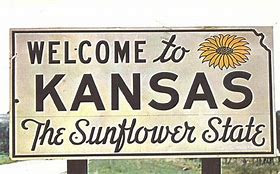 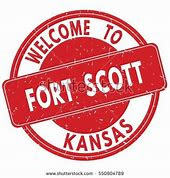 Fort Scott, Kansas to be exact
Which was only 20 miles from where we lived in Missouri
It wasn't like we had to trek half way across the country --
we really only moved 20 miles!

The move happened because Husband Jim's employer
wanted us to move.
I didn't want to --
especially to Kansas

But one blustery day in March (a Tuesday to be exact)
on his way to work, Jim happened to see a for sale sign

It was the only house we looked at!
We made an offer, it was accepted

And because we had been to England a year earlier and had fallen in love with the fact that houses had names rather than addresses, we decided this house had the same charm that those
English cottages had and needed a name! 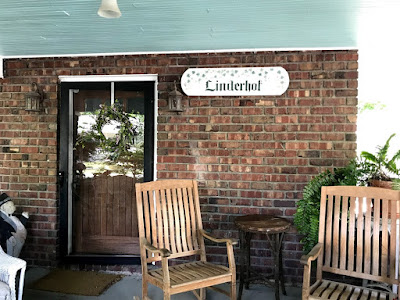 At Husband Jim's suggestion, we named it Linderhof
for the builder was of German descent as was I.

And that calls for a celebration! 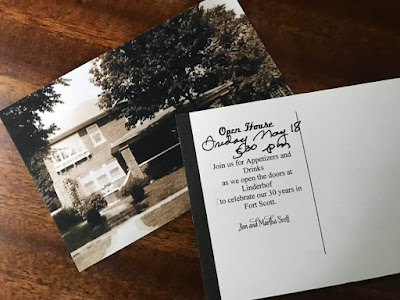 Using the 1924 photo, we made postcard invitations and mailed out a goodly number

We don't like to do things the easy way . . .
We were in Minnesota for Mother's Day and arrived home Tuesday night
The party was Friday --
Three days to put a party together! 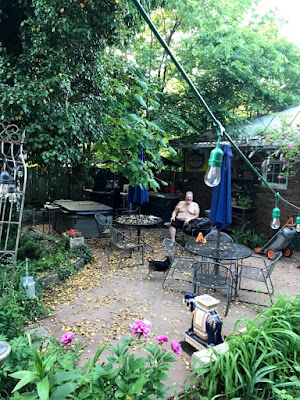 Jim was in charge of the patio and setting up drink 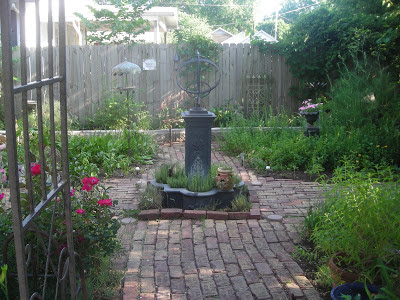 We got it all done in three days --

The weedy needy garden was made presentable
(and received many compliments)
The house was clean
The patio and drive were made leaf free
and Jim set up the bar with wine, spirits and beer 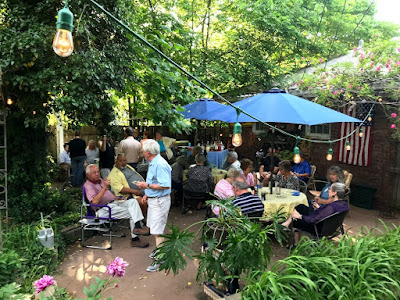 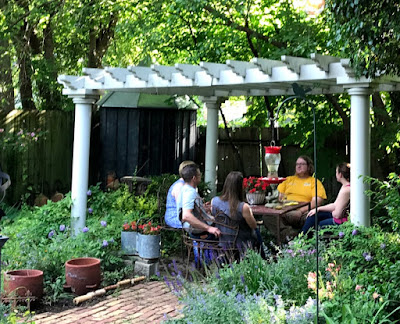 And then off in the corner were the Pergola People!

It was a perfect evening --
Not too warm, no rain, no bugs
The drink flowed
And the food was in the dining room 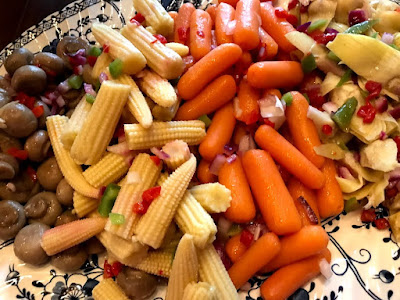 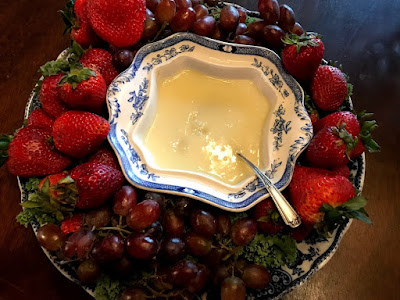 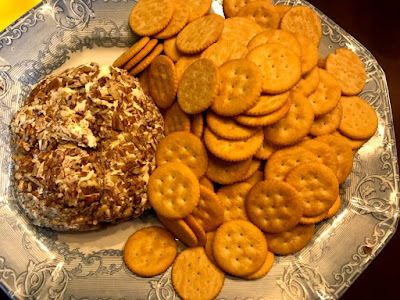 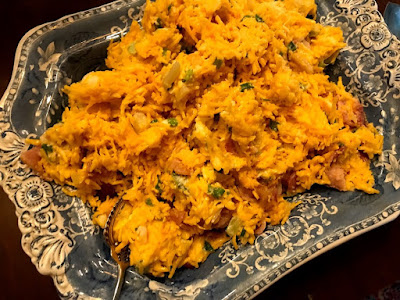 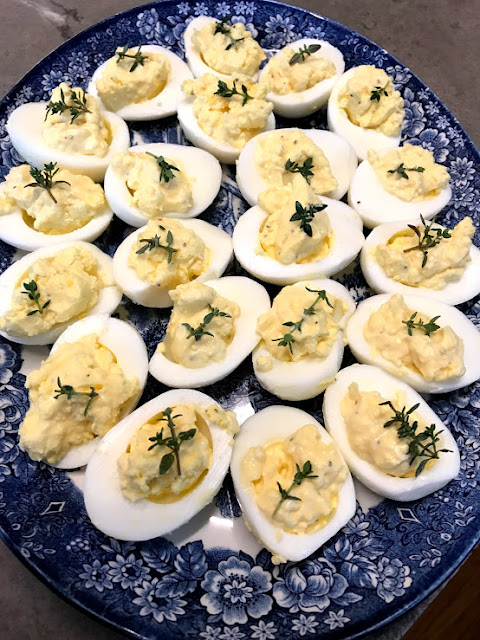 Oh, and meatballs, we can't forget the meatballs even though I forgot to take a picture of them! 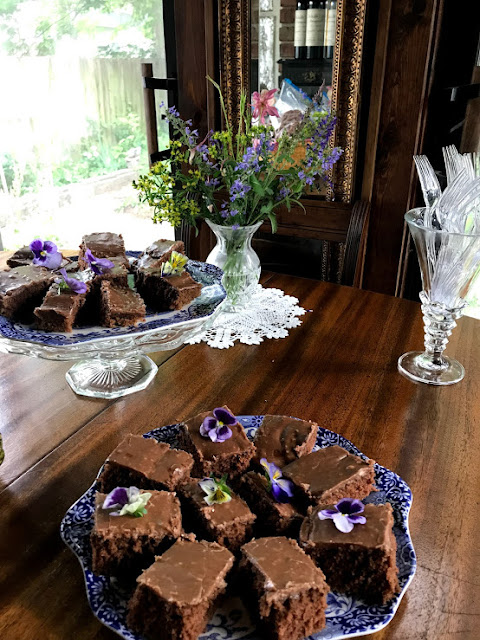 Dessert was served in the breakfast room 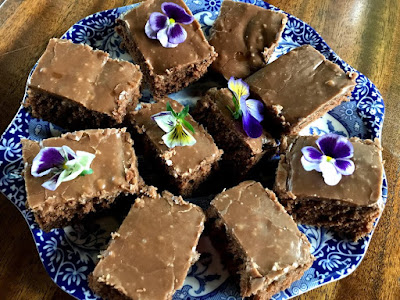 Texas Sheet Cake
A classic recipe but a good one
For crowds, it is my go-to chocolate cake recipe
And the good news is that it feeds a crowd.

We were happy to share our home of 30 years with our friends as we celebrated
our 30 years in what we consider now our "adopted" home town. 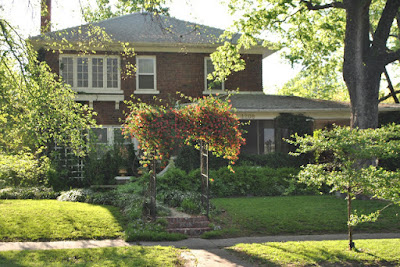 
Congrats on living 30 years on your lovely Linderhof and may you live many years more there. You threw a great party, lots of guests and the food looks delish. Wishing for a piece of that Texan Mud Cake too !
Blessings.
Fabby

Love your home, and I too have lived in my house for a long time. Your food looks delicious, and everything on the patio looks great. Happy memories.
Joyously,
Betty

Congratulations! Your home is beautiful and so is your hospitality!

Sorry, but once I saw the exposed man boobs, I don't remember anything else.

Lovely, lovely, lovely! A magical garden filled with good friends and good food is a fitting tribute to your life at Linderhof.

What a wonderful was to celebrate 30 years of happy living! I don’t think I could have pulled an event like that in 3 days but you did a fabulous job. Here’s wishing you two many more happy years in Fort Scott!

Such a lovely party! Was your house built in 1924? Friends of ours threw a birthday party for their home last year as it had attained 100 years of age. They're a young couple and haven't lived there as long as you've enjoyed Linderhof. Thanks for sharing your home with us over the years! Barbara in St Paul

Barbara -- we just got back from Minneapolis -- our daughter and family live in Excelsior.

Hi Martha -
Fort Scott is lucky to have you! I can imagine your friends and neighbors would have a hard time letting you go if you ever decided to move. :)

I've been wanting to contact you. I know you are a fan of the Clock Tower Bakery in O.P. Wondering if you've had a chance to visit since the new owner took over? If not and you're interested, I would love to meet you there sometime for afternoon tea. I'm from the ATAA group and living in Manila, but am in the U.S., in Olathe until the end of July.

Connie -- I so would! I've not been since the new owners have taken over but I'm anxious to try it and their afternoon tea is a true English afternoon tea! It IS a bakery but you know I had several afternoon teas when I was in England and not all were in fancy places. When would you be available to go? I've got some June dates that I can't -- June 7, June 11, June 18, June 25, June 20 and June 28 -- but could any other weekday. My email is linderhof1208@gmail.com