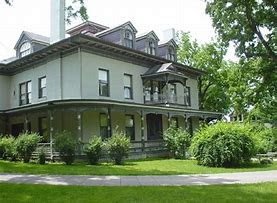 Bingham-Waggoner Estate
A historical site located in Independence, Missouri
where once both George Caleb Bingham lived
as did the Waggoner family -- who partnered with George Gates
(whose granddaughter was Bess Truman) and formed the Waggoner Gates Milling Company
Queen of the Pantry Flour
was their well known brand

It's called Breakfast and Blooms 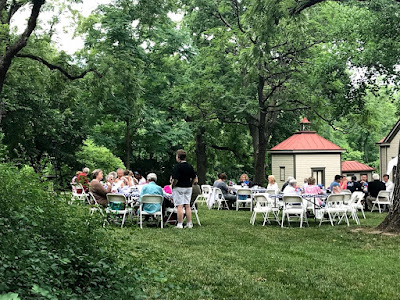 And on the lawn on the house, we ate breakfast 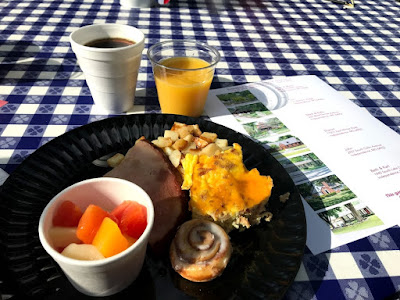 Egg casserole, fruit cup, ham, hash browns, juice and cinnamon roll
We sat with a couple whose house was on the garden tour and had a
most delightful breakfast!
They were proud of their garden and we talked tour and gardens all through breakfast. 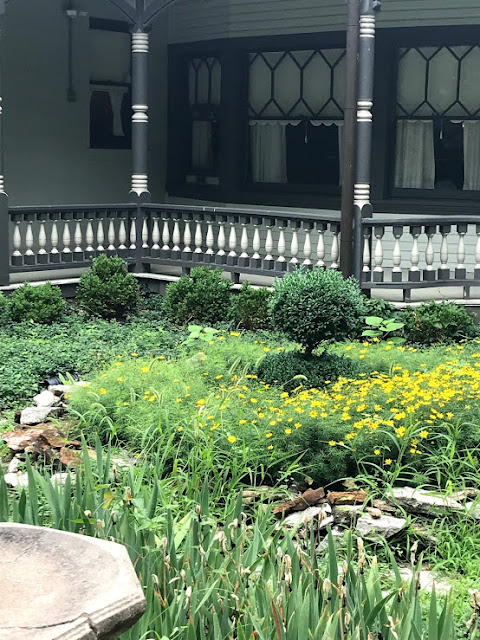 Our next garden was
Mark and Barb's
(our breakfast companions) 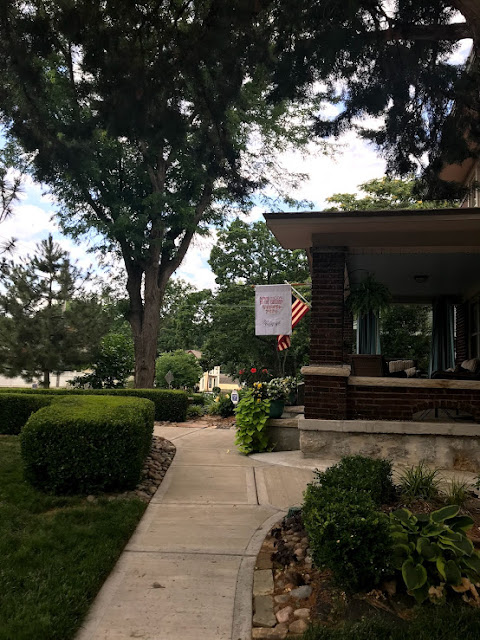 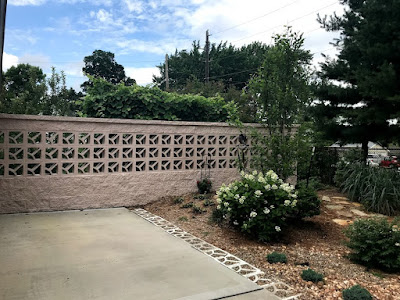 "THE" wall -- Barb told us the story about this wall.
When you exhaust all other methods for finding what you want,
drive by a house and there it is -- the material -- just laying on the ground
Go to the ask to inquire about it and get it for "free"!!!
It was a great story and a Great Wall! 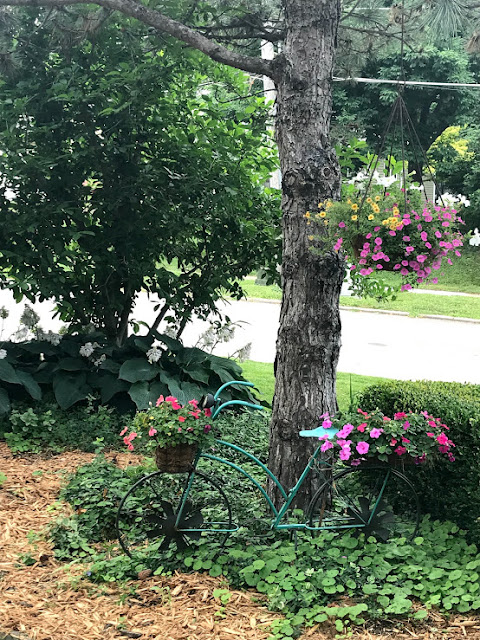 Loved the bicycle and the flowering basket in the tree 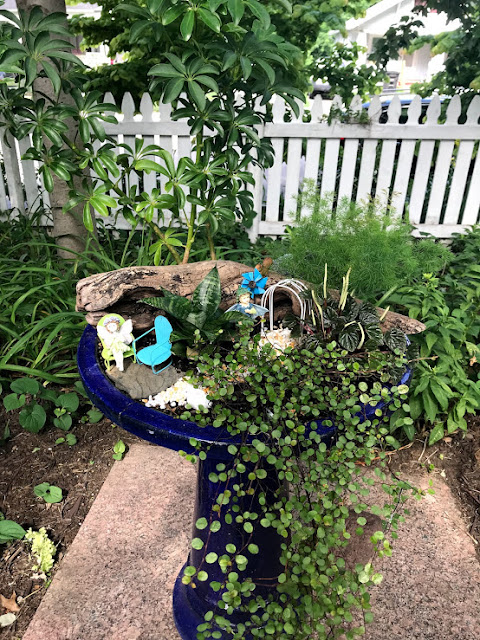 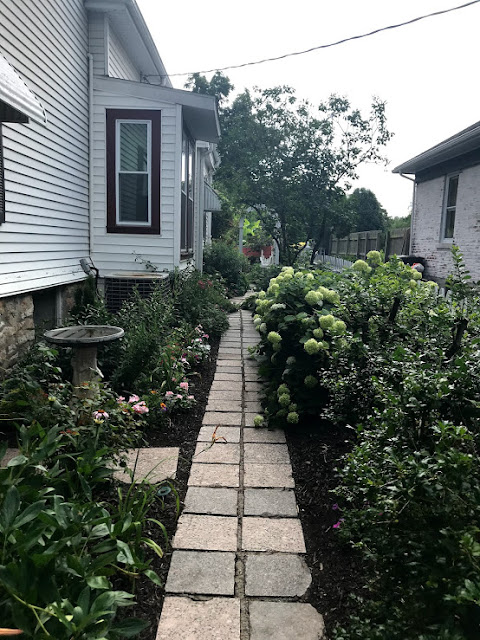 And a lovely garden along the side of the house.
Besides an abundance of flowers, they had a raised bed vegetable garden,
fruit (both trees and berries) and chickens!
Self-sufficiency on a city lot
(although it was a long city lot -- it looked like it went all the way through to the next street) 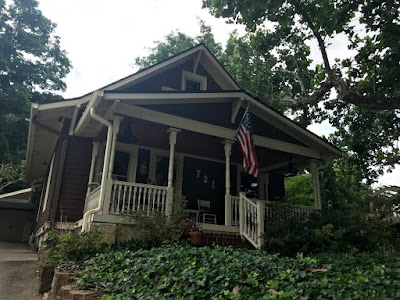 Ivy covered the hill in front of his hosue
No mowing! 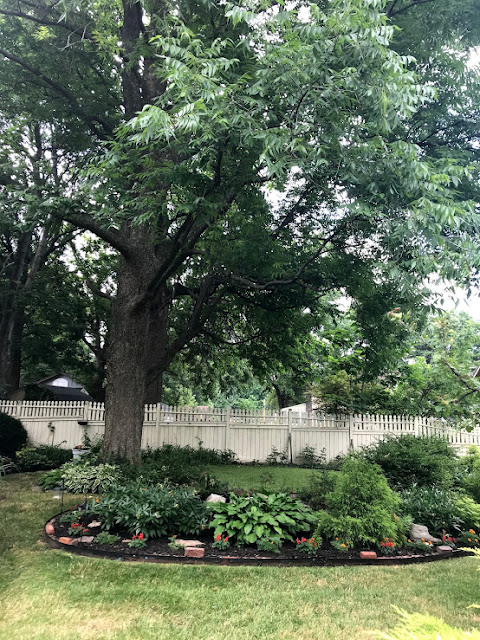 Magnificent trees in back surrounded by gardens
This is a pecan tree and the squirrels get them all, Sam said.
And they like to chatter and throw the shells down at him as he works in his garden! 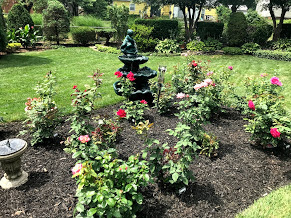 A parklike garden -- it was hard to tell where his property ended and his neighbor's began.
I'm thinking that with his neighbor's blessing, he tends gardens in more than his yard.
He's "Mr. No Mulch" either.
But not a weed to be seen.
John is an admirable gardener! 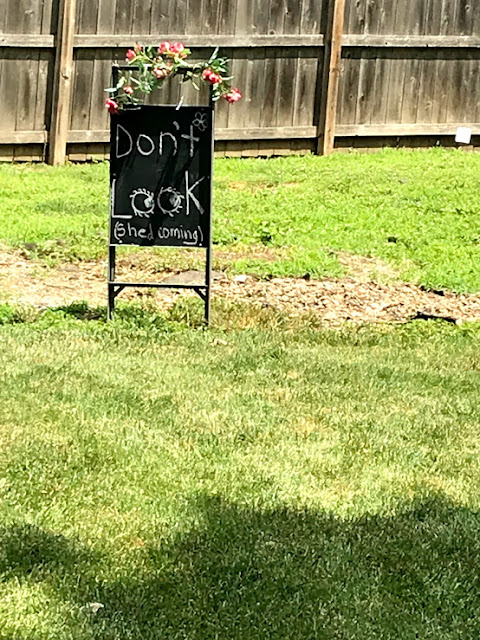 This was in their backyard.
I feel certain that they had hoped that the shed would have been built
in time for the tour and alas, it wasn't!
Thus, a sign! 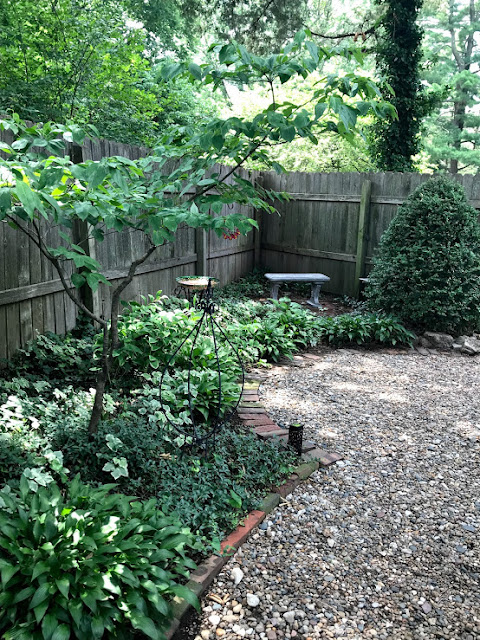 And in the corner of her mostly shade garden, a place of respite!

Clint and Aimee's garden was our last stop 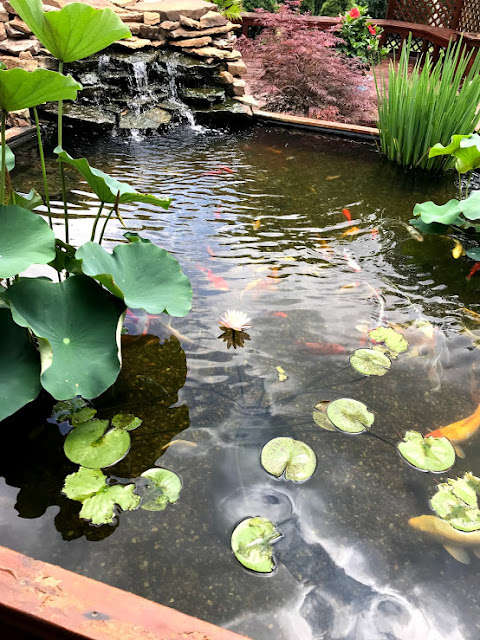 Clint has fish.    Koi -- BIG KOI
It was fun to sit with Clint on his back porch
and watch these fish!

It was a great tour.
Priscilla and I have penciled in the date for next year
We'll be back.

What a terrific garden tour. Thanks for sharing your visits! There are none in Columbia which is disappointing.

Yes, that looked like a terrific garden tour-- as was the one our Springfield Pink Dogwood Garden Club enjoyed in your town last summer, complete with lovely morning coffee and fabulous luncheon at Linderhof. Thank you again, Martha.