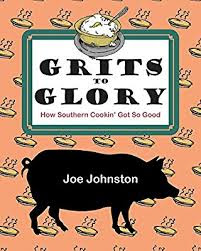 Grits to Glory
A book about the history of Southern Food
Not a cookbook! 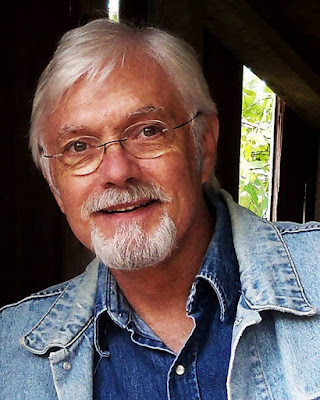 Joe Johnston
(whose other claim to fame is being part of the marketing team
that came up with McDonald's Happy Meal!)

Yesterday, Joe was in Nevada
at the Bushwhacker Museum
And not only did I get to meet him and hear his talk
But I got to cook and serve some Southern food
to the 50 plus guests attending his "lecture" 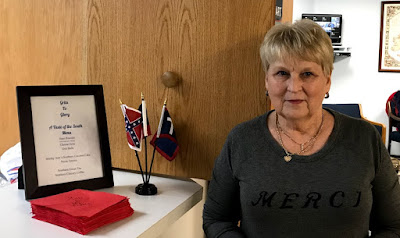 We said yes, eons ago and spent part of the summer coming up with a menu
after reading the book
Shirley Ann, however, is the Southern part of our duo
(although being raised in Missouri "Southern" food did make it's way to our table
often -- but I'm not the expert) 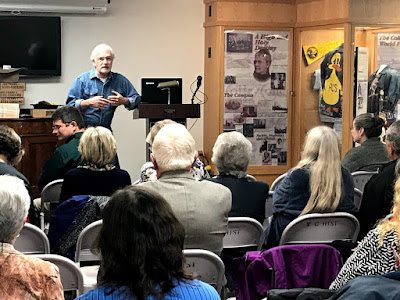 We got to hear Joe
he was an entertaining speaker
And there were door prizes
(like Lodge skillets and cookbooks)
Which, of course, I didn't win . . . I never do
But I'm used to that by now!

And after, we served a taste of the south to the attendees
of the program 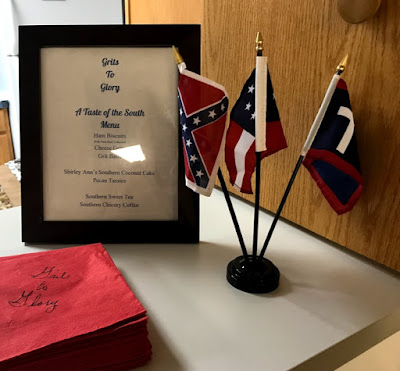 Shirley Ann and I divided up the duties
Each of us made two things
one sweet and one savory --
Mine were: 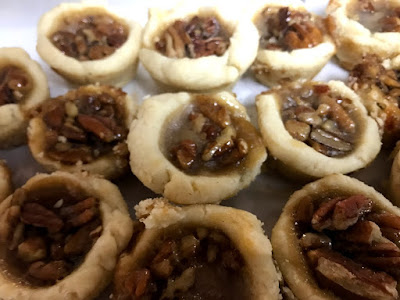 Pecan tassies
(Because pies were a big part of Southern cuisine and as everyone knows
if you go to an open house, a sip n see or a shower, pecan tassies always seem to be on the menu!) 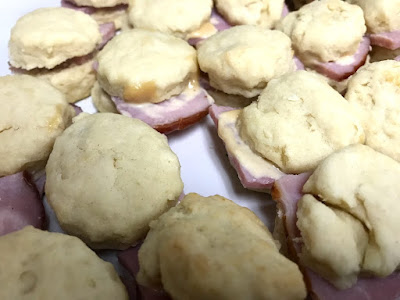 Ham biscuits
(because when you think of Southern food, the first thing you think of is biscuits --
the second is gravy!)
Mini biscuits filled with ham and spread with Aunt Ruie's mustard
(friend Sally's aunt's recipe) 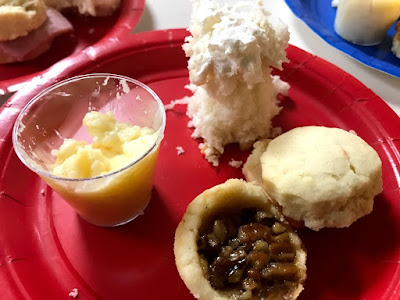 Shirley Ann made the smoked Gouda grits and the coconut cake.    Which complimented the tassies and the biscuits perfectly. 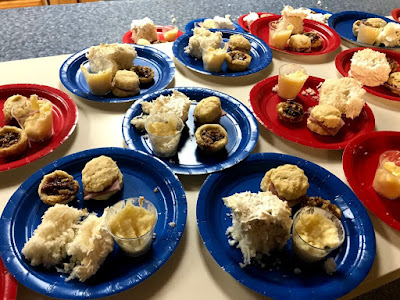 It wasn't a buffet but rather a plate with tastes of all four items.
And we had a big crowd!

We also served Southern sweet tea and Cafe Du Monde coffee
(for drinks had to be southern as well!)

And we had a handout of the recipes.

Many of our guests who swore they did not like grits came back for seconds --
but it is a superb cheesy grits recipe and the smoked gouda takes it over the top!

We made a few extras and so put out a platter with tassies and biscuits on it and gave seconds on the cocoanut cake. 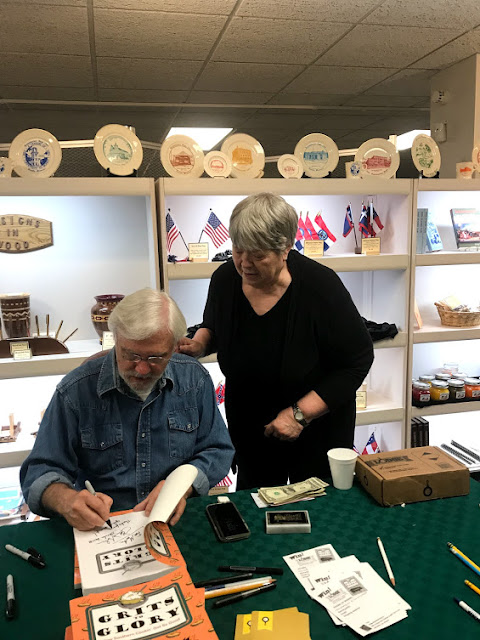 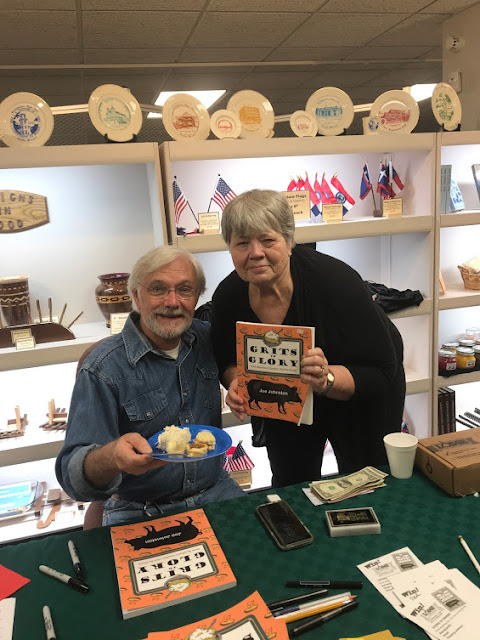 Me with my book and Joe with.a plate of Southern food!

I think Joe enjoyed Nevada's hospitality
and the crowd was certainly warm and welcoming!

Mix together until a soft dough is formed.     Pat out onto a cutting board and cut with biscuit cutter.   Place on uncreased cookie sheet and bake in a preheated 400 degree oven about 12 to 15 minutes.

heat 3/4 stick butter, 3 cups of milk and a good pinch of salt in a saucepan.   When it comes just to the boil add 3/4 cup quick cooking grits.    Stir constantly until it thickens.    Add cheese (the original recipe calls for gruyere but we like Smoked Gouda)    The original recipe calls for 4 ounces, I just put in what I like . . . and a dash or two of Tabasco and 1/2 t. garlic powder.      Pour into a buttered casserole.
Bake in a 350 oven for 15 to 30 minutes (until it's set)    If you want a brown crust you can run it under the broiler.

Put in refrigerator over night

When ready to serve mix l tube cool whip and 1 cup coconut (can add more to thicken) - mix well and put over top of cake.

In small bowl, beat butter and cream cheese until smooth; gradually beat in flour.    Refrigerate, covered 1 hour or until firm enough to roll.

Bake 20 - 25 minutes or until edges are golden and filling is puffed.    Cool in pans 2 minutes.   Remove to wire racks to cool.

What a fun thing for you and Shirley Ann to do, Martha! And a very well-chosen menu!

A very nice pic of you and Joe, Martha! I called Winston-Salem home for 8 years and have recently purchased another home in North Carolina. Definitely going to read his book. Thank you!

And I forgot to add in of Shirley Ann too!

Thanks for some other magnificent post. Where else could anyone get that type of information in such an ideal means of writing? I have a presentation subsequent week, and I am at the look for such information.
Ruby888