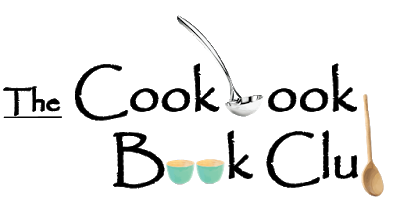 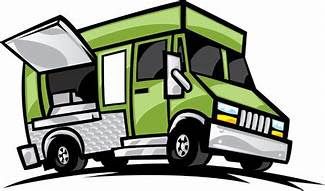 We met last night for our February meeting
Angela, our member who always thinks outside the box,
picked Food Truck Food!

Food Trucks don't actually abound in our little town.
There are some that come for our summer festival
but they tend to be BBQ trucks or funnel cake trucks
not "food trucks" as they've come to be redefined!

But, as we always say, this was just

We started with an appetizer: 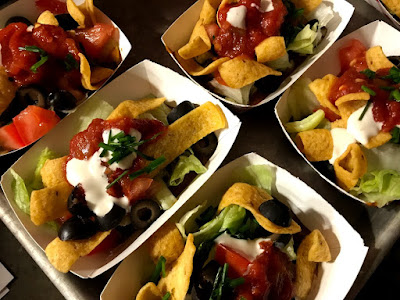 Rita
brought Mexican Haystacks
Think the "Walking Tacos" kicked up a notch
They were yummy! 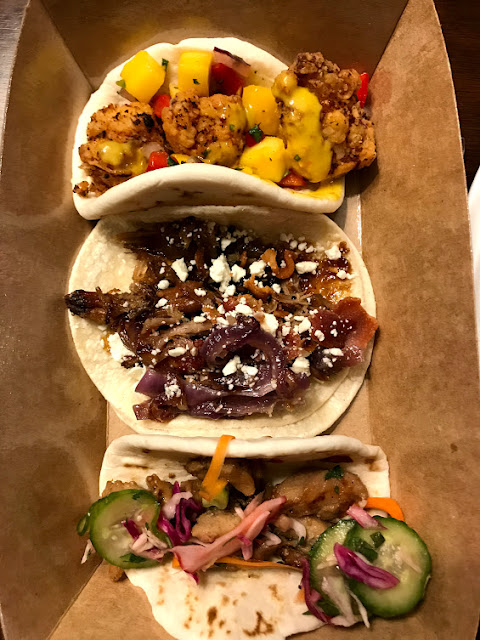 Angela
Fixed tacos three ways:
From the bottom up:
Asian Tacos (chicken with pickled vegetables)
Figgy Piggy Tacos (pulled pork, bacon, fig jam and feta cheese)
Chicken Mango Tacos (chicken, mangos and a mango sauce)
Delicious!
My favorite was the Figgy Piggy but most favored the Asian Tacos
Just looking at the picture and you would swear that we did buy them off of a food truck!

Sides:
Food Trucks do sides -- you need something to go with those tacos or that sandwich
And the truck makes extra money with an add on! 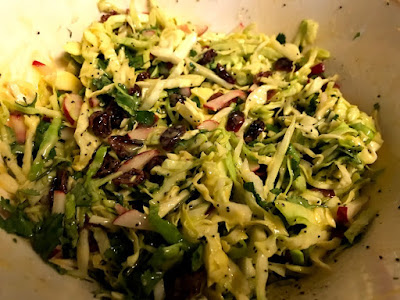 Martha
A slaw from the Maximus Minimus Food Truck in Seattle
sweet and spicy
Cabbage, radishes, cranberries, cilantro all coated with a honey mustard
(and I added poppy seeds for interest because I thought it needed something) 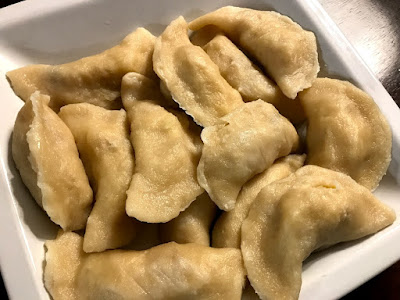 Sara
Potato Pirogies
(And we learned last night that Sara has Polish ancestry!) 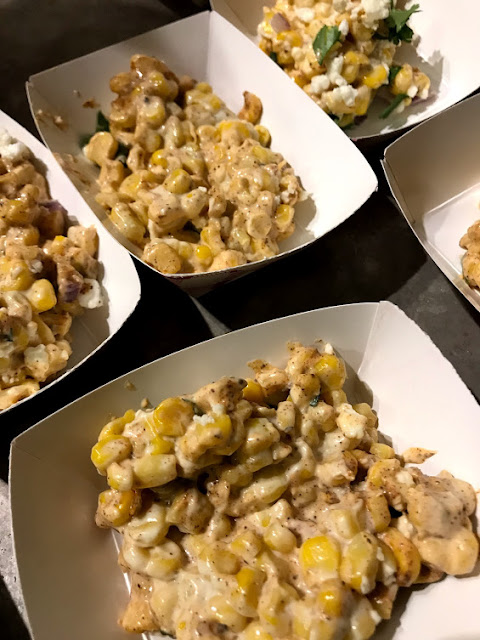 Rhonda
Street corn made the "winter way" -- instead of an ear of corn, frozen corn off the cob
fixed with all of the things that are slathered on the ears -- mayonnaise, cheese, spice
It was really good fixed as a casserole! 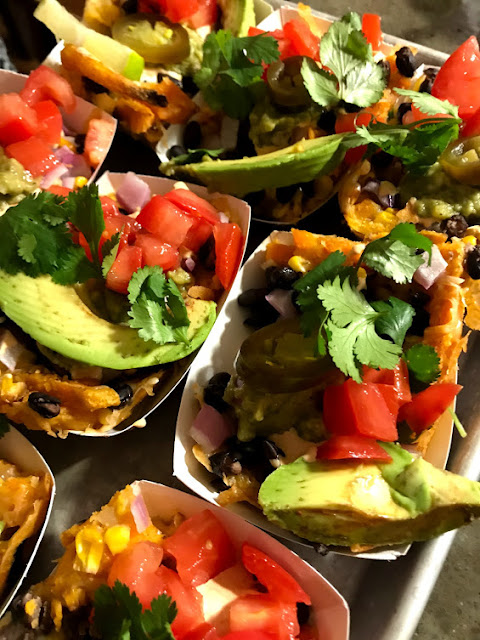 Michelle
I'm sure they have a name other than sweet potatoes covered in great flavors but I missed catching the name last night, I was so intent on eating this boat of deliciousness!
Sweet potatoes, spicy cream, avocado, tomato, corn and beans
Was this ever good!
(and yess at the bottom are sweet potato fries!) 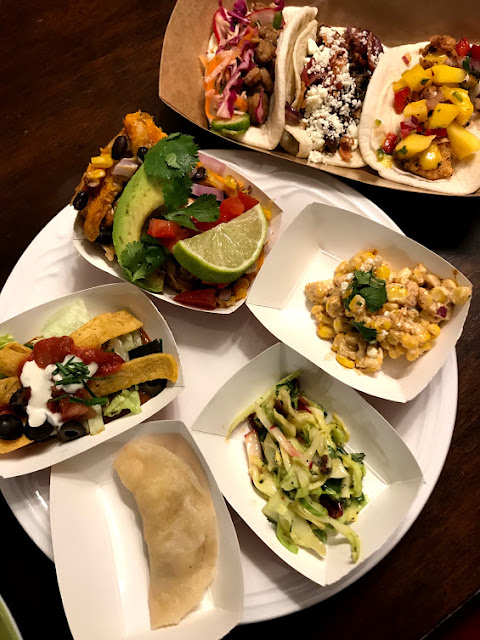 And in serving, Angela thought outside the box as well --
Everything was served in it's own little boat!
Just like if we had gotten it from a Food Truck!
Only we didn't have to stand and eat
And we didn't have to eat only one thing at a time holding it in our hands!
But it was clever and made the evening that much more fun!

But you can't have a Cookbook Book Club event without dessert! 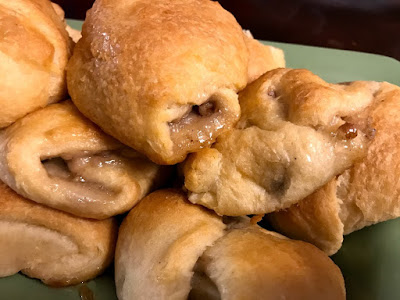 Belynda
Brought banana guava turnovers?
(Again, I was so busy stuffing my face
that I forgot the real name of the recipe!)
They were good and easy even though she couldn't find guava paste and had to sub their suggested apple jelly and lemon juice. 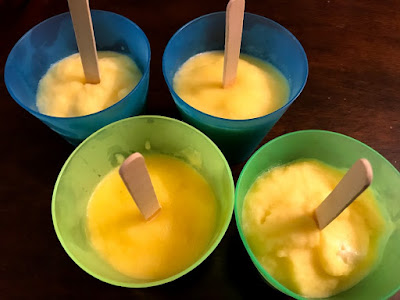 Belynda
Popsicles!     How much fun would they be in the summer!
Pineapple and coconut and I'm not sure what else but several of us thought
they tasted like a Pina colada without the rum!
We debated about making them with the rum but decided
that all we would have is slush as alcohol doesn't freeze! 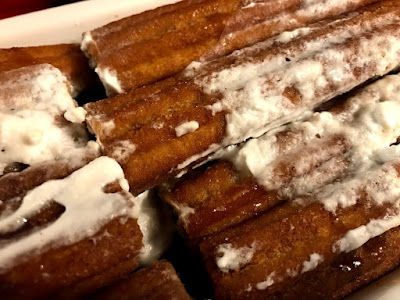 Donna
Brought churros.     They were good and she had a story
to tell about them!    We like stories associated with what we bring!
Donna's was a good one!

We ate, we visited, we left way too full,
although this morning I'm craving the corn and sweet potatoes!

Next month our hostess is Belynda and she has decided that we will make a
dish with an ingredient that we've never used before.
(But something that in all likelihood you can find here in our little town)
We have our assignments, we're searching for the ingredient and recipes!

It's always a fun evening and the food has always been outstanding!
Posted by Martha at 10:14 AM

Your cookbook club has so much fun. I love reading about their meetings/meals.