Back in the 70s, I feel in love with an Aynsley pattern
Pembroke

Alas, I had neither the funds nor the dining room for such fine dishes
And so I lusted after them from afar.

We did buy china eventually but it was Wedgwood not Aysnley
Runnymead Dark Blue
A small set bought on a trip to England
I was giddy to finally have china!

Time passes, kids grow up, and like fine things, too.
Daughter Sarah lusted after my Wedgwood
And when she got engaged, we gifted her with it

Then friend Shirley Ann and I went to a small, out of the way, flea market
in El Dorado Springs
There on a shelf in the back was a set of Pembroke
(the china I had always wanted)
for $30!!!
It was January -- I had just done my January clean
and couldn't imagine bringing more "stuff" home!
So I left it.

Later that week, I realized how dumb I was.
It was a pattern I wanted and it was only $30
for the whole set!!!

I called up friend Shirley Ann and asked her if she wanted to go back to El Dorado the next day --
she would!

We arrive at the flea market, I flew back to the booth with the china and it was still there!

So it came home with me!
It was a mostly set for eight
It was the newer Pembroke -- made in 2000 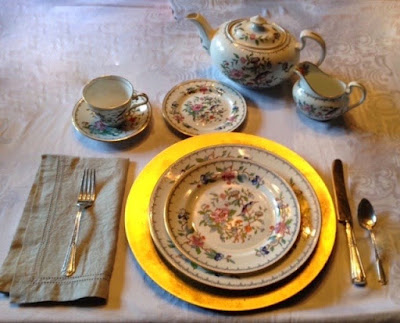 It does set a pretty table
I added the tea pot, cream pitcher and sugar bowl 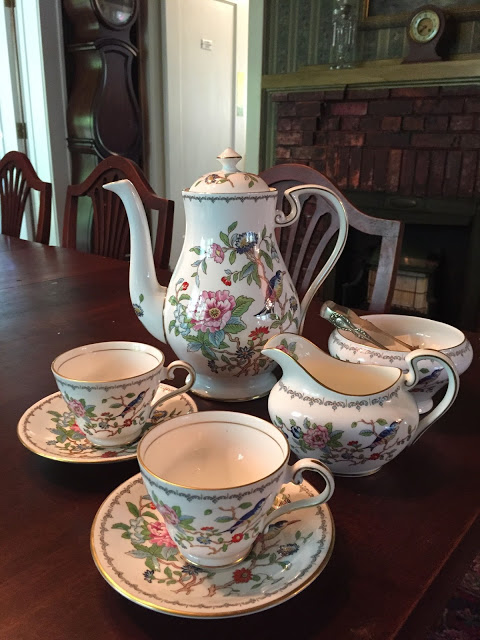 And a coffee pot
(Ebay is wonderful!) 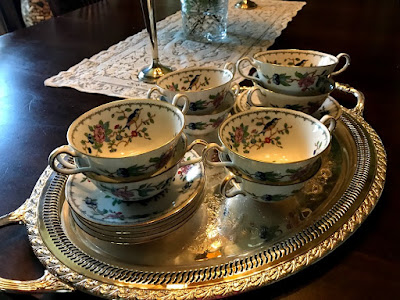 And I also found a great tray at the Estate Sale
When I serve after dinner coffee (whether in china or silver), it's nice to bring the
coffee service to the table on a tray -- a manageable tray -- and the one
seems perfect! 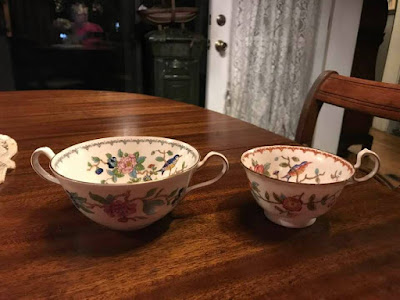 The difference between a cream soup and a tea cup
The soup is much larger and I see things other than soups being served from the cup
Individual cobblers
(filling cooked and warm and topped with a piece of pie pastry baked on a sheet pan)
chocolate mousse, individual floating islands

I was so excited when I found them that my hands were shaking.
You rarely see it in antique shops or flea markets 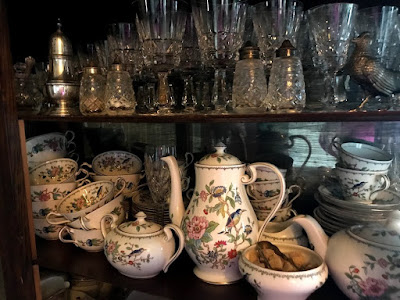 It looks right at home on the Aynsley shelf in the china cabinet!
Posted by Martha at 10:02 PM

I think my hands are shaking too, ha! I can just imagine the excitement of going to that shop and finding this china still there, but to find these cream soups in such a rare pattern, well, don't you just have to assume you were *meant* to find them? (And may I just add that this is such a classic pattern. Soooooo lovely!)

Martha,
An amazing find, indeed!
What a great addition to your set!
Pat

Truly beautiful china and meant for you!

Running with a sharp pencil said...

What a beautiful find! Treasures!

Beautiful pattern and I am so glad you found it. If anyone can find a bargain it is you. You are so lucky in that department. Wish I could come and join you for tea.