I've always been enchanted with fairies and their gardens And way before it became popular, I created one at Linderhof 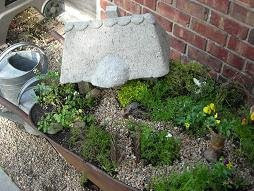 In 2008, I used an old wheelbarrow that Husband Jim had gotten someplace.
For a few years it sat between the drives on the north side of the house and was planted with annuals It's most successful planting, however, was one of pansies one fall By spring it was absolutely beautiful and as I washed the dishes I could see the wheelbarrow of pansies -- it made winter bearable!
I made the fairy house at Red Cedar -- it was a class -- cheaper than what you could buy a comparable house for but not cheap by any means. Fairy houses were rare and costly in 2008. I lined the paths with stone and did plantings. 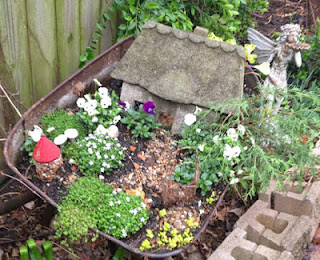 It was a successful garden! But in 2009, I decided to move it. So I put it in the garden by the side fence. I also made it flat rather than leaning. I have a few "things" in the garden now including a potting shed. And a big fairy watches over! 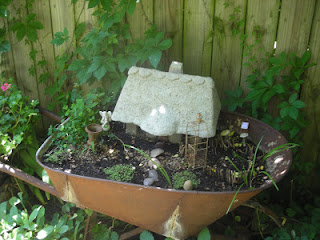 And before 2009 progressed much further, I moved the fairy house -- which isn't as hard as moving a real house. Also there are "things" in the garden -- an arbor, fairies, toadstools! 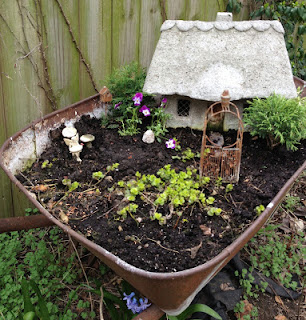 In 2013, the garden is still by the side fence. There are some shrubs as well as pansies and do I spy a bee skep? And a bigger fairy? The sparseness of the 2013 garden was because it was shady and so I moved the garden back to it's original location -- I have a pond -- with a fish and somewhere there are fairies -- but you know they are shy creatures and will hide! 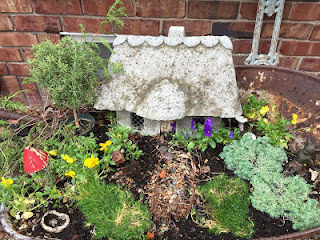 I moved the garden back to the original location --
it isn't "location, location, location" with gardening
but rather "sun, sun, sun"
And it was just too shady by the back fence for anything really to flourish in
the fairy garden.

It seems at home here! 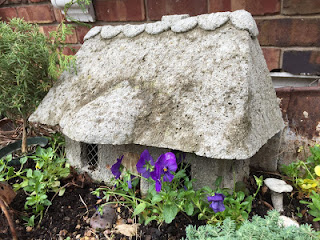 I always enjoy Spring time when the pansies are blooming! 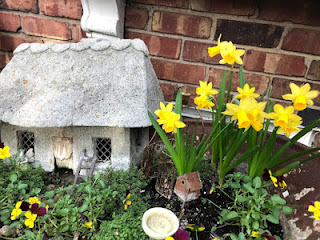 Last year Wal Mart had some wee daffodils and I bought them for the fairy garden. They looked smashing among the pansies and other plantings! 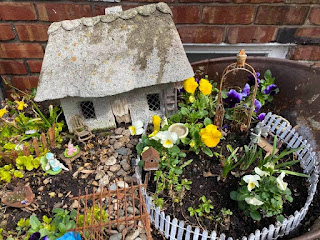 It's 2020 and there are a lot more things in the garden -- more fence, a mailbox (because fairies do get mail), another arbor and a bench in the fenced off garden, a rocker by the front door and a table, chair and wee tea set. The bench, rocker, table, chair and tea set were a 50th anniversary gift last year -- but I don't know from whom. It was wrapped but there was no card! It's a nice day today and the fairies have been busy this morning. They've tidied up their garden a bit. I think that they, too, like the rest of us are homebound. And like fairies always do, when humans are about, they turn to stone!
(That's daughter Sarah's story and she and I stick to it!)


My grands love the fairy garden And they have one of their own. 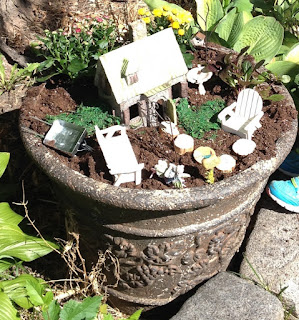 A big pot rather than a wheelbarrow And they play in theirs -- burying the garden tools, wheelbarrow, fairies and even their fairy house! But they always dig it up again. 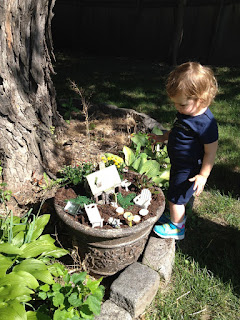 It was Lucy's second birthday present --
Piper got her toy chest
So really, although Lucy shares nicely with Piper -- it's really Lucy's garden 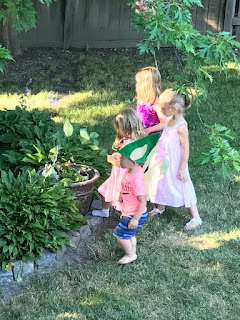 And a few years later at a Piper/Lucy joint birthday party,
the theme was fairies --
guests enjoyed checking out the fairy garden
(and, of course, the fairies turned to stone upon spying humans!)

It's the small magical part of the garden at Linderhof -- this fairy garden. And I must say that usually the fairies are much better garden keepers than I am!

I'm happy to say that a local shop, Redbud, carries Fairy garden supplies
So if you want to build one of your own . . . all it takes is wee plants and a little imagination!
Posted by Martha at 11:15 AM

Martha,
I adore your Fairy Garden @ Linderhof!
You find the most adorable items for its expansion.
Love that the grand Girls have their very own Fairy Garden!
I tried one. . .it was successful while I was still employed @ the School district.
Then, "Mr. Ed" retired and He didn't understand the concept.
He kept adding plantings until he covered up the Fairy.
It was a peaceful chore for me up 'til that time.
I'd much rather "Mr.Ed" enjoy his time out~of~doors.
Thank you for always inspiring!
Pat

So sweet!! My grand made several fairy gardens in our yard last year. She made one in a child size wheelbarrow for our walkway
I love them too.
Cathy

I loved seeing the Fairy Gardens. Perfect for a way to spend some time with happy thoughts. This is something I think I would enjoy...making a special place to go to and decorate and something my grand-daughters would love to visit.

Hi Martha, I love your fairy garden! So adorable!

Your fairy garden is lovely! Such a nice cheerful post.

Lovely fairy garden! Thank you for your posts!
Sips and Smiles,

Your fairy garden is so sweet. I'm delighted to see your posts here again!

What a sweet fairy garden <3