This weekend was my
"Quick Bread"
weekend

None of the recipes, however, from the Betty Crocker cookbook
Not that they aren't good --
I just wanted to try some different ones! 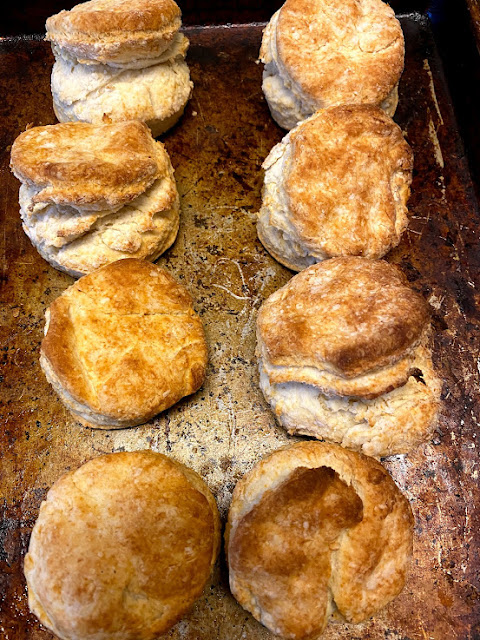 There are so many biscuits out there --
the canned, the frozen
the ones you make with cream
But these were old fashioned biscuits
Made like Grandma made them
except
I used the mixer to incorporate the shortening into the flour
(because I'm an impatient cook and "cut shortening in until the size of peas" means to me,
jawbreaker size if I do it with a pastry cutter or fork -- but with a
mixer -- perfection)

In a large mixing bowl, sift the flour, baking powder and salt.    Lightly mix in the shortening with your fingers.   (I put mine in the mixer and let the mixer do the work).      Stir in the milk mixture, taking care not to overwork the dough.    On a lightly floured surface, roll or pat the dough to 1/2 inch thickness and cut with a 2 1/4 inch floured biscuit cutter (I use my grandmother's).   Place the rounds 1 inch apart on the prepared baking pan.
Bake the biscuits in the preheated oven 10 to 12 minutes until nicely browned.

Last Sunday was Easter
Easter is always ham
And even though I got the smallest, it still is a lot of ham!

Saturday supper was red beans and rice.
A different dish for me for usually I do either butter beans or Great Northerns
with the last of the ham.

But beans were scarce when Husband Jim went to the store and he
scored some red ones as that was all that was available.

So, alas, red beans and rice it was!

And I must admit that it was delicious
and a nice change from the regular ham and beans!

Now you cannot have a pot of dried beans without a pan of cornbread
Another "quick bread". 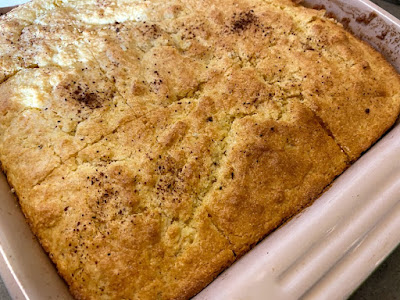 I must admit that we can devour fresh from the oven corn bread.
We eat way more than one piece each!
But there's something about hot cornbread with butter melted into it
that is one of those "heaven on earth" dishes!

I tried a new recipe.
In this time of semi-exile, I've been trying a lot of new recipes.
I thought this was really really good
And it will probably be my "go to" recipe from now on

Sift dry ingredients together, add milk, sour cream, beaten egg and sot butter.    Stir well.    Pour into a greased pan (I used a crockery LeCreuset pan but you can use an iron skillet, iron muffin pans or even iron cornstalk pans) and grate nutmeg over the top.     Bake in a hot oven (425) for 20 minutes or until lightly browned on top.     Serve with butter while still hot (This is the most important sentence of the recipe!)

My favorite, absolute favorite "quick bread" is popovers!
But I don't consider it "quick" for the baking time is usually 30 minutes or so
Not the 12 to 20 that cornbread or biscuits or even muffins take!

Often I come down to fix breakfast and think popovers
and then realize that we'll have to wait a "long time" for these delicious
breakfast breads!

I have my popover pans --
two of them!
That way I can make a dozen if I have company.
But popovers are one quick bread that needs to be eaten the minute it comes from the oven

You rarely see popovers here in restaurants but in Minnesota
where Daughter Sarah lives, it often is the table bread in restaurants.
I adore that tradition -- Sarah not so much -- she's not a popover fan!

And I planned popovers
So they received the first attention
And once they were in the oven, I began to get the rest of breakfast ready 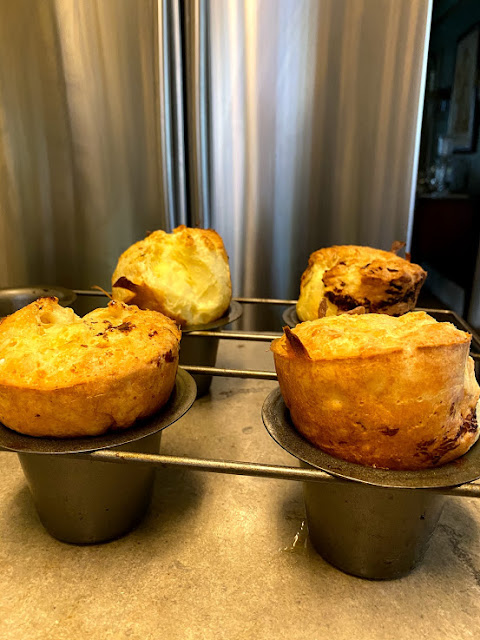 Position the rack in the center of the oven and preheat it to 450.    Generously butter a popover pan or standard muffin tin and put it in the oven to heat.

Whisk together the flour and salt.   In a separate bowl beat the eggs until light but not too fluffy.    Stir in half the milk until smooth.    Gradually mix in the flour, then the remaining milk.    Don't use a whisk or beat the batter at this point (you'll not have good luck with your popovers if you do).  Pour the batter into the hot pan, filling about 2/3 full.    Bake in the center of the oven for about 15 minutes without opening the oven.

Without opening the oven, turn the temperature down to 350 and bake until the popovers are crisp and golden brown (about 20 to 25 minutes).     Make sure the sides are firm and crisp.

So many items on my grocery list are not available - seems Cooks are making the good old-fashion foods from 'scratch' like breads and dry beans. Even rice and flour are hard to find locally. Your posts are so up-lifting and give me new menu ideas. I'm not used to cooking this much and certainly not used to emptying the dishwasher so often.

Quick bread are wonderful...I wonder if I am brave enough to try popovers. They feel so intimidating. But your directions are so clear.......

I'm with you about cornbread and popovers. My current go-to biscuit recipe is made in the food processor, patted out into a rectangle and cut into squares. Super easy. :)
Thanks for the recipes.
Sheila