Herbs and spices are particularly valuable
when cooking at Linderhof

So no store jars or cans of spices on my shelves.

Years ago, Sally gave me the "Mint" jar because she knew I loved blue and white.
Where she got it, I'm not sure
But I did treasure it
And I did put dried mint in it!

And the pretty little herb jar sat alone on the spice shelf
admit clay pots of herbs and glass jars of spices.

A trip (a couple of years ago) to Tuesday Morning
and I found a treasure trove of Spode herb/spice jars
(I bought one of all they had!) 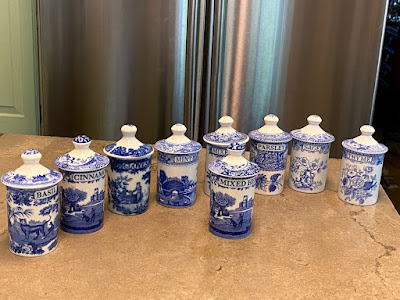 I did order the "Mixed Spice" jar because I like to keep the English Mixed Spice
on hand for I cook a lot from English cookery books and they often call for it. 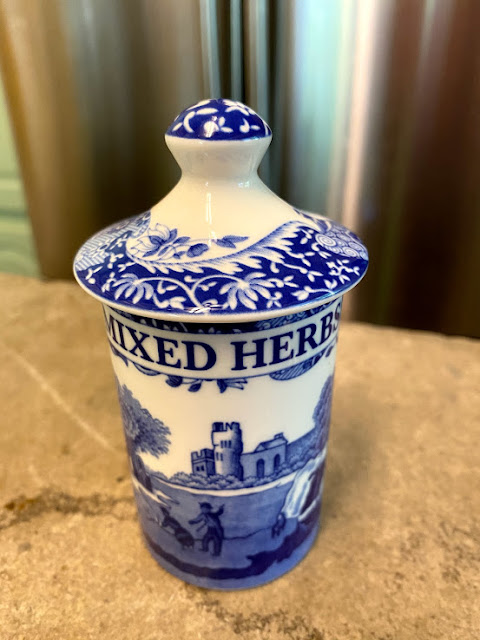 The Mixed Herb jar on Ebay for a very good price (less than what I paid at Tuesday Morning).

I have always kept a jar of mixed herbs.
It's the little bit that I pick from the garden that doesn't get used.
I hate to throw it out so I put it in a saucer until it is dry and then add it to my
"mixed herb jar"
(which until this week was a half-pint canning jar)

I love using mixed herbs for you get a new recipe every time! 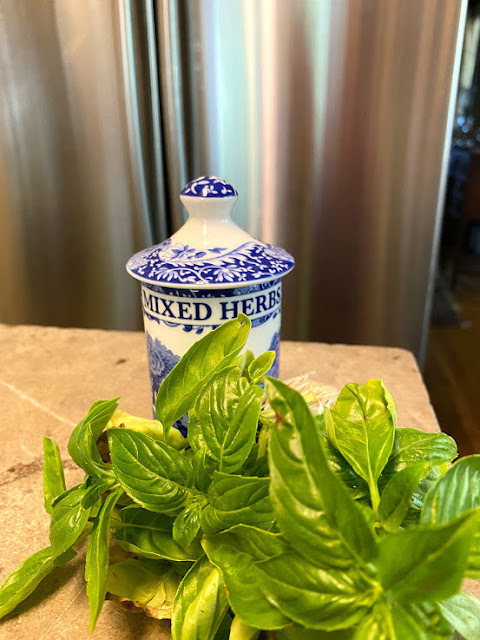 And now my mixture of herbs has it's own classy jar!

And there's some basil to be dried to add to it! 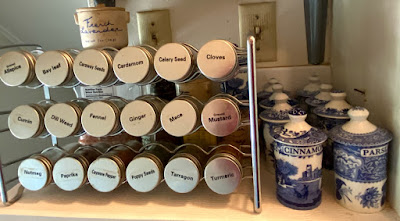 It makes me happy -- the little glass jars full of mostly spices
And the blue and white Spode jars
And way in the back are the clay jars that I've had "forever".

If you don't keep a "mixed herb" jar (whether a pretty Spode one or a plain old canning jar one),
you should -- there's nothing like roasting a chicken breast and sprinkling on some of the mixture from the mixed herb jar.     Next time you do it, it won't taste the same -- that's for sure!
Posted by Martha at 2:29 PM 2 comments:

Back in the day there were book clubs galore
For a mere 99 cents, you could get 4 or 5 hardback "book club" editions
of popular or famous novels and then with the promise to buy 4 or 5 more in the next year (at regular price), you could build your library.

And so because I did,  I got an advertisement for a "cookbook" book club.
That first year of marriage, I desperately wanted to learn how to cook
"gourmet" food
And so I was a sucker -- 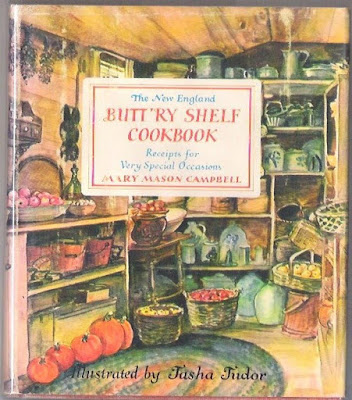 What I loved most was that each chapter was a different "holiday"
And so there was a charming story
And then the "receipts"
which were very good and simple --
country food
New England country food
I loved to cook from that book!
I learned so much! 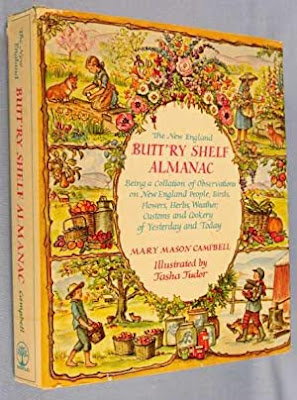 The second book by Mrs. Campbell and again illustrated by her friend and neighbor,
Tasha Tudor

I loved it as much as the first --
It was a month by month book of birds and flowers and a story
With receipts that went with the story
(July was canning and so a corn relish and pickle receipt were given, for example)

And I learned something new about the birds and the flowers

Sometime with three moves
(one long distance move from Kansas City to Nevada, Missouri),
I lost The Butt'ry Shelf Cookbook

And back then there was no Amazon or internet to find a copy.

I got brave and wrote Mrs. Campbell
(she had her address, at least town and state in the forward of the Almanac),
telling her how much I enjoyed both of her books but that somehow, the
Cookbook had gotten misplaced and did she have a copy she could sell me.

And yes she did and by the way, she had another book, 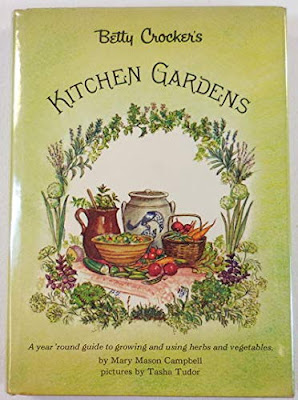 And she had a copy of that for sale and would I be interested.

I loved the other two books and new I would love the third one
And so I said yes.

She autographed them, included a clipping of rosemary
And I absolutely fell in love
with the third book.

It is my herbal bible!

Not many receipts but more a gardening book
And it's because of her and this book that I have a herb garden!

Sometime later, I found she wrote a fourth book --
Yes, a long time later because I found this on ebay
and bought it 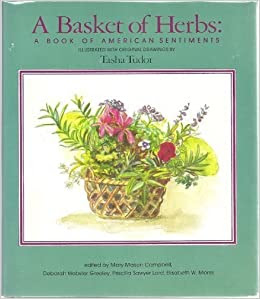 So my collection is complete!

But this isn't a post really about Mary Mason Campbell
it's a post about a Fifty Year Adventure!

I didn't want to have anything to do with it!
Too "fussy" for me
But everytime I picked up
The Butt'ry Shelf Cookbook
I was drawn to the receipt.
And wanted so to make it!
Wanted to taste it! 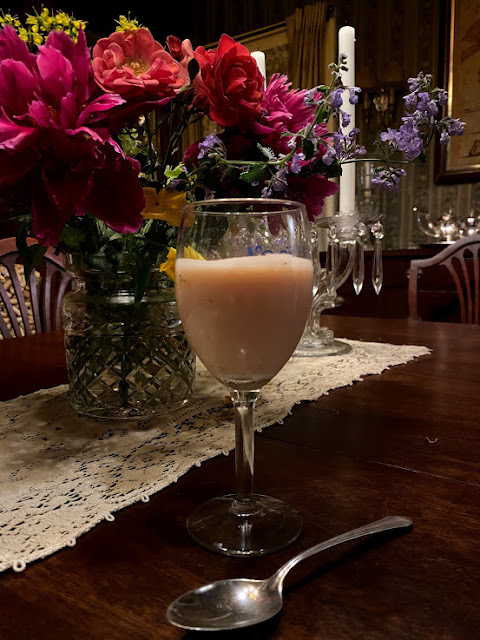 "The little girl always chose the dessert she loved even more than cake.   It was just called Pink Pudding.   It always looked very beautiful turned out on the pink Haviland chop plate with pink candles lighted around it and a garnish of strawberries or little pink rosebuds or sweet peas.    Best of all, she was allowed to have all she could eat of it, which was quite a lot.   (It still is many years later."

(In a tin (or aluminum) cup soak 1 T. unflavored gelatin in 1/4 cup cold water until soft, then melt it over boiling water until gelatin is very  thin and liquid.

Squeeze the juice of 2 oranges and 1 lemon and pour it over 1 cup sugar with the grated rind of 1 orange added.    Stir until sugar is well dissolved.    Add 1/2 t. vanilla, 1/4 t. almond flavoring and a few grains of salt.     Add some pink food coloring and mix well.

Whip 1 cup heavy cream very stiff, then fold int he quit juice mixture and last the melted gelatin.    Pour into a small fancy mold or into individual molds and put in the icebox for several hours or until well set.

This receipt makes a serving for four, and may well be doubled to put into a larger fancy mold.     When serving, invert on a pretty plate.    Tiny birthday candles may be placed around the top of the pudding.     Fresh flowers arranged around the edge o the plate add to the festivity.

And like other receipts in Mrs. Campbell's books,
I'll make this again!
Her receipts are never
"one and done"

Saturday and now Sunday
are our days for
breakfasts.

The rest of the week we have juice, cereal and toast
with tea and coffee 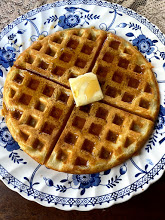 WAFFLES
From scratch not a mix
Betty Crocker's recipe
made in my 50+ year old waffle iron
A wedding gift from my mother! 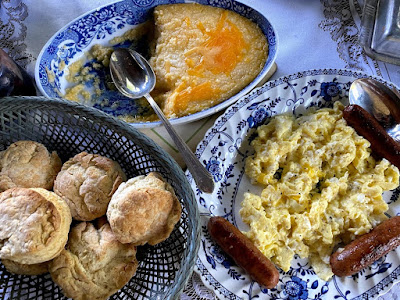 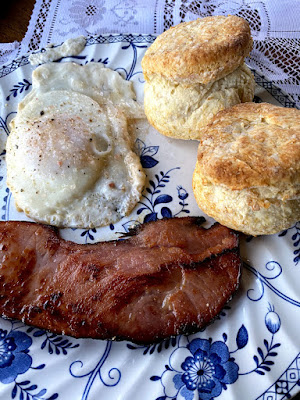 SEMI-SOUTHERN
Which means meat, biscuits and eggs
without grits
The meat this time is ham
And I do think ham is Husband Jim and my favorite
breakfast meat 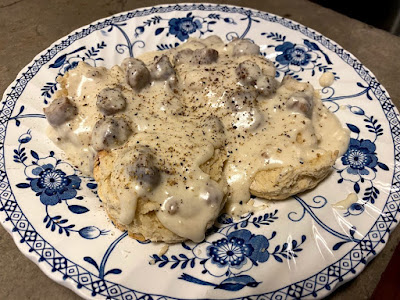 BISCUITS AND GRAVY
Need I say more
Homemade biscuits, of course,
with a creamy sausage gravy
It is definitely comfort food on a plate! 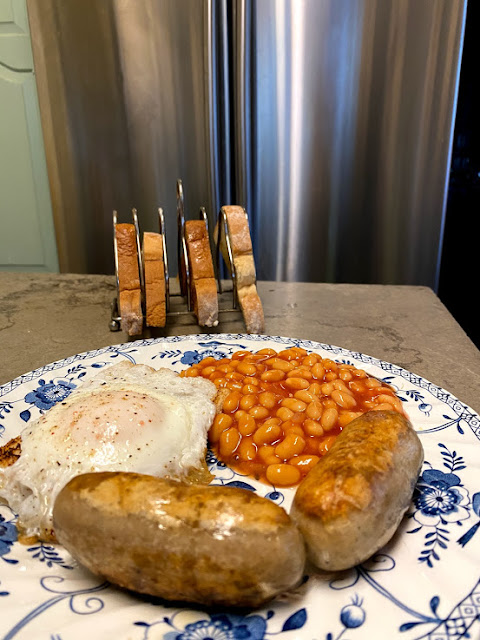 FULL ENGLISH
This is the breakfast we so enjoyed in England
sausages (real English sausages), beans (Heinz in the blue can), eggs
served over a piece of fried bread
Toast in the toast cooler (Jim likes really hot toast -- the "toast cooler"
cools it off faster and it is his nickname for the toast rack that you find
on every English breakfast table) 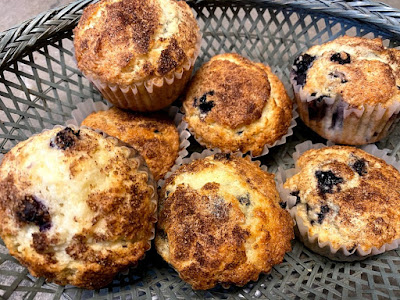 MUFFINS
I prefer blueberry and I think they pair really well with a
big plate of scrambled eggs with chives.
A simpler breakfast than most
And one that is not always limited to Saturday.
The leftover muffins go really well with tea!

We enjoy a second cup of coffee and tea
and often watch the birds for a while
before we begin our day --
especially on the weekend when we have a
BIG BREAKFAST!
Posted by Martha at 2:24 PM 4 comments: