It has been a strange year for the Cookbook Club
We had our meeting in February (here at Linderhof)
And then COVID hit!
We canceled March and April
Got together this summer OUTDOORS and masked
and our themes were outdoor food -- picnics, potlucks, BBQs
We social distanced but it was good to be able to get together with people and visit
Our last Cookbook Club of the year
(because we meet on the LAST Thursday of the month
and in November and December that's never doable)
It was at Barbara's
Barbara, who makes the trek to Fort Scott every month
It was our turn to trek to her!!!
It was inside, but we stayed masked except when we ate
Barbara had the food spread out
As well as our place settings
No big table (which is what we always did pre COVID)
but rather smaller tables set around her spacious living room
And there was another reason for Barbara to take a turn
She and her husband built a new house this spring
And got to take out of storage all of the things that were in storage
It was great to see Barbara's house and her lovely things
It was also great to get together with some great gals and discuss our favorite subject --
FOOD
The theme was tea -- a combination of high tea/afternoon tea 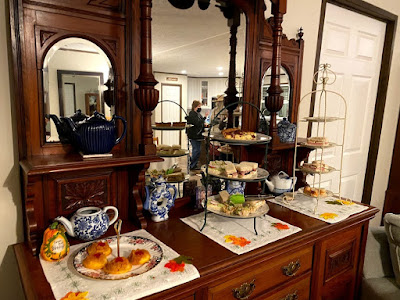 Her lovely English sideboard was one "station" for treats 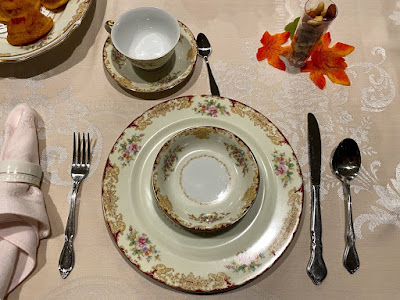 At each place was her lovely Noritake china, a napkin in a ring, a matching tea cup

And the loveliest of linens on each table 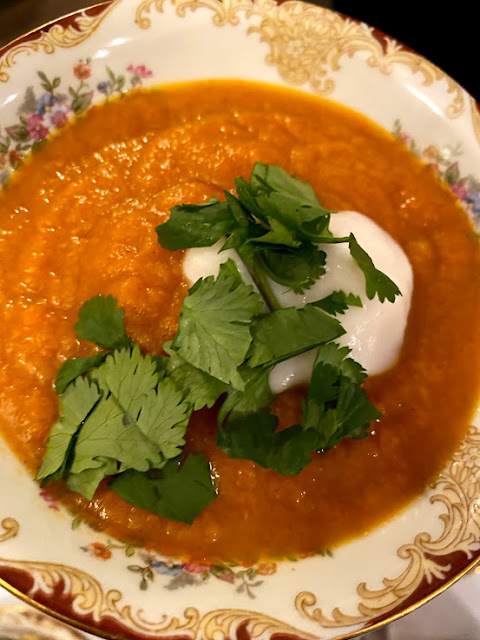 We started with a carrot ginger soup

Which could be topped with cilantro, coconut cream and pine nuts

It was a great flavor combination and a wonderful soup

And a great way to start a tea! 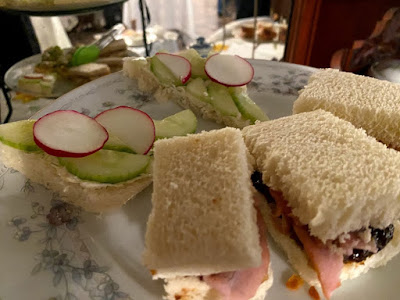 A tea must have cucumber sandiwches

And she found a ham, apple butter and brie sandwich as a second option. 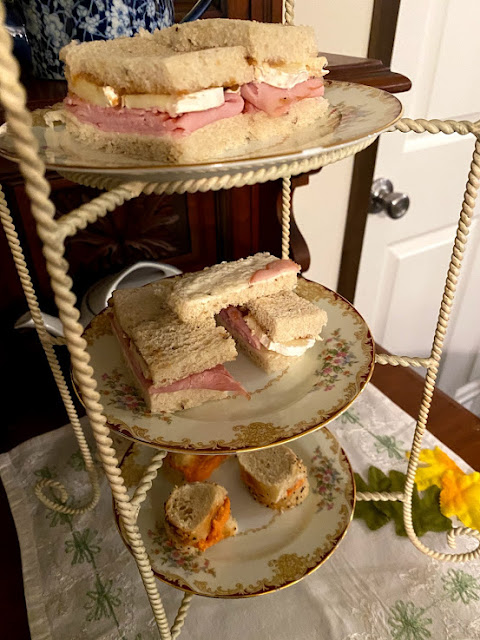 Angela made sandwiches as well

(In fact, we had more sandwich makers than dessert makers -- 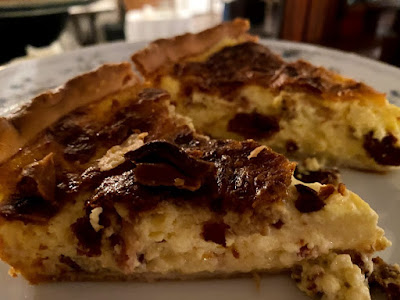 Rita had never made quiche.    Rita cooks a lot and I could not believe that . . . except Joe, her husband, doesn't like quiche (but how does he know -- she said -- he's never tasted it)

It was yummy with bacon and Swiss

And hopefully, she will make more quiche! 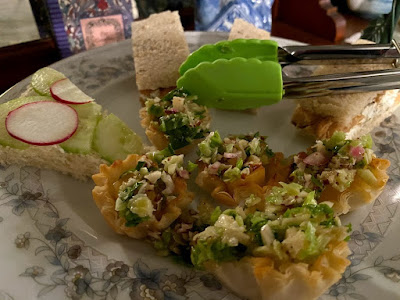 Barbara found a recipe in tea time magazines for the little phyllo pastry cups filled with cheese and a broccoli mixture.

(I think I ate more than one!) 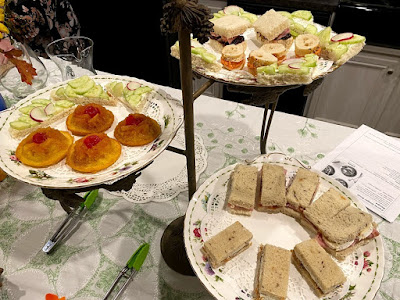 One of the food "stations"

My smoked salmon sandwiches are on the lower right 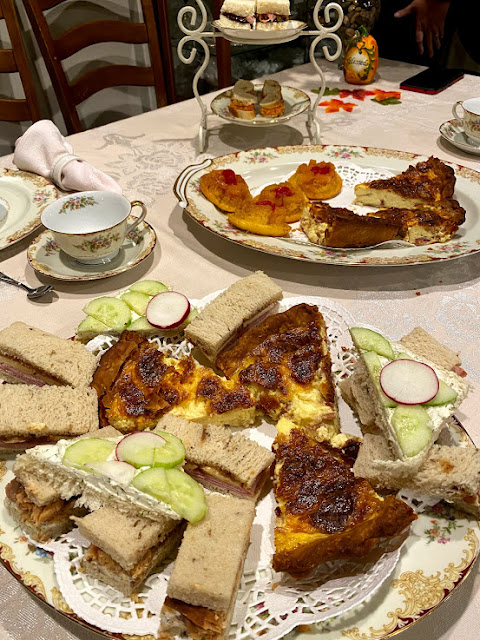 with sandwiches, and quiche 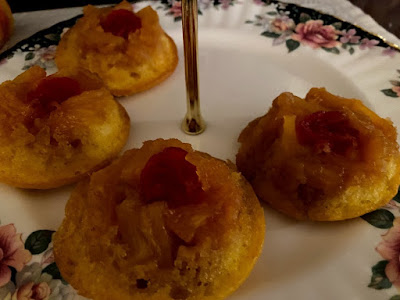 Donna made pineapple upside down cakelettes 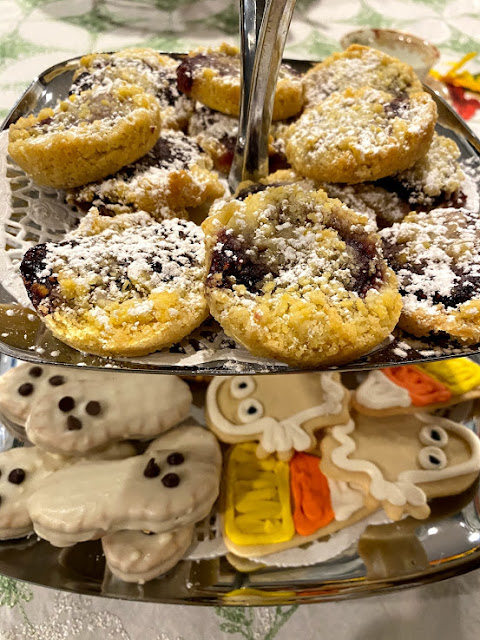 that is a copycat of the bars sold at Costco

And, of course, Michelle would have leftover cookies to add to her dessert plates. 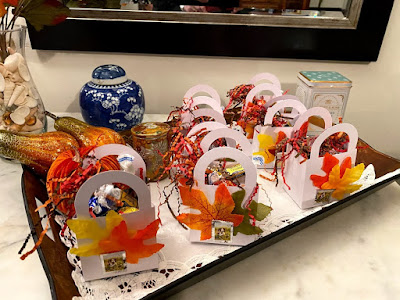 Barbara had treats for us to take home!
It was a fun evening
We're hoping that come January we can have a more normal
Cookbook Club get together
We're already talking that one of the themes next year should be
"School Cafeteria Food"
Posted by Martha at 2:33 PM

Oh how lovely your tea party looks!! So many beautiful and tantalizing goodies. Wish I was there!

Im attempting to figure out how to subscribe to the RSS feeds, but cannot figure it out. Some help would be awesome Thanks

UA coats for men are worked to secure. Men's jackets to safeguard contrary to the natural flow, downpour coats to keep you dry, and men's jackets and coats. Covers and Jackets. There's a motivation behind why our assortment of men's outerwear is so cherished: elite execution converges with high style to make speculation coats.

From the USA, UK, Canada, and throughout the world, you may send gifts to Pakistan! Since 1989, Giftkarte Express has been sending happy and adoring notes. We operate a gift shop.