I'm not a fan of "pumpkin spice" unless there is pumpkin in there too!!!
And in October, we certainly have our fill of all things pumpkin!!! 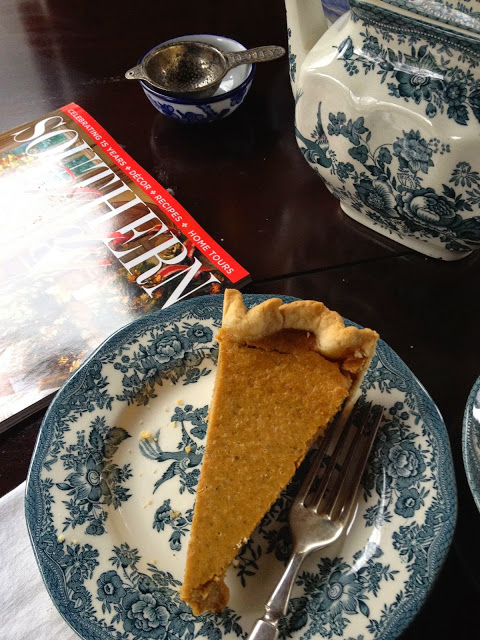 Pumpkin pie . . . the first always made for Halloween.     We leave the candy bars to the kids while we finish our traditional bowl of chili with a slice of pumpkin pie.    An old recipe for rather than evaporated milk, it has cream.    From back in the days when families keep cows and there was always cream in the house. 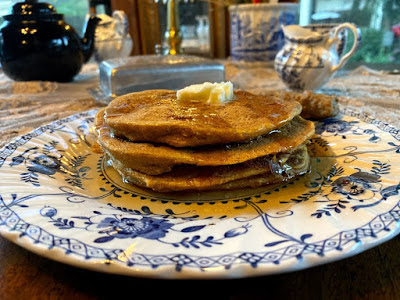 Pumpkin pancakes . . . that little bit of pumpkin leftover from baking bread or scones goes great with pancake batter to make the breakfast (or supper) pancakes.     Adding a little cinnamon to the pure maple syrup ups the ante a little! 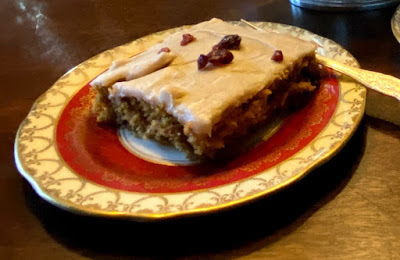 Pumpkin bars . . . everyone has their favorite recipe for pumpkin bars and you see them a lot in October. But they are a great dessert or tea time treat and easy to make! 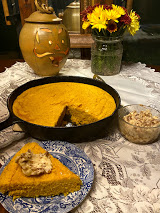 Pumpkin cornbread . . . I couldn't imagine but I tried the recipe and it is delicious.   Probably the best cornbread I've made.    There is no "pumpkin spice" in it, just pumpkin and because of the moistness of the pumpkin it was a good keeper.    Plus there is no flour in it -- just cornmeal so it's gluten free! 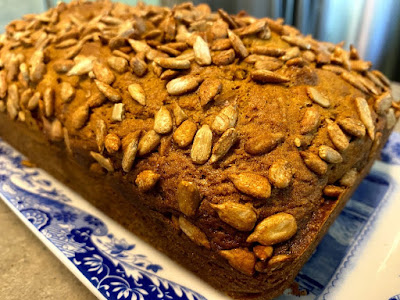 Starbucks Pumpkin Bread . . . a new one this year but I adore other Starbucks treats and thought I would try a copycat recipe for their pumpkin bread.    It's good and the seeds on the top are a nice touch.    But I really do like my old had forever recipe for pumpkin bread the best. 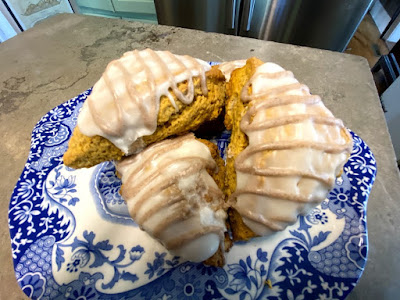 Starbucks Pumpkin Scones . . . I'm not much on scones that you buy in bakeries here.    Too dry.  I'd rather have a muffin!     But these were good and moist and I loved the double drizzle on them -- a vanilla glaze and then a cinnamon piping.     They did go very well with breakfast coffee and afternoon tea! 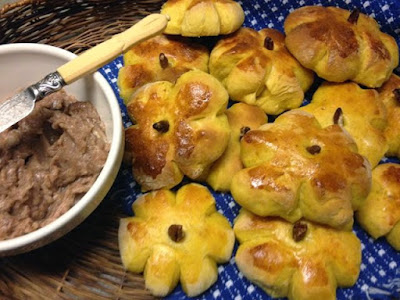 Pumpkin Bread . . . A different kind of pumpkin bread because it's a yeast bread with pumpkin in it.   It goes very well with a maple cinnamon butter.     The rolls shaped like little pumpkins  would add a bit of whimsey to the Thanksgiving table.      Served with a plain butter, they're really good with a big bowl of fall soup.
Posted by Martha at 8:37 AM

Such wonderful baking ideas for the months of October and November. The food looked so delicious.

Mmm, what a delicious looking post! I love anything pumpkin and your photos makes you want to go bake. We always have pumpkin pie for Thanksgiving which is in October here in Canada. Then the pumpkin goodies keep coming because it is so good in so many different things. I have never made a pumpkin cornbread. What a wonderful idea! I'll have to try making one.

Thanks for sharing all your pumpkin goodies! You do such a nice job photographing food and table settings - as well as describing how the food tastes. I like the idea of cream in a pumpkin pie. I'll have to look for a similar recipe in some of my older communicty/church cookbooks.

I think the warmth of your home and the encouragement to create warmth in our own homes is greatlyl needed these days. Thank you, Martha.

It is perfect time to make a few plans for the future and it is time to be happy. I have learn this submit and if I may I want to recommend you some interesting issues or advice.

A puffer coat (likewise called a cushioned coat) is a sort of protected coat that is perfect for cold temperatures.