Between soup and bouillon
And what you serve them in!
Back in the day, dinner parties would often start with a cup of bouillon
What is bouillon?    How does it differ from soup?
Bouillon is a savory liquid made of water in which bones, meat or vegetables have been simmered.
It could be beef -- it could be chicken
But for dinner parties beef was the bouillon of choice.
But you couldn't just serve bouillon in a soup bowl --
No, you had to have a special dish for it 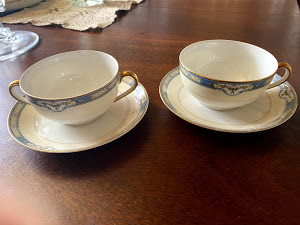 It is the same size and shape as a cup

The only difference being that it has a handle on both sides. 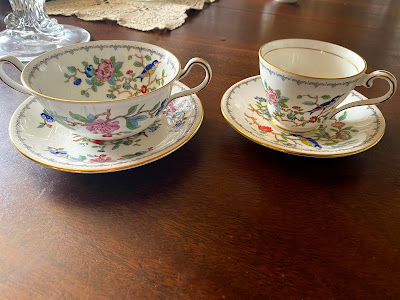 It's a cream soup bowl
No hostess would think of serving cream soups in a bouillon cup
nor bouillon in a cream soup bowl
As you can see, it's bigger and wider than a regular cup
It holds much more soup
But then a small cup of bouillon would probably satisfy you
While you would like a little more cream soup 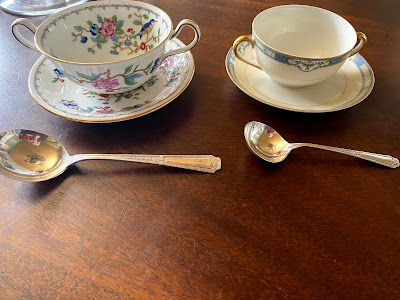 And they each came with their own spoon
A spoon for cream soup on the left and a bouillon spoon on the right
(it's a wee spoon compared to the soup spoon)
I love to compare the sizes
I am sure sone china comes with both a bouillon cup and a cream soup bowl
But neither of mine did -- it was one or the other!
For those interested -- the pattern on the left is Aynsley Pembroke while the pattern on the right is Noritake Duluth 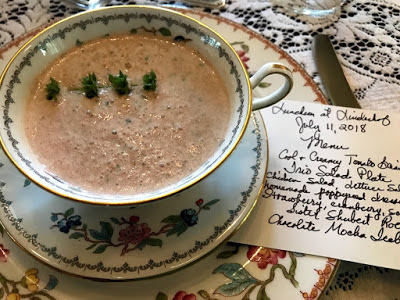 There is nothing like a bowl of cream soup
to start a luncheon or dinner!
Posted by Martha at 5:08 PM

Well, I just got an education! Thanks for the wonderful tutorial! I knew of the soup bowls, but not the bouillon ones!!
Susan

I enjoyed this post a lot, Martha. Your commitment to tablescaping and dining elegance makes for a wonderful read!